Chapter: Introduction to the Design and Analysis of Algorithms : Coping with the Limitations of Algorithm Power

Approximation Algorithms for the Knapsack Problem

Greedy Algorithms for the Knapsack Problem We can think of several greedy approaches to this problem. One is to select the items in decreasing order of their weights; however, heavier items may not be the most valuable in the set.

Approximation Algorithms for the Knapsack Problem

The knapsack problem, another well-known NP-hard problem, was also intro-duced in Section 3.4: given n items of known weights w1, . . . , wn and values v1, . . . , vn and a knapsack of weight capacity W, find the most valuable sub-set of the items that fits into the knapsack. We saw how this problem can be solved by exhaustive search (Section 3.4), dynamic programming (Section 8.2), and branch-and-bound (Section 12.2). Now we will solve this problem by approx-imation algorithms.

Step 2 Sort the items in nonincreasing order of the ratios computed in Step 1. (Ties can be broken arbitrarily.)

EXAMPLE 5 Let us consider the instance of the knapsack problem with the knapsack capacity 10 and the item information as follows: 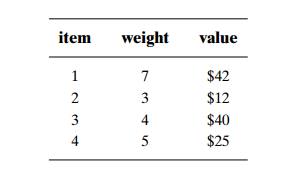 Does this greedy algorithm always yield an optimal solution? The answer, of course, is no: if it did, we would have a polynomial-time algorithm for the NP-hard problem. In fact, the following example shows that no finite upper bound on the accuracy of its approximate solutions can be given either.

Since the items are already ordered as required, the algorithm takes the first item and skips the second one; the value of this subset is 2. The optimal selection con-sists of item 2 whose value is W. Hence, the accuracy ratio r(sa) of this approximate solution is W/2, which is unbounded above.

It is surprisingly easy to tweak this greedy algorithm to get an approximation algorithm with a finite performance ratio. All it takes is to choose the better of two alternatives: the one obtained by the greedy algorithm or the one consisting of a single item of the largest value that fits into the knapsack. (Note that for the instance of the preceding example, the second alternative is better than the first one.) It is not difficult to prove that the performance ratio of this enhanced greedy algorithm is 2. That is, the value of an optimal subset s∗ will never be more than twice as large as the value of the subset sa obtained by this enhanced greedy algorithm, and 2 is the smallest multiple for which such an assertion can be made.

It is instructive to consider the continuous version of the knapsack problem as well. In this version, we are permitted to take arbitrary fractions of the items given. For this version of the problem, it is natural to modify the greedy algorithm as follows.

Step 2 Sort the items in nonincreasing order of the ratios computed in Step 1. (Ties can be broken arbitrarily.)

For example, for the four-item instance used in Example 5 to illustrate the greedy algorithm for the discrete version, the algorithm will take the first item of weight 4 and then 6/7 of the next item on the sorted list to fill the knapsack to its full capacity.

It should come as no surprise that this algorithm always yields an optimal solution to the continuous knapsack problem. Indeed, the items are ordered according to their efficiency in using the knapsack’s capacity. If the first item on the sorted list has weight w1 and value v1, no solution can use w1 units of capacity with a higher payoff than v1. If we cannot fill the knapsack with the first item or its fraction, we should continue by taking as much as we can of the second-most efficient item, and so on. A formal rendering of this proof idea is somewhat involved, and we will leave it for the exercises.

Note also that the optimal value of the solution to an instance of the contin-uous knapsack problem can serve as an upper bound on the optimal value of the discrete version of the same instance. This observation provides a more sophisti-cated way of computing upper bounds for solving the discrete knapsack problem by the branch-and-bound method than the one used in Section 12.2.

Approximation Schemes We now return to the discrete version of the knap-sack problem. For this problem, unlike the traveling salesman problem, there exist polynomial-time approximation schemes, which are parametric families of algo-rithms that allow us to

where k is an integer parameter in the range 0 ≤ k < n. The first approximation scheme was suggested by S. Sahni in 1975 [Sah75]. This algorithm generates all subsets of k items or less, and for each one that fits into the knapsack it adds the remaining items as the greedy algorithm would do (i.e., in nonincreasing order of their value-to-weight ratios). The subset of the highest value obtained in this fashion is returned as the algorithm’s output.

EXAMPLE 7 A small example of an approximation scheme with k = 2 is pro-vided in Figure 12.16. The algorithm yields {1, 3, 4}, which is the optimal solution for this instance.

You can be excused for not being overly impressed by this example. And, indeed, the importance of this scheme is mostly theoretical rather than practical. It lies in the fact that, in addition to approximating the optimal solution with any predefined accuracy level, the time efficiency of this algorithm is polynomial in n. Indeed, the total number of subsets the algorithm generates before adding extra elements is 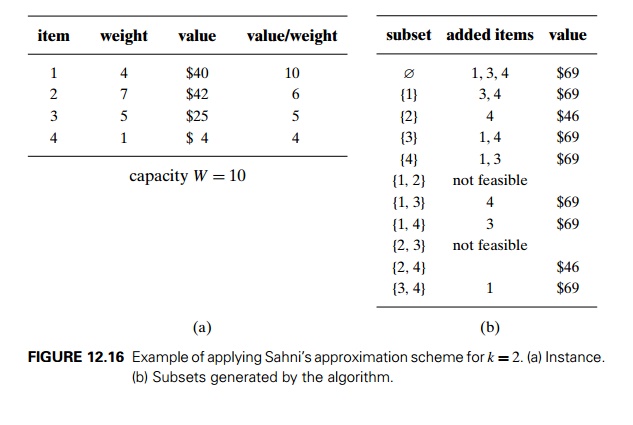 For each of those subsets, it needs O(n) time to determine the subset’s possible extension. Thus, the algorithm’s efficiency is in O(knk+1). Note that although it is polynomial in n, the time efficiency of Sahni’s scheme is exponential in k. More sophisticated approximation schemes, called fully polynomial schemes, do not have this shortcoming. Among several books that discuss such algorithms, the monographs [Mar90] and [Kel04] are especially recommended for their wealth of other material about the knapsack problem.

a. Apply the nearest-neighbor algorithm to the instance defined by the inter-city distance matrix below. Start the algorithm at the first city, assuming that the cities are numbered from 1 to 5.

b. Compute the accuracy ratio of this approximate solution.

a. Write pseudocode for the nearest-neighbor algorithm. Assume that its input is given by an n × n intercity distance matrix.

What is the time efficiency of the nearest-neighbor algorithm?

Prove that making a shortcut of the kind used by the twice-around-the-tree algorithm cannot increase the tour’s length in a Euclidean graph.

What is the time efficiency class of the greedy algorithm for the knapsack problem?

Prove that the performance ratio RA of the enhanced greedy algorithm for the knapsack problem is equal to 2.

Consider the greedy algorithm for the bin-packing problem, which is called the first-fit (FF ) algorithm: place each of the items in the order given into the first bin the item fits in; when there are no such bins, place the item in a new bin and add this bin to the end of the bin list.

Apply FF to the instance

and determine whether the solution obtained is optimal.

Prove that FF is a 2-approximation algorithm.

The first-fit decreasing (FFD) approximation algorithm for the bin-packing problem starts by sorting the items in nonincreasing order of their sizes and then acts as the first-fit algorithm.

Apply FFD to the instance

and determine whether the solution obtained is optimal.

Does FFD always yield an optimal solution? Justify your answer.

Prove that FFD is a 1.5-approximation algorithm.

Run an experiment to determine which of the two algorithms—FF or FFD—yields more accurate approximations on a random sample of the problem’s instances.

a. Design a simple 2-approximation algorithm for finding a minimum vertex cover (a vertex cover with the smallest number of vertices) in a given graph.

a. Design a polynomial-time greedy algorithm for the graph-coloring prob-lem.

Show that the performance ratio of your approximation algorithm is in-finitely large.