Properly obtained and processed specimens for culture frequently yield reliable information about the cause of infection.

Properly obtained and processed specimens for culture frequently yield reliable information about the cause of infection. The lack of a confirmatory microbiologic diagnosis may be due to the following:

1. Sample error, eg, obtaining cultures after antimicrobial agents have been administered, or contamination of specimens sent for culture

2. Noncultivable or slow-growing organisms (Histoplasma capsula-tum, Bartonella or Brucella species), in which cultures are oftendiscarded before sufficient growth has occurred for detection

3. Requesting bacterial cultures when infection is due to other organisms

Even in the setting of a classic infectious disease for which isolation techniques have been established for decades (eg, pneu-mococcal pneumonia, pulmonary tuberculosis, streptococcal pharyngitis), the sensitivity of the culture technique may be inad-equate to identify all cases of the disease.

The results of these tests can then be correlated with known drug concentrations in various body compartments. Only MICs areroutinely measured in most infections, whereas in infections in which bactericidal therapy is required for eradication of infection (eg, meningitis, endocarditis, sepsis in the granulocytopenic host), MBC measurements occasionally may be useful.

For some bacteria (eg, Haemophilus species), the susceptibility pat-terns of strains are similar except for the production of β lacta-mase. In these cases, extensive susceptibility testing may not be required, and a direct test for β lactamase using a chromogenic β-lactam substrate (nitrocephin disk) may be substituted.

Synergy studies are in vitro tests that attempt to measure synergis-tic, additive, indifferent, or antagonistic drug interactions. In general, these tests have not been standardized and have not cor-related well with clinical outcome. (See section on Antimicrobial Drug Combinations for details.)

The therapeutic response may be monitored microbiologically or clinically. Cultures of specimens taken from infected sites should eventually become sterile or demonstrate eradication of the patho-gen and are useful for documenting recurrence or relapse. Follow-up cultures may also be useful for detecting superinfec-tions or the development of resistance. Clinically, the patient’s systemic manifestations of infection (malaise, fever, leukocytosis) should abate, and the clinical findings should improve (eg, as shown by clearing of radiographic infiltrates or lessening hypox-emia in pneumonia).

The duration of definitive therapy required for cure depends on the pathogen, the site of infection, and host factors (immunocom-promised patients generally require longer courses of treatment). Precise data on duration of therapy exist for some infections (eg, streptococcal pharyngitis, syphilis, gonorrhea, tuberculosis, and cryptococcal meningitis). In many other situations, duration of therapy is determined empirically. For recurrent infections (eg, sinus-itis, urinary tract infections), longer courses of antimicrobial therapy or surgical intervention are frequently necessary for eradication.

When the patient has an inadequate clinical or microbiologic response to antimicrobial therapy selected by in vitro susceptibility testing, systematic investigation should be undertaken to deter-mine the cause of failure. Errors in susceptibility testing are rare, but the original results should be confirmed by repeat testing. Drug dosing and absorption should be scrutinized and tested directly using serum measurements, pill counting, or directly observed therapy.

The clinical data should be reviewed to determine whether the patient’s immune function is adequate and, if not, what can be done to maximize it. For example, are adequate numbers of granulocytes present and are HIV infection, malnutrition, or underlying malignancy present? The presence of abscesses or for-eign bodies should also be considered. Finally, culture and suscep-tibility testing should be repeated to determine whether superinfection has occurred with another organism or whether the original pathogen has developed drug resistance.

The time course of drug concentration is closely related to the anti-microbial effect at the site of infection and to any toxic effects. Pharmacodynamic factors include pathogen susceptibility testing, drug bactericidal versus bacteriostatic activity, drug synergism, antag-onism, and postantibiotic effects. Together with pharmacokinetics,pharmacodynamic information permits the selection of optimal anti-microbial dosage regimens. 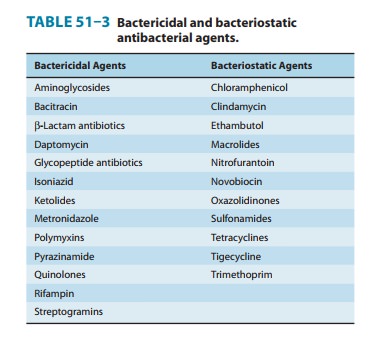 The classification of antibacterial agents as bactericidal or bac-teriostatic has limitations. Some agents that are considered to be bacteriostatic may be bactericidal against selected organisms. On the other hand, enterococci are inhibited but not killed by vanco-mycin, penicillin, or ampicillin used as single agents.

For drugs whose killing action is time-dependent, bactericidal activity continues as long as serum concentrations are greater than the MBC. Drug concentrations of time-dependent killing agents that lack a postantibiotic effect should be maintained above the MIC for the entire interval between doses.

Persistent suppression of bacterial growth after limited exposure to an antimicrobial agent is known as the postantibiotic effect (PAE). The PAE can be expressed mathematically as follows:

Proposed mechanisms include (1) slow recovery after reversible nonlethal damage to cell structures; (2) persistence of the drug at a binding site or within the periplasmic space; and (3) the need to synthesize new enzymes before growth can resume. Most antimi-crobials possess significant in vitro PAEs (≥ 1.5 hours) against susceptible gram-positive cocci (Table 51–4). Antimicrobials with significant PAEs against susceptible gram-negative bacilli are lim-ited to carbapenems and agents that inhibit protein or DNA synthesis. 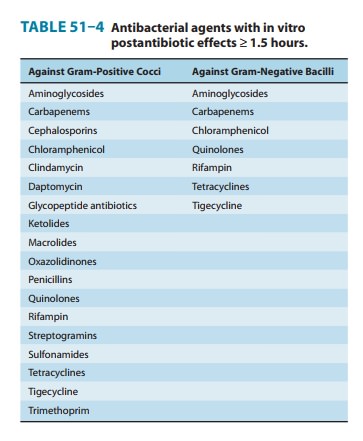 In vivo PAEs are usually much longer than in vitro PAEs. This is thought to be due to postantibiotic leukocyte enhancement(PALE) and exposure of bacteria to subinhibitory antibiotic con-centrations. The efficacy of once-daily dosing regimens is in part due to the PAE. Aminoglycosides and quinolones possess concen-tration-dependent PAEs; thus, high doses of aminoglycosides given once daily result in enhanced bactericidal activity and extended PAEs. This combination of pharmacodynamic effects allows aminoglycoside serum concentrations that are below the MICs of target organisms to remain effective for extended periods of time.

Many antimicrobial agents have similar pharmacokinetic proper-ties when given orally or parenterally (ie, tetracyclines, trimetho-prim-sulfamethoxazole, quinolones, chloramphenicol, metronid-azole, clindamycin, rifampin, linezolid, and fluconazole). In most cases, oral therapy with these drugs is equally effective, is less costly, and results in fewer complications than parenteral therapy.

The intravenous route is preferred in the following situations: (1) for critically ill patients; (2) for patients with bacterial menin-gitis or endocarditis; (3) for patients with nausea, vomiting, gast-rectomy, or diseases that may impair oral absorption; and (4) when giving antimicrobials that are poorly absorbed following oral administration.

Various diseases and physiologic states alter the pharmacokinetics of antimicrobial agents. Impairment of renal or hepatic function may result in decreased elimination. Table 51–5 lists drugs that require dosage reduction in patients with renal or hepatic insuffi-ciency. Failure to reduce antimicrobial agent dosage in such patients may cause toxic effects. Conversely, patients with burns, cystic fibrosis, or trauma may have increased dosage requirements for selected agents. The pharmacokinetics of antimicrobials is also altered in the elderly, in neonates, and in pregnancy. 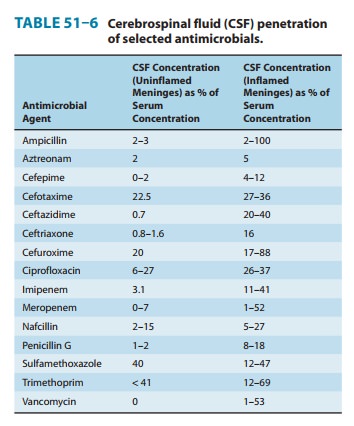