Antepartum haemorrhage is bleeding from genital tract in late pregnancy, after the 28 week of gestation till the end of second stage of labour.

Antepartum haemorrhage is bleeding from genital tract in late pregnancy, after the 28 week of gestation till the end of second stage of labour.

Effect on the fetus

Fetal mortality and morbidity are increased as a result of severe vaginal bleeding in pregnancy.

Still birth or perinatal or neonatal death may occurre Premature placental separation and consequent hypoxia may result in the birth of a child who is mentally and physically handiclapped.

Effect on the mother

If bleeding is severe, it may be accompanied by shock, disseminated interavascular coagulation and renal failure. The mother may die or be left with permanent ill- health.

Vaginal bleeding in late pregnancy is confined to placental separation due to placenta praevia or placental abruption.

The placenta is partially or wholly implanted in the lower uterine segment on either the anterior or posterior wall.

The lower uterine segment grows and stretches progressively often the 12th week of pregnancy. In late weeks this may cause the placenta to separate and sever bleeding can occur. Incidence- placenta pracvia occurs in 0.5% of all pregnancies.

·                 Vaginal delivery is possible particularly if the placenta is implanted anteriorly

o       Vaginal delivery is in appropriate.

o       Caesarean section is essential in order to save the life of the mother and fetus. 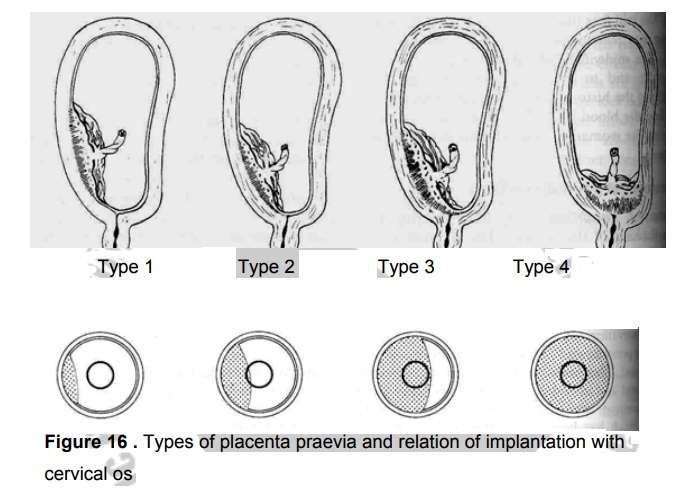 ·                 Using ultrasonic scanning will confirm the existence of placenta praevia and establish its degree.

If the haemorrhage is slight the mothers blood pressue, respiratory rate and pulse rate may be normal In severe hemorrhage;

The mother should be asked whether fetal activity has been normal.Excessive or cessation fetal movement is another indication of sever fetal hypoxia.

The managements of placenta praevia depends on:

Conservative management it is appropriate if bleeding isslight and mother and fetus are well.

·                 Ultrasound scans are repeated at intervals in order to observe the position of the placenta in relation to the cervical os.

If bleeding should occur or when the fetus is mature, an examination per vagina will be carried out under general anesthetic at operation room. If the placenta is felt, casearean section will be performed with out delay.

The nurse /midwife should be aware that even if vaginal delivery is achieved, there remains a danger of postpartum haemorrhage because the placenta has been situated in the lower segment.

Active management- sever vaginal bleeding will necessitateimmediate delivery by caesarean section. This should take place in a unit with facilities for special area of the new born especially if the baby will be preterm.

Oxytoocic drugs should be given as the baby is delivered. Occasionally uncontrolled haemorrhage may continue and a caesarean hysterectomy may be required.

Placental abruption is premature separation of a normally situated placenta occurring after the 28th week of pregnancy. The etiology of this type of haemorrhage is not always clear, but it is often associated with pregnancy induced hypertension or with a sudden reduction in uterine size. Rarely, direct trauma to the abdomen may partially dislodge the placenta. Placental abruption is an accidental occurrence of haemorrhage in 2% of all pregnancies. Partial separation of the placenta causes bleeding from the maternal venous sinuses in the placental bed. Further bleeding continues to separate the placenta to a greater or lesser degree.

The blood loss from a placenta abruption may be defined as revealed, concealed or mixed haemorrhage. An alternative classification, based on the degree of separation and therefore related to the condition of mother and baby is of mild, moderate and sever haemorrhage. Concealed haemorragec is

Revealed haemorrage-blood flow to the external and no blood is accumulated behind the placenta.

Assessment of the mother’s condition

There may be history of pregnancy induced hypertension, external cephalic version.If there is placental separation after the birth of a first twin or loss of copious amounts of amniotic fluid during rupture of aminiotic memberane.

If the blood loss is revealed;

More severe degrees are associated with abdominal pain The uterus has a hard consistency and there is a guarding on palpation of the abdomen.Fetal parts may not be palpable the fetal heart is unlikely to be heard with a fetal stethoscope.

·                 Any women with a history suggestive of placenta abruption needs urgent medical attention. She should be transferred urgently to a consultant obstetric unit after securing interavenous infusion.

·                 Any deterioration in the maternal or fetal condition must be immediately reported to the obstetrician.

If the mother is not in labour and the gestation is less than 37 weeks she may be cared for in an antenatal area for a few days and assessed for the risks.

Mothers who have passed the 37th week of pregnancy will have an amniotomy to induce labour. Further bleeding or evidence of fetal distress may indicate that a caesarean section is necessary.