Anesthesia for Patients with Kidney Failure

This syndrome is a rapid deterioration in renal function that results in retention of nitrogenous waste products (azotemia).

Anesthesia for Patients with Kidney Failure

This syndrome is a rapid deterioration in renal function that results in retention of nitrogenous waste products (azotemia). These substances, many of which behave as toxins, are byproducts of protein and amino acid metabolism. Impaired renal metab-olism of circulating proteins and peptides may con-tribute to widespread organ dysfunction.

Kidney failure can be classified as prerenal, renal, and postrenal, depending on its cause(s), and the initial therapeutic approach varies accordingly (see Figure 30–1 and Table 30–3). Prerenal kid-ney failure results from an acute decrease in renal 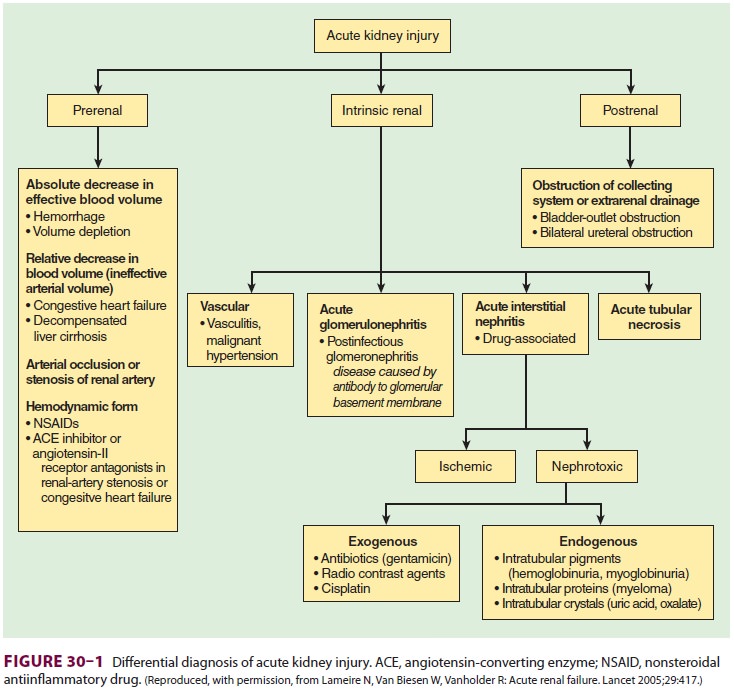 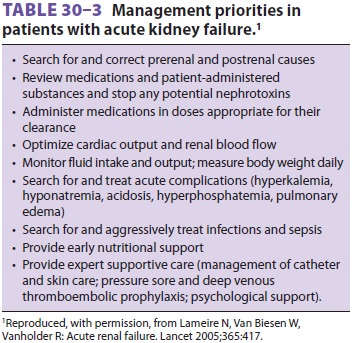 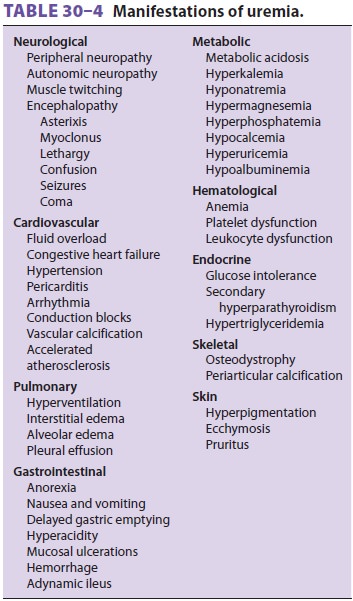 polycystic kidney disease. The uncorrected manifes-tations of this syndrome (Table 30–4)—collectively referred to as uremia—are usually seen only after the GFR decreases below 25 mL/min. Patients with GFR below 10 mL/min are dependent on renal replacement therapy (RRT) for survival. RRT may take the form of hemodialysis, hemofiltration, peri-toneal dialysis, or renal transplantation.The generalized effects of uremia can usually be controlled by RRT. The majority of patients who do not undergo renal transplantation receive hemodialy-sis three times per week, and there are complications directly related to hemodialysis itself (Table 30–5). Hypotension, neutropenia, hypoxemia, and the dis-equilibrium syndrome are generally transient and resolve within hours after hemodialysis. Factors 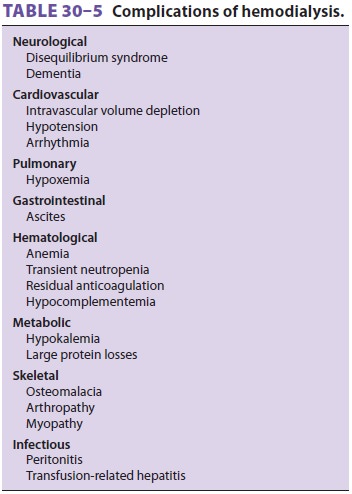 contributing to hypotension during dialysis include the vasodilating effects of acetate dialysate solutions, autonomic neuropathy, and rapid removal of fluid. The interaction of white cells with cellophane-derived dialysis membranes can result in neutropenia and leukocyte-mediated pulmonary dysfunction leadingto hypoxemia. Disequilibrium syndrome is character-ized by transient neurological symptoms that appear to be related to a more rapid lowering of extracellular osmolality than intracellular osmolality

Hyperkalemia is a potentially lethal conse-quence of kidney failure . It usu-ally occurs in patients with creatinine clearances of less than 5 mL/min, but it can also develop rapidly in patients with higher clearances in the setting of large potassium loads (eg, trauma, hemolysis, infec-tions, or potassium administration).

The hypermagnesemia is generally mild unless magnesium intake is increased (commonly from magnesium-containing antacids). Hypocalcemia is secondary to resistance to parathyroid hormone, decreased intestinal calcium absorption secondary to decreased renal synthesis of 1,25-dihydroxycholecal-ciferol, and hyperphosphatemia-associated calcium deposition into bone. Symptoms of hypocalcemia rarely develop unless patients are also alkalotic.

Anemia is nearly always present when the creatinine clearance is below 30 mL/min. Hemoglobin con-centrations are generally 6–8 g/dL due to decreased erythropoietin production, decreased red cell pro-duction, and decreased red cell survival. Additional factors may include gastrointestinal blood loss, hemodilution, and bone marrow suppression from recurrent infections. Even with transfusions, it is often difficult to maintain hemoglobin concentra-tions greater than 9 g/dL. Erythropoietin adminis-tration may partially correct the anemia. Increased levels of 2,3-diphosphoglycerate (2,3-DPG), which facilitates the unloading of oxygen from hemoglo-bin , develop in response to the decrease in blood oxygen-carrying capacity. The metabolic acidosis associated with ESRD also favors a rightward shift in the hemoglobin–oxygen disso-ciation curve. In the absence of symptomatic heart disease, most ESRD patients tolerate anemia well.

Both platelet and white cell function are impaired in patients with kidney failure. Clinically, this is manifested as a prolonged bleeding time and increased susceptibility to infections, respectively. Most patients have decreased platelet factor III activity as well as decreased platelet adhesiveness and aggregation. Patients who have recently under-gone hemodialysis may also have residual antico-agulant effects from heparin.

Extracellular fl uid overload from sodium retention, in association with increased cardiac demand imposed by anemia and hypertension, makes ESRD patients prone to congestive heart fail-ure and pulmonary edema. Increased permeability of the alveolar–capillary membrane may also be a predisposing factor for pulmonary edema associ-ated with ESRD . Arrhythmias, includ-ing conduction blocks, are common, and may be related to metabolic abnormalities and to deposi-tion of calcium in the conduction system. Uremic pericarditis may develop in some patients, who may be asymptomatic, may present with chest pain, or may present with cardiac tamponade. Patients with ESRD also characteristically develop accelerated peripheral vascular and coronary artery atheroscle-rotic disease.

Without RRT or bicarbonate therapy, ESRD patients may be dependent on increased minute ventila-tion as compensation for metabolic acidosis . Pulmonary extravascular water is often increased in the form of interstitial edema, result-ing in a widening of the alveolar to arterial oxygen gradient and predisposing to hypoxemia. Increased permeability of the alveolar–capillary membrane in some patients can result in pulmonary edema even with normal pulmonary capillary pressures.

Abnormal glucose tolerance is common in ESRD, usually resulting from peripheral insulin resistance (indeed, type 2 diabetes mellitus is one of the most common causes of ESRD). Secondary hyperpara-thyroidism in patients with chronic kidney failure can produce metabolic bone disease, with osteope-nia predisposing to fractures. Abnormalities in lipid metabolism frequently lead to hypertriglyceride-mia and contribute to accelerated atherosclerosis. Increased circulating levels of proteins and polypep-tides normally degraded by the kidneys are often present, including parathyroid hormone, insulin, glucagon, growth hormone, luteinizing hormone, and prolactin.

Anorexia, nausea, vomiting, and adynamic ileus are commonly associated with uremia. Hypersecretion of gastric acid increases the incidence of peptic ulceration and gastrointestinal hemorrhage, whichoccurs in 10–30% of patients. Delayed gastric emptying secondary to autonomic neuropathymay predispose patients to perioperative aspiration. Patients with chronic kidney failure also have an increased incidence of hepatitis B and C, often with associated hepatic dysfunction.

Asterixis, lethargy, confusion, seizures, and coma are manifestations of uremic encephalopathy, and symptoms usually correlate with the degree of azo-temia. Autonomic and peripheral neuropathies are common in patients with ESRD. Peripheral neu-ropathies are typically sensory and involve the distal lower extremities.

often used when patients are too hemodynami-cally unstable to tolerate intermittent hemodialysis. Indications for dialysis are listed in Table 30–6.

Patients with chronic kidney failure commonly present to the operating room for creation or revi-sion of an arteriovenous dialysis fistula under local or regional anesthesia. However, regardless of the intended procedure or the anesthetic employed, one must be certain that the patient is in optimal medi-cal condition; potentially reversible manifestations of uremia (see Table 30–4) should be addressed. Preoperative dialysis on the day of surgery or on the previous day is typical.

The history and physical examination should address both cardiac and respiratory function. Signs of fluid overload or hypovolemia should be sought. Patients are often relatively hypovolemic immedi-ately following dialysis. A comparison of the patient’s current weight with previous predialysis and postdi-alysis weights may be helpful. Hemodynamic data and a chest radiograph, if available, are useful in con-firming clinical impressions. Arterial blood gas anal-ysis is useful in evaluating oxygenation, ventilation, hemoglobin level, and acid–base status in patients with dyspnea or tachypnea. The electrocardiogram should be examined for signs of hyperkalemia or hypocalcemia  as well as ischemia, conduction block, and ventricular hypertrophy. Echocardiography can assess cardiac function, ven-tricular hypertrophy, wall motion abnormalities, and pericardial fluid. A friction rub may not be audible on auscultation of patients with a pericardial effusion.

Preoperative red blood cell transfusions are usu-ally administered only for severe anemia as guided by the patient’s clinical needs. A bleeding time and coagulation studies may be advisable, particularly if neuraxial anesthesia is being considered. Serum 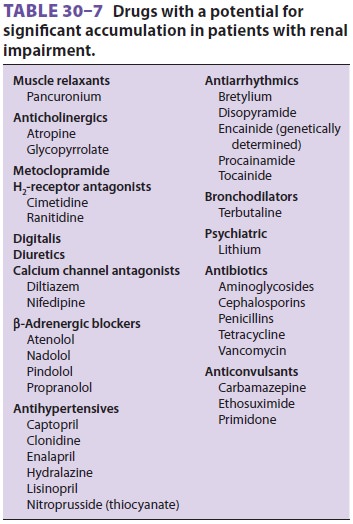 Drugs with significant renal elimination should be avoided if possible (Table 30–7). Dosage adjust-ments and measurements of blood levels (when available) are necessary to minimize the risk of drug toxicity.

Alert patients who are stable can be given reduced doses of a benzodiazepine or an opioid, if needed. Aspiration prophylaxis with an H2 blocker or proton pump inhibitor may be indicated in patients with nausea, vomiting, or gastrointesti-nal bleeding. Metoclopramide, 10 mg orally or slowly intravenously, may be useful in accelerat-ing gastric emptying and decreasing the risk of aspiration. Preoperative medications—particularly antihypertensive agents—should be continued until the time of surgery .

Patients with renal insufficiency and kidney fail-ure are at increased risk of perioperative complica-tions, and their general medical condition and the planned operative procedure dictate monitoring requirements. Because of the risk of thrombosis, blood pressure should not be measured by a cuff on an arm with an arteriovenous fistula. Continuous intraarterial blood pressure monitoring may also be indicated in patients with poorly controlled hyper-tension, regardless of the procedure.

Patients with nausea, vomiting, or gastrointestinal bleeding should undergo rapid-sequence induc-tion. The dose of the induction agent should be reduced for debilitated or critically ill patients, or for patients who have recently undergone hemodi-alysis (because of relative hypovolemia immediately following hemodialysis). Propofol, 1–2 mg/kg, or etomidate, 0.2–0.4 mg/kg, is often used. An opioid, β blocker (esmolol), or lidocaine may be used to blunt the hypertensive response to airway instrumenta-tion and intubation. Succinylcholine, 1.5 mg/kg, can be used to facilitate endotracheal intubation in the absence of hyperkalemia. Vecuronium (0.1 mg/kg) or cisatracurium (0.15 mg/kg), or propofol–lidocaine induction without a relaxant, may be considered for intubation in patients with hyperkalemia.

The ideal anesthetic maintenance technique should control hypertension with minimal deleterious effect on cardiac output, because increased cardiac output is the principal compensatory mechanism for tissue oxygen delivery in anemia. Volatile anesthetics, pro-pofol, fentanyl, sufentanil, alfentanil, and remifent-anil are satisfactory maintenance agents. Nitrous oxide should be used cautiously in patients with poor ventricular function and should probably not be used for patients with very low hemoglobin con-centrations (<7 g/dL) to allow the administration of 100% oxygen (see above). Meperidine is not an ideal choice because of the accumulation of its metabolite normeperidine. Morphine may be used, but some prolongation of its effects should be expected.

Controlled ventilation should be considered for patients with kidney failure. Inadequatespontaneous ventilation with progressive hypercar-bia under anesthesia can result in respiratory acido-sis that may exacerbate preexisting acidemia, lead to potentially severe circulatory depression, and dangerously increase serum potassium concentra-tion . On the other hand, respira-tory alkalosis may also be detrimental because it shifts the hemoglobin dissociation curve to the left, can exacerbate preexisting hypocalcemia, and may reduce cerebral blood flow.

Superficial operations involving minimal tis-sue trauma require replacement of only insensible fluid losses. Procedures associated with major fluid losses require isotonic crystalloids, colloids, or both . Lactated Ringer’s injection is best avoided in hyperkalemic patients when large volumes of fluid may be required, because it contains potas-sium (4 mEq/L); normal saline may be used instead. Glucose-free solutions should generally be used because of the glucose intolerance associated with uremia. Blood that is lost should generally be replaced with colloid or packed red blood cells as clinically indicated. Allogeneic blood transfusion may decrease the likelihood of rejection following renal transplan-tation because of associated immunosuppression.