Acute hepatitis is usually the result of a viral infection, drug reaction, or exposure to a hepatotoxin.

Acute hepatitis is usually the result of a viral infec-tion, drug reaction, or exposure to a hepatotoxin. The illness represents acute hepatocellular injury with a variable degree of cellular necrosis. Clinical manifestations depend both on the severity of the inflammatory reaction, and, more importantly, on the degree of necrosis. Mild inflammatory reactions may present merely as asymptomatic elevations in the serum transaminases, whereas massive hepatic necrosis presents as acute fulminant hepatic failure.

Viral hepatitis is most commonly due to hepa-titis A, hepatitis B, or hepatitis C viral infection. At least two other hepatitis viruses have also been identified: hepatitis D (delta virus) and hepa-titis E (enteric non-A, non-B). Hepatitis types and E are transmitted by the fecal-oral route, whereas hepatitis types B and C are transmitted primarily percutaneously and by contact with body fluids. Hepatitis D is unique in that it may be transmitted by either route and requires the pres-ence of hepatitis B virus in the host to be infective. Other viruses may also cause hepatitis, including Epstein–Barr, herpes simplex, cytomegalovirus, and coxsackieviruses.

Patients with viral hepatitis often have a 1- to 2-week mild prodromal illness (fatigue, malaise, low-grade fever, or nausea and vomiting) that may or may not be followed by jaundice. The jaundice typically lasts 2–12 weeks, but complete recovery, as evidenced by serum transaminase measurements, usually takes 4 months. Because clinical manifes-tations overlap, serological testing is necessary to determine the causative viral agent. The clinical course tends to be more complicated and prolonged with hepatitis B and C viruses relative to other types of viral hepatitis. Cholestasis  may be a major manifestation. Rarely, fulminant hepatic fail-ure (massive hepatic necrosis) can develop.

Drug-induced hepatitis (Table 33–2) can result from direct, dose-dependent toxicity of a drug or drug metabolite, an idiosyncratic drug reaction, or a combination of these two causes. The clinical course often resembles viral hepatitis, making diagnosis difficult. Alcoholic hepatitis is probably the most common form of drug-induced hepatitis, but the etiology may not be obvious from the history. Chronic alcohol ingestion can also result in hepato-megaly from fatty infiltration of the liver, which reflects impaired fatty acid oxidation, increased uptake and esterification of fatty acids, and diminished lipoprotein synthesis and secretion. Acetaminophen ingestion of 25 g or more usually results in fatal fulminant hepatotoxicity. A few drugs, such as chlorpromazine and oral contracep-tives, may cause cholestatic-type reactions . Ingestion of potent hepatotoxins, such as carbon tetrachloride and certain species of 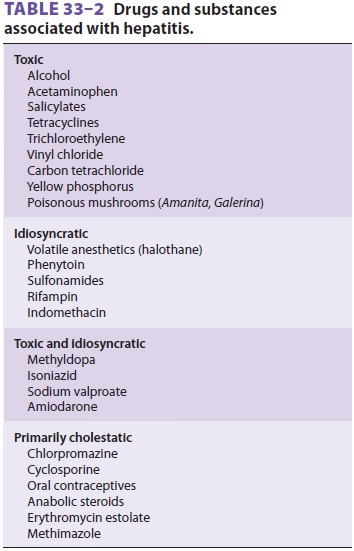 Because of the increased risk of perioperative morbidity and mortality, patients with acute hepatitis should have elective surgery postponed until the illness has resolved, as indicated by the nor-malization of liver tests. In addition, acute alcohol toxicity greatly complicates anesthetic management, and acute alcohol withdrawal during the periopera-tive period may be associated with a mortality rate as high as 50%. Only emergent surgery should be considered for patients presenting in acute alcohol withdrawal. Patients with hepatitis are at risk of deterioration of hepatic function and the develop-ment of complications from hepatic failure, such as encephalopathy, coagulopathy, or hepatorenal syndrome.

Laboratory evaluation of the patient with hep-atitis should include blood urea nitrogen, serum electrolytes, creatinine, glucose, transaminases, bili-rubin, alkaline phosphatase, and albumin, platelet count, and PT. Serum should also be checked for HBsAg whenever possible. A blood alcohol level is useful if the history or physical examination is compatible with ethanol intoxication. Hypokalemia and metabolic alkalosis are not uncommon and are usually due to vomiting. Concomitant hypo-magnesemia may be present in chronic alcoholics and predisposes to cardiac arrhythmias. The eleva-tion in serum transaminases does not necessarily correlate with the amount of hepatic necrosis. The serum alanine aminotransferase (ALT) is generally higher than the serum aspartate aminotransfer-ase (AST), except in alcoholic hepatitis, where the reverse occurs. Bilirubin and alkaline phosphatase are usually only moderately elevated, except with the cholestatic variant of hepatitis. The PT is the best indicator of hepatic synthetic function. Persistent prolongation of longer than 3 sec (INR > 1.5) fol-lowing administration of vitamin K is indicative of severe hepatic dysfunction. Hypoglycemia is not uncommon. Hypoalbuminemia is usually not pres-ent except in protracted cases, with severe malnutri-tion, or when chronic liver disease is present.

If a patient with acute hepatitis must undergo an emergent operation, the preanesthetic evalua-tion should focus on determining the cause and the degree of hepatic impairment. Information should be obtained regarding recent drug exposures, including alcohol intake, intravenous drug use, recent transfusions, and prior anesthetics. The pres-ence of nausea or vomiting should be noted, and, if present, dehydration and electrolyte abnormalities should be anticipated and corrected. Changes in mental status may indicate severe hepatic impair-ment. Inappropriate behavior or obtundation in alcoholic patients may be signs of acute intoxica-tion, whereas tremulousness and irritability usually reflect withdrawal. Hypertension and tachycardia are often also prominent with the latter. Fresh fro-zen plasma may be necessary to correct a coagu-lopathy. Premedication is generally not given, in an effort to minimize drug exposure and not confound hepatic encephalopathy in patients with advanced liver disease. However, benzodiazepines and thia-mine are indicated in alcoholic patients with, or at risk for, acute withdrawal.

The goal of intraoperative management is to preserve existing hepatic function and avoid factors that may be detrimental to the liver. Drug selection and dos-age should be individualized. Some patients with viral hepatitis may exhibit increased central ner-vous system sensitivity to anesthetics, whereas alco-holic patients will often display cross-tolerance to both intravenous and volatile anesthetics. Alcoholic patients also require close cardiovascular monitoring, because the cardiac depressant effects of alcohol are additive to those of anesthetics; moreover, alcoholic cardiomyopathy is present in many alcoholic patients.

Inhalation anesthetics are generally preferable to intravenous agents because most of the latter are dependent on the liver for metabolism or elimina-tion. Standard induction doses of intravenous induction agents can generally be used because their action is terminated by redistribution rather than metabolism or excretion. A prolonged duration of action, however, may be encountered with large or repeated doses of intravenous agents, particularlyopioids. Isoflurane and sevoflurane are the volatile agents of choice because they preservehepatic blood flow and oxygen delivery. Factors known to reduce hepatic blood flow, such as hypo-tension, excessive sympathetic activation, and high mean airway pressures during controlled ventila-tion, should be avoided. Regional anesthesia, includ-ing major conduction blockade, may be employed in the absence of coagulopathy, provided hypotension is avoided.