Analysis of Noise In Communication Systems

ANALYSIS OF NOISE IN COMMUNICATION SYSTEMS:

B = bandwidth noise measured in (Hz)

This is found to hold for large bandwidth (>1013 Hz) and large range in temperature. This thermal noise may be represented by an equivalent circuit as shown below. 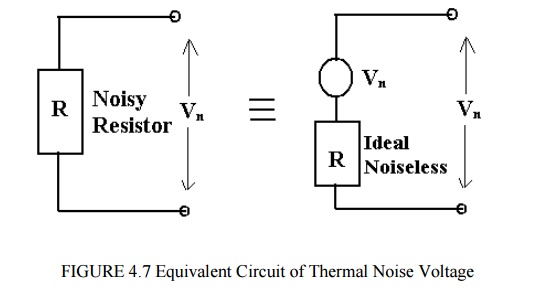 i.e. equivalent to the ideal noise free resistor (with same resistance R) in series with a voltage source with voltage Vn.

The above equation indicates that the noise power is proportional to bandwidth. For a given resistance R, at a fixed temperature T (Kelvin) 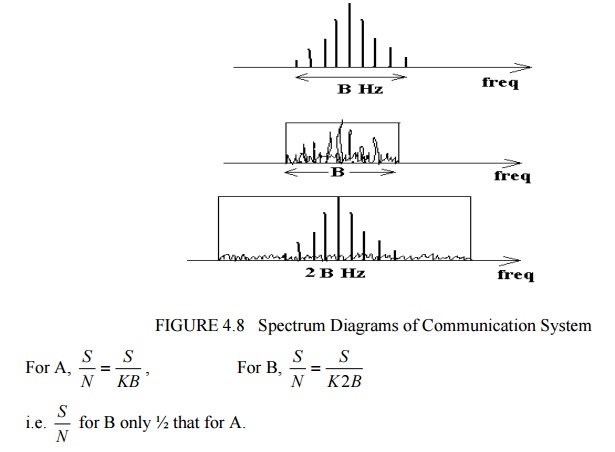 i.e. The resistor in series at same temperature behave as a single resistor  (R1 + R2) 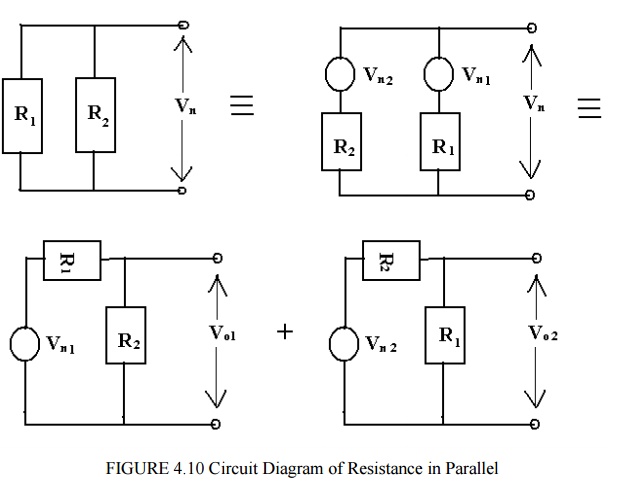 Since an ideal voltage source has zero impedance, we can find noise as an output Vo1, due to Vn1 , an output voltage V02 due to Vn2. 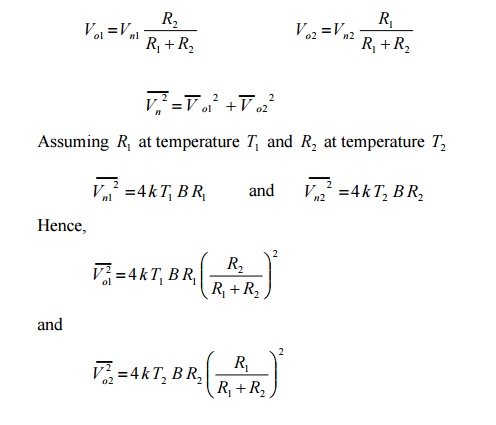 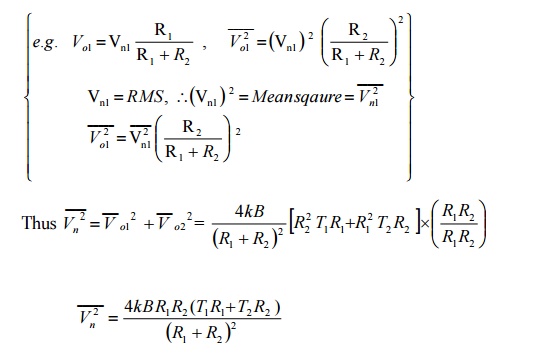 In communication systems we are usually concerned with the noise (i.e. S/N) at the receiver end of the system.

The transmission path may be for example:-

Zo is the characteristics impedance of the transmission line, i.e. the source resistance Rs. This is connected to the receiver with an input impedance RIN .

An equivalent circuit, when the line is connected to the receiver is shown below. (Note we omit the noise due to Rin – this is considered in the analysis of the receiver section). 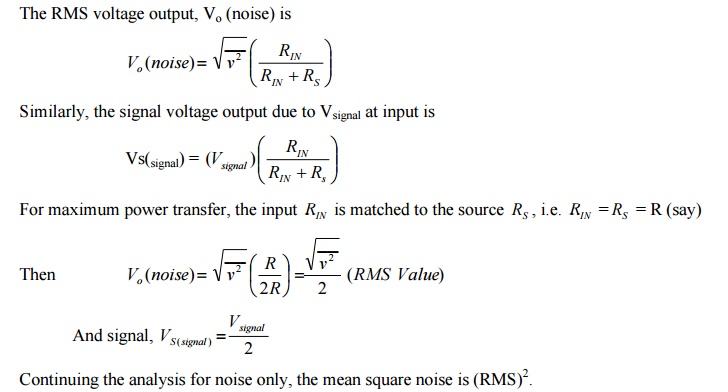 For a matched system, N represents the average noise power transferred from the source to the load. This may be written as

where  p0  is the noise power spectral density (watts per Hz)

T is the absolute temperature K.

Note: that p0  is independent of frequency, i.e. white noise.

These equations indicate the need to keep the system bandwidth to a minimum, i.e. to that required to pass only the band of wanted signals, in order to minimize noise power, N.

In the above example, the noise measured is band limited by the test equipment rather than the system, making the system appears less noisy than it actually is. Clearly if the relative bandwidths are known (they should be) the measured noise power may be corrected to give the actual noise power in the system bandwidth.

If the system bandwidth was 250 KHz and the test equipment was 1 MHz then the measured result now would be – 150 dBW (i.e. the same as the actual noise) because the noise power monitored by the test equipment has already been band limited to 250 KHz. 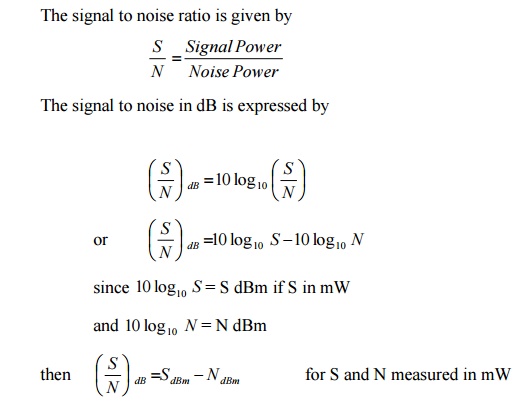 F equals to 1 for noiseless network and in general F > 1. The noise figure in the noise factor quoted in dB

The noise figure / factor is the measure of how much a network degrades the (S/N)IN, the lower the value of F, the better the network.

For active elements with power gain G>1, we have 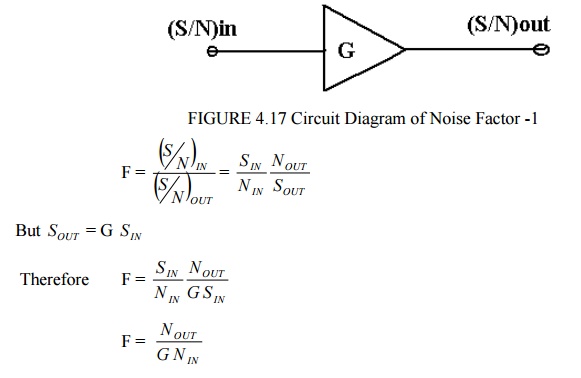 Na represents ‘added‘ noise measured at the output. This added noise may be referred to the input as extra noise, i.e. as equivalent diagram is

Ne is extra noise due to active elements referred to the input; the element is thus effectively noiseless.

This allows us to calculate the equivalent noise temperature of an element with noise factor F, measured at 290 K.

For example, if we have an amplifier with noise figure FdB = 6 dB (Noise factor F=4) and equivalent Noise temperature Te = 865 K.

a)     We have introduced the idea of referring the noise to the input of an element, this noise is not actually present at the input, it is done for convenience in the analysis.

c)     Noise figure (or noise factor F) and equivalent noise temperature Te are related and both indicate how much noise an element is producing.

The theoretical argument for passive networks (e.g. feeders, passive mixers, attenuators) that is networks with a gain < 1 is fairly abstract, and in essence shows that the noise at the input, N IN is attenuated by network, but the added noise Na contributes to the noise at the output such that 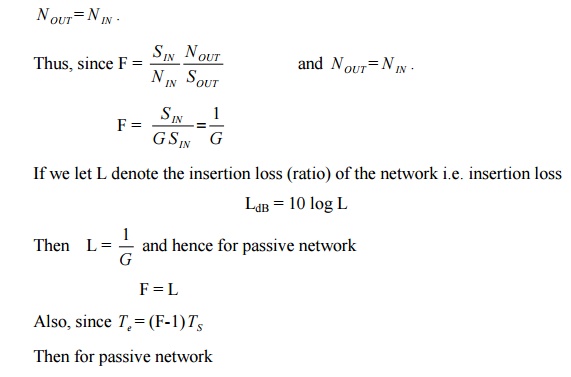 Typical values of noise temperature, noise figure and gain for various amplifiers and attenuators are given below:

A receiver systems usually consists of a number of passive or active elements connected in series, each element is defined separately in terms of the gain (greater than 1 or less than 1 as the case may be), noise figure or noise temperature and bandwidth (usually the 3 dB bandwidth). These elements are assumed to be matched.

A typical receiver block diagram is shown below, with example

In order to determine the (S/N) at the input, the overall receiver noise figure or noise temperature must be determined. In order to do this all the noise must be referred to the same point in the receiver, for example to A, the feeder input or B, the input to the first amplifier.

The equations so far discussed refer the noise to the input of that specific element i.e.

Te  or N e is the noise referred to the input.

To refer the noise to the output we must multiply the input noise by the gain G. For example, for a lossy feeder, loss L, we had

Similarly, the equivalent noise temperature referred to the output is

These points will be clarified later; first the system noise figure will be considered.

Assume that a system comprises the elements shown below, each element defined and specified separately.

The gains may be greater or less than 1, symbols F denote noise factor (not noise figure, i.e. not in dB). Assume that these are now cascaded and connected to an aerial at the input, with 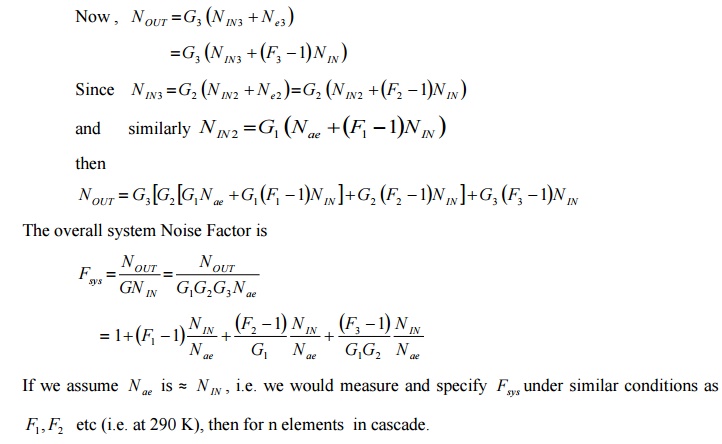 The equation is called FRIIS Formula. 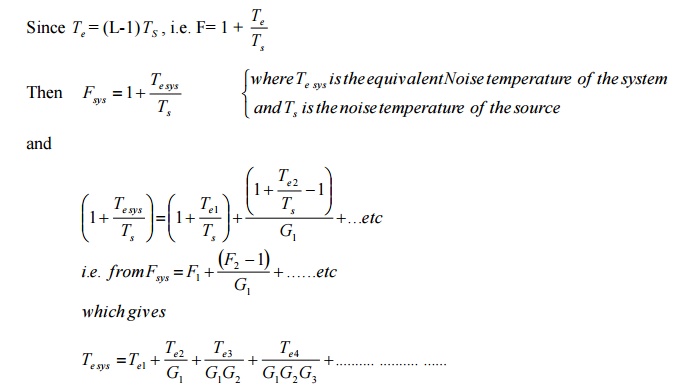 It is important to realize that the previous sections present a technique to enable a receiver performance to be calculated. The essence of the approach is to refer all the noise contributed at various stages in the receiver to the input and thus contrive to make all the stages ideal, noise free. i.e. in practice or reality : -

The noise gets worse as we proceed from the aerial to the output. The technique outlined.

All noise referred to input and all stages assumed noise free.

To complete the analysis consider the system below 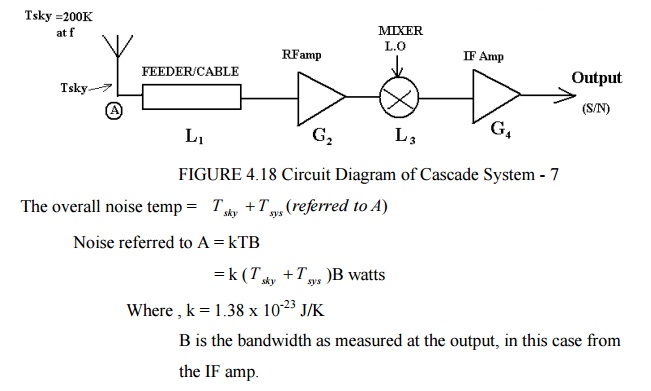 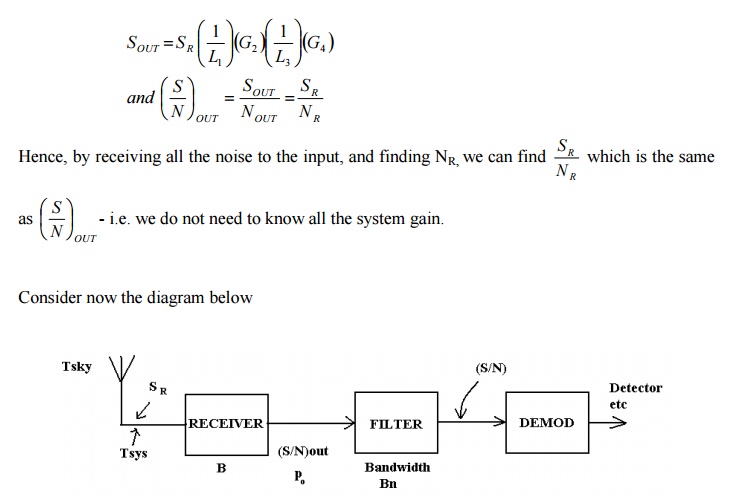 A filter in same form often follows the receiver and we often need to know po , the noise power spectral density.

We may find  po  from

In order for the effects of noise to be considered in systems, for example the analysis of probability of error as a function of Signal to noise for an FSK modulated data systems, or the performance of analogue FM system in the presence of noise, it is necessary to develop a model which will allow noise to be considered algebraically.

In practice noise is a random signal with (in theory) a Gaussian distribution and hence peak values up to ± ¥ or as otherwise limited by the system dynamic range are possible. Hence this ―peak‖ value for noise is a fictitious value which will give rise to the same average noise as the actual noise.

·        PHASOR REPRESENTATION OF SIGNAL AND NOISE:

The phasor represents a signal with peak value Vc, rotating with angular frequencies Wc rads per sec and with an angle q = wc t to some reference axis at time t=0.

If we now consider a carrier with a noise voltage with ―peak‖ value superimposed we may represents this as:

In this case Vn is the peak value of the noise and is the phase of the noise relative to the carrier. Both Vn and q n are random variables, the above phasor diagram represents a snapshot at some instant in time.

The resultant or received signal R, is the sum of carrier plus noise. If we consider several snapshots overlaid as shown below we can see the effects of noise accompanying the signal and how this affects the received signal R.

Thus the received signal has amplitude and frequency changes (which in practice occur randomly) due to noise.We may draw, for a single instant, the phasor with noise resolved into 2 components, which are:

a)  x(t) in phase with the carriers

b)  y(t) in quadrature with the carrier

We note that the resultant from x(t) and y(t) i.e.

Hence we may write

This equation is algebraic representation of noise and since 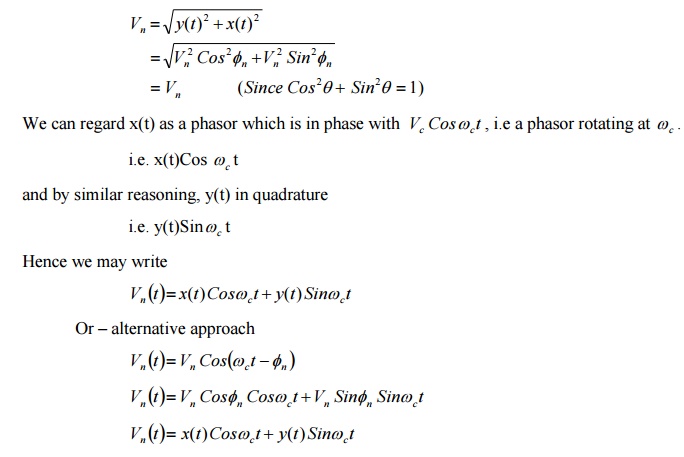 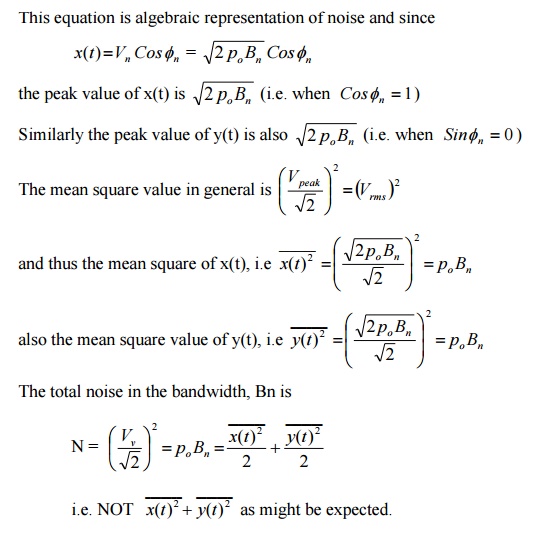 The reason for this is due to the Cosfn and Sinfn relationship in the representation e.g. when say ―x(t)‖ contributes   po Bn , the ―y(t)‖ contribution is zero, i.e. sum is always equal to  po Bn .

The algebraic representation of noise discussed above is quite adequate for the analysis of many systems, particularly the performance of ASK, FSK and PSK modulated systems.

When considering AM and FM systems, assuming a large (S/N) ratio, i.e Vc>> Vn, the following may be used.

Considering the general phasor representation below:-

For AM systems, the signal is of the form (Vc + m(t))Coswc t where m(t) is the message or modulating signal and the resultant for (S/N) >> 1 is

Since AM is sensitive to amplitude changes, changes in the Resultant length are predominantly due to x(t).

For FM systems the signal is of the form Vc Cos(wc ± Dw)t . Noise will produce both amplitude changes (i.e. in Vc) and frequency variations – the amplitude variations are removed by a limiter in the FM receiver. Hence,

The angle q represents frequency / phase variations in the received signal due to noise. From the diagram. 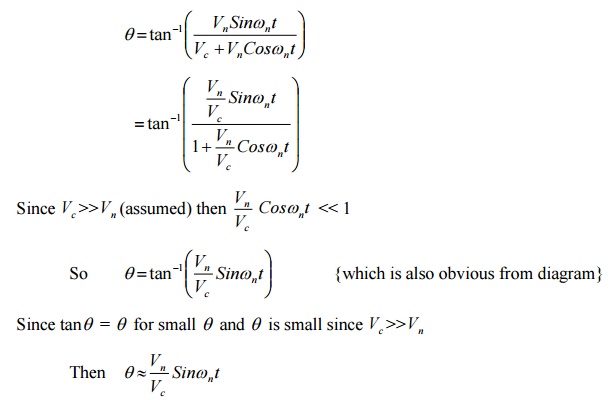 The above discussion for AM and FM serve to show bow the ‘model‘ may be used to describe the effects of noise.Applications of this model to ASK, FSK and PSK demodulation, and AM and FM demodulation are discussed elsewhere.

Noise is usually additive in that it adds to the information bearing signal. A model of the received signal with additive noise is shown below.

The signal (information bearing) is at its weakest (most vulnerable) at the receiver input. Noise at the other points (e.g. Receiver) can also be referred to the input.The noise is uncorrelated with the signal, i.e. independent of the signal and we may state, for average powers

As we have stated noise is assumed to have a uniform noise power spectral density, given that the noise is not band limited by some filter bandwidth.

We generally assume that noise voltage amplitudes have a Gaussian or Normal distribution.