A multiple produces an output V0 which is proportional to the product of two inputs Vx and Vy. V0 = KVxVy where K is the scaling factor = (1/10) V-1.

There are various methods available for performing analog multiplication. Four of such techniques, namely,

An actual multiplier has its output voltage V0 defined by

This specifies the derivation of the actual output from the ideal output, for any combination of X and Y inputs falling within the permissible operating range of the multiplier.

This defines the accuracy of the multiplier. The Linearity Error can be defined as the maximum absolute derivation of the error surface. This linearity error imposes a lower limit on the multiplier accuracy. 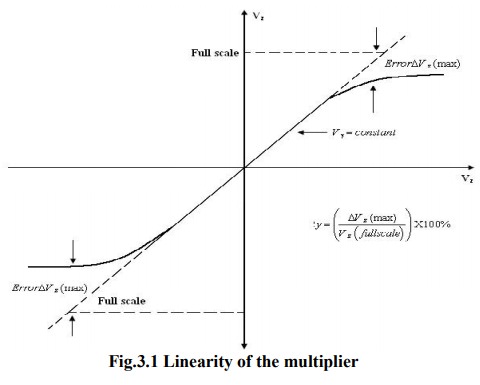 The figure shows the response of the output as a function of one input voltage Vx when the other Vy is assumed constant. It represents the maximum percentage derivation from the ideal straight line output. An error surface is formed by plotting the output for different combinations of X and Y inputs.

The Square – law curve is obtained with the X and Y inputs connected together and applied with the same input signal. The maximum derivation of the output voltage from an ideal square –law curve expresses the squaring mode accuracy. 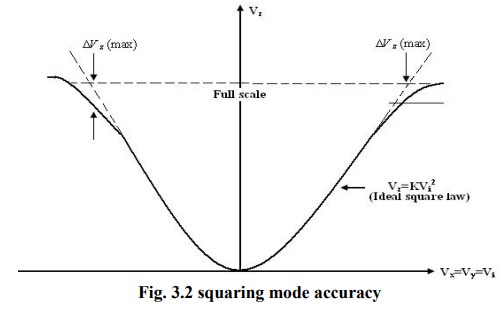 The Bandwidth indicates the operating capability of an analog multiplier at higher frequency values. Small signal 3 dB bandwidth defines the frequency f0 at which the output reduces by 3dB from its low frequency value for a constant input voltage. This is identified individually for the X and Y input channels normally.

As shown in figure the input voltages Vx and Vy are converted to their logarithmic equivalent, which are then added together by a summer. An antilogarithmic converter produces the output      voltage of the summer. The output is given by, 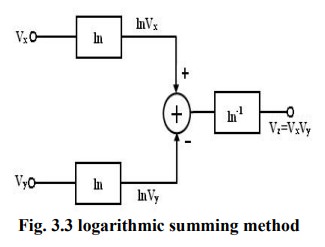 The relationship between I0 and VBE of the transistor is given by IC = I0e(VBE /VT ) .It is found that the transistor follows the relationship very accurately in the range of 10nA to 100mA. Logarithmic multiplier has low accuracy and high temperature instability. This method is applicable only to positive values of Vx and Vy.

Limitation: this type of multiplier is restricted to one quadrant operation only. 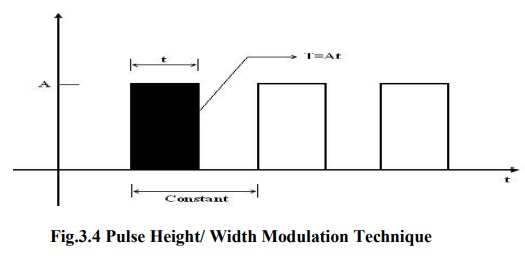