Analog multiplier is a circuit whose output voltage at any instant is proportional to the product of instantaneous value of two individual input voltages.

Analog multiplier is a circuit whose output voltage at any instant is proportional to the product of instantaneous value of two individual input voltages.

Important applications of these multipliers are multiplication, division, squaring and square – rooting of signals, modulation and demodulation.

These analog multipliers are available as integrated circuits consisting of op-amps and other circuit elements. The Schematic of a typical analog multiplier, namely, AD633 is shown in figure. 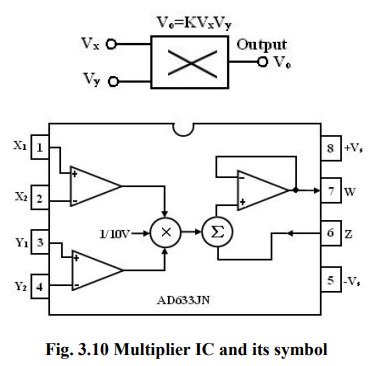 ·           It possesses high input impedance; this characteristic makes the loading effect on the signal source negligible.

Schematic representation of a multiplier:

The schematic representation of an analog multiplier is shown in figure. The output V0 is the product of the two inputs Vx and Vy is divided by a reference voltage Vref. Normally, the reference voltage Vref is internally set to 10V. Therefore, V0 =VxVy/10. In other words, the basic input – output relationship can be defined by KVx Vy when K = 1/10, a constant. Thus for peak input voltages of 10V, the peak magnitude of output voltage is 1/10 *10 *10 =10V. Thus, it can be noted that, as long as Vx < 10V and Vy < 10V, the multiplier output will not saturate.

The multiplier ICs are used for the following purposes: 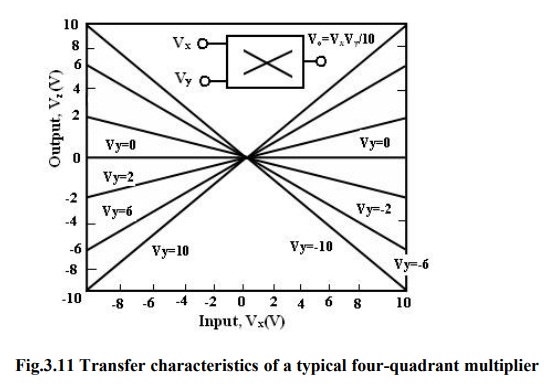 Figure shows the multiplier IC connected as a squaring circuit. The inputs can be positive or negative, represented by any corresponding voltage level between 0 and 10V. The input voltage Vi to be squared is simply connected to both the input terminals, and hence we have, Vx = Vy = Vi and the output is V0 = KVi2. The circuit thus performs the squaring operation. This application can be extended for frequency doubling applications.

Figure shows the squaring circuit connected for frequency doubling operation. A sine-wave signal Vi has a peak amplitude of Av and frequency of f Hz. Then, the output voltage of the doublers  circuit is given by

Assuming a peak amplitude Av of 5V and frequency f of 10KHz, V0 =1.25–1.25 cos2 20000) t. The first term represents the dc term of 1.25V peak amplitude. The input and output waveforms are shown in figure. The output waveforms ripple with twice the input frequency in the rectified output of the input signal. This forms the principle of application of analog multiplier as rectifier of ac signals. 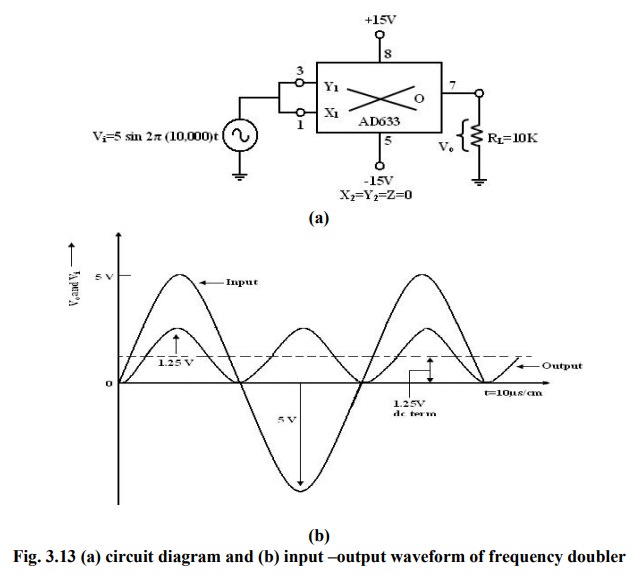 The dc component of output V0 can be removed by connecting a 1µF coupling capacitor between the output terminal and a load resistor, across which the output can be observed.

In voltage divider circuit the division is achieved by connecting the multiplier in the feedback loop of an op-amp.

The voltages Vden and Vnum represent the two input voltages, Vdm forms one input of the multiplier, and output of op-amp VoA forms the second input. 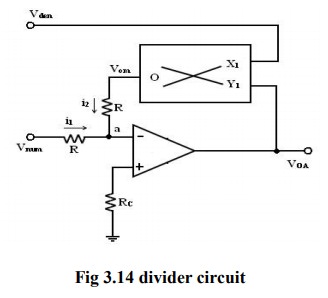 As shown in figure, no input signal current can flow into the inverting input terminal of op-amp, which is at virtual ground. Therefore, at the junction a, i1 + i2 =0, the current i1 = Vnum / R, where R is the input resistance and the current i2 = Vom /R. With virtual ground existing at a,

where Vnum and Vden are the numerator and denominator voltages respectively. Therefore, the voltage division operation is achieved. Vnum can be a positive or negative voltage and Vden can have only positive values to ensure negative feedback. When Vdm is changed, the gain 10/Vdm changes, and this feature is used in automatic gain control (AGC) circuits.

The divider voltage can be used to find the square root of a signal by connecting both inputs of the multiplier to the output of the op-amp. Substituting equal in magnitude but opposite in polarity (with respect to ground) to Vi. But we know that Vom is one- term (Scale factor) of V0 * V0 or -Vi = Vom = V2/1 0

Eqn. states that V0  equals the square root of 10 times the absolute magnitude of Vi.

The input voltage Vi must be negative, or else, the op-amp saturates.

The range of Vi is between -1 and -10V. Voltages less than -1V will cause inaccuracies in the result.

The diode prevents negative saturation for positive polarity Vi signals. For positive values of Vi the diode connections are reversed.

The multiplier configured for phase angle detection measurement is shown in figure. When two sine-waves of the same frequency are applied to the inputs of the multiplier, the output V0 has a dc component and an AC component.

When the two frequencies are equal, but with different phase angles, e.g. A=2πft +θ for signal Vx and B= 2πft for signal Vy, then using the identity

Therefore, when the two input signals Vx and Vy are applied to the multiplier, V0 (dc) is given by

where Vxp and Vyp are the peak voltage amplitudes of the signals Vx and Vy. Thus, the output V0(dc) depends on the factor cos θ. A dc voltmeter can be calibrated as a phase angle meter when the product of Vxp and Vyp is made equal to 20. Then, a (0-1) V range dc voltmeter can directly read cos θ, with the meter calibrated directly in degrees from a cosine table. The input and output waveforms are shown in figure. 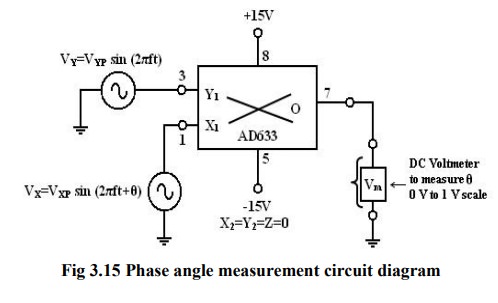 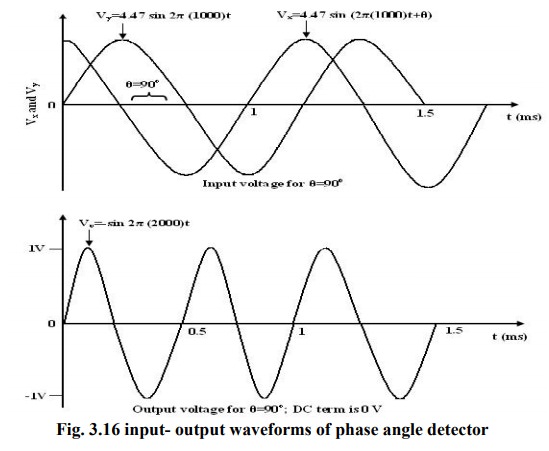