The eye, one of the initial exposure inter-faces for allergens, is a common site for allergic disorders.

The eye, one of the initial exposure inter-faces for allergens, is a common site for allergic disorders. Symptoms can range from mild eye itching to chronic cataracts and blindness. These disorders are differ-entiated by their clinical presentation as well as by the nature of the immunologi-cal changes occurring in the conjunctival surface. Ocular allergic inflammation is typically associated with IgE-mediated mast cell activation. Mast cell–derived mediators (e.g., histamine, proteases, leu-kotrienes, and cytokines) initiate a cascade of events that culminate in the infiltration and migration of inflammatory leukocytes (neutrophils, eosinophils, and lympho-cytes) to the ocular tissue. This trafficking of inflammatory cells requires attraction of these cells initiated by chemokines, and directed migration of the inflammatory cells out of the bloodstream to the surface epithelium using adhesion molecules and their receptors. These immunological reac-tions lead to the common allergic ocular diseases described next.

Seasonal allergic conjunctivitis is the most common form of allergic ocu-lar disease. Changes in the conjunctiva include a visible increase in the type and number of cells provoking allergy symp-toms, usually in spring and in fall.

The aforementioned cell types, such as mast cells and eosinophils, interact and release a variety of allergic mediators when exposed to seasonal aeroallergens such as tree or grass pollen. Preformed mediators are released in an immediate phase, and newly formed mediators appear approxi-mately eight to twenty-four hours after exposure. These mediators have overlap-ping biological functions that contribute to the typical ocular itching, redness, and watery discharge associated with allergic eye disease. Inflammatory markers include up-regulation of intercellular adhesion molecules such as ICAM-1. Increased levels of helper T cell 2 subset (TH2) cytokines, including IL-4, are found in the eye tissues during allergy season. Clinically, the con-junctiva is red, with a clear discharge. The eye is almost uniformly pruritic. Seasonal allergic conjunctivitis is commonly asso-ciated with rhinitis, but it may be the predominant symptom of allergy.

Perennial allergic conjunctivitis, in contrast, is associated with a persistent increase in the number of these allergic cell types throughout the year as well as spe-cific IgE (dust, mold, animal dander) found in the tears of affected individuals.

Vernal conjunctivitis is a chronic, bilat-eral conjunctival inflammatory disease found primarily in young males with history of atopy during spring months. Initial symptom onset is before puberty, and symptoms dissipate by the third decade of life. In severe cases, vernal con-junctivitis can lead to corneal scarring and permanent vision loss. Histopatho-logically, conjunctival infiltration with basophils, eosinophils, plasma cells, lym-phocytes, and macrophages characterizes vernal conjunctivitis. With this cellular milieu, it appears that vernal conjunctivi-tis is a combined immediate- and delayed-type hypersensitivity reaction.

Giant papillary conjunctivitis is a chronic inflammatory process that leads to the production of giant mucosal ducts, or papillae, on the conjunctival lining of the upper eyelids. The immunopathologic mechanism is complex and is theorized to be a mechanical trauma culminating in a mast cell–mediated delayed-type hyper-sensitivity.

The major signs and symptoms include itching and a clear or white stringy dis-charge. A “cobblestone” appearance is typical. It is commonly associated with contact lens use. Foreign bodies and ocu-lar sutures or prosthetics may be causal as well. Treatment typically involves avoid-ance of the inciting process or use of ocular anti-inflammatory agents such as cromo-lyn sodium or topical corticosteroids.

Atopic keratoconjunctivitis (AK) is observed in approximately 15 to 40 percent of patients with atopic dermatitis. Whereas allergic conjunctivitis is usually a self-lim-iting process, AK is chronic and can poten-tially cause loss of vision. Immunological and immunohistochemical studies reveal mast cells, IgE antibody, eosinophils, and other inflammatory cells in similar quanti-ties to those found in allergic conjunctivi-tis. The finding of lymphocyte involvement explains the chronic nature of the disease as well as the threat to sight. Additional findings include antibodies to ICAM-1 and HLA-DR throughout the ocular epithe-lium, suggesting increased antigen presen-tation. Also, increased level of RANTES, an eosinophil homeostasis chemokine, are observed in immunohistochemical studies of the epithelium. Fibroblast numbers are increased in the connective tissue with an increased level of collagen compared with normal tissue. This infiltration is likely critical to the sight-threatening nature of the disease. Table 9.3 summarizes the his-topathological and other laboratory mani-festations of ocular disease. 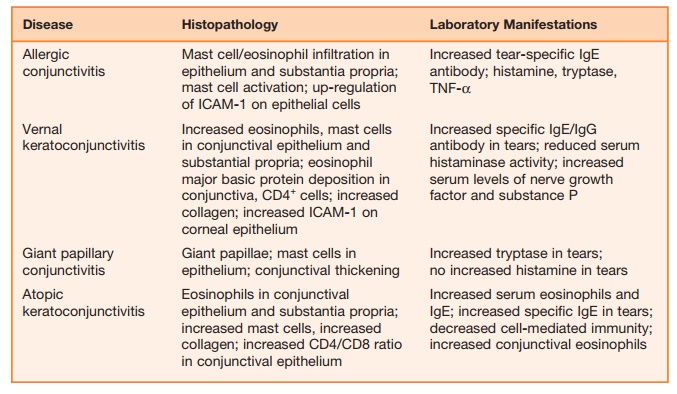 Treatment is aimed at reducing the local inflammation. Ocular mast cell stabilizer drops such as olopatadine are the mainstay of treatment. In addition, treatment of nasal symptoms with nasal anti-inflammatory sprays promotes patency of the nasolac-rimal duct. This combination treatment allows the eye to drain excess allergens, therefore diminishing allergic responses in the eye.

Animal models of ocular allergies have been developed in the past years to estab-lish new therapeutic approaches and assess immunological mechanisms. The current animal models are based on sensitization to and subsequent challenge with small numbers of allergens such as ovalbumin (Ova), ragweed pollen, or cat epithelium. The murine model of allergic conjunctivitis represents the presently preferred species for investigating the immunological basis of the disease.

Magone and colleagues applied such a model to evaluate the role of various cyto-kines, including IL-4, IFN-γ, and IL-12, in the early and late phases of ocular allergy using knockout (KO) mice and neutral-izing antibodies. In this model, multiple mice experimental groups, including

An additional group received recombinant murine IL-12. They found the anti-IL-12 antibody-treated and IL-12KO type mice failed to show allergic cellular infiltration into the conjunctiva. IFN-γ KO type mice, however, had a sig-nificantly stronger immediate-type hyper-sensitivity reactions and prolonged allergic cellular infiltration after ragweed exposure. Overall, their data provided evidence of IL-12 as an inducer of the late phase of ocular allergy. Additionally, the data suggest IFN-γ as a limiting factor of the late phase and a potential therapeutic cytokine in the pre-vention of chronic allergic disease. Further research is aimed at preventing initial sen-sitization to allergens.