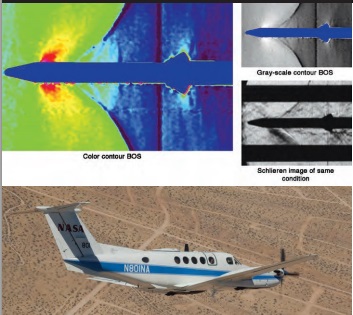 This research project is using a synthetic schlieren technique to study the effects of shock waves on high-speed air travel as part of a larger NASA effort to develop a quieter supersonic vehicle. Conventional schlieren techniques typically require expensive lighting, mirrors, and precise alignment to visualize density gradients and enable shock wave visualization. This technology instead uses computer image processing technology and a less expensive background-oriented schlieren (BOS) technique to visualize shock waves in a wind tunnel. (BOS requires only a charge-coupled device [CCD] camera, a light source, and a speckle-type background, making it a much simpler and less costly option for flow visualization.) This research effort is the first to use a BOS technique to visualize supersonic aircraft shock waves in flight.

Work to date: The team conducted a flight test over the desert using a King Air aircraft equipped with a camera and recording an F/A-18 flying under it at supersonic speed. Researchers used the results to validate the BOS technique.

Looking ahead: The team plans to conduct additional tests with more advanced cameras to obtain higher resolution images. The ultimate goal of NASA's shock wave research is to find ways to control shock waves and lessen their noise so that it may be possible for supersonic flight to become more routine.

Novel: Employs a unique application of a technique to understand how shock waves affect supersonic vehicles

Advanced: Furthers knowledge and tools in