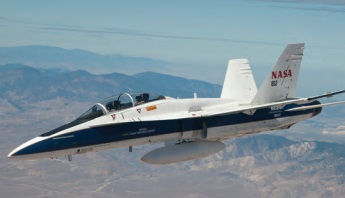 An Armstrong research effort is focused on demonstrating and validating various innovative methods for recording and measuring sonic booms. Activities range from collecting data above and below sonic booms

via a sophisticated array of microphones to gathering information from remote sensors and WiFi-controlled microphones strategically placed within communities. The team is advancing NASA's understanding of how individuals and communities react to low-noise sonic booms.

Work to date: The team supported the Farfield Investigation of No Boom Threshold (FaINT) project and also designed and completed the Waveforms and Sonic boom Perception and Response (WSPR) project.

For the WSPR effort, the team installed WiFi-controlled microphones within a 1- to 2-square-mile area on Edwards Air Force Base, then recorded not only the low-noise sonic booms but also public reaction to them using written and Web-based questionnaires and a smart phone app.

Looking ahead: Data from the recent community response pilot study will be valuable for future public perception studies in communities that do not normally experience sonic booms.