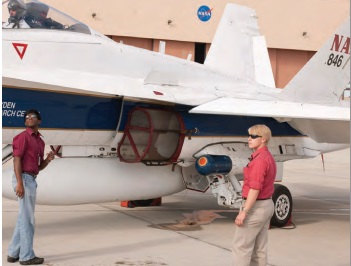 expected to occur. These images will enable researchers to validate data from supersonic models and wind tunnel tests.

Work to date: The team conducted a proof-of-concept demonstration of the ASIS technique during a February 2014 flight test and is evaluating the results.

Looking ahead: The team will continue to test and mature the technology. The sun-ripple concept and aircraft alignment algorithms developed for ASIS are being considered for use on future projects. The team is working to identify potential research partners.

Innovative: Captures side-view images of shock waves, as opposed to the top-down or mostly bottom-up images captured by other techniques