Air Launch from a Towed Glider 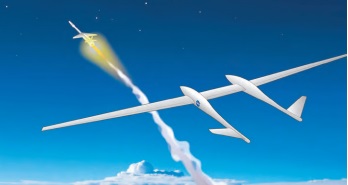 Air Launch from a Towed Glider

This research effort is exploring the concept of launching a rocket from a glider that is towed by an aircraft. The idea is to build a relatively inexpensive remotely piloted glider that could be towed to altitude by a large transport aircraft. The glider would carry a booster rocket capable of launching payloads into orbit. After the rocket launch, the glider would return independently of the tow aircraft to its base to be used again. This

approach could significantly reduce the cost and improve the efficiency of sending satellites into orbit.

Work to date: Three separate technical feasibility studies completed by independent contractors indicate the technique could achieve significant performance gains over vertical ground launches of similar-sized rockets. The Armstrong team has designed and is building a sub-scale research model to test operational aspects and characterize flight performance and handling qualities. Flight testing and crew training have begun on a single fuselage glider that will be towed to altitude.

Looking ahead: Future plans involve continuing work to assemble a one-third scale glider model with a 24-foot wingspan to obtain operational experience while under towed flight as well as performance and handling qualities data. Plans are underway to flight demonstrate a rocket launch from the sub-scale model.

Partner: Whittinghill Aerospace is fabricating a rocket for this air launch flight demonstration, under a Phase III SBIR.

More economical: Use of a simple remotely piloted glider, without the complex propulsion and crew life support systems required for

Increased payload: A towed glider can carry more than twice the payload of a dedicated powered aircraft.

Safer: Remotely piloted gliders that are towed 1,000+ feet behind the tow plane offer a substantial safety perimeter from the high-energy systems inherent in rocket boosters (as compared to other air-launch methodologies).

Akey objective of hypersonic research at NASA is to develop methods and tools that adequately model fundamental physics and allow credible physics-based optimization for future operational hypersonic vehicle systems. Research focuses on solving some of the most difficult challenges in hypersonic flight, and Armstrong innovators are contributing to this research in several ways:

This research will enable the development of highly reliable and efficient hypersonic systems.