Little Bo-Peep has lost her sheep 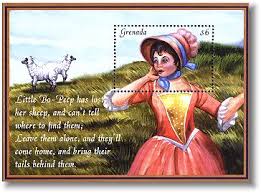 LITTLE BO-PEEP Little Bo-Peep has lost her sheep, •nd_can't_tell_where_to_find_them Leave them alone, •nd_they'll_come_home, And bring their tails behind them.

Little Bo-Peep has lost her sheep,

And doesn't know where to find them;

Wagging their tails behind them.

And dreamt she heard them bleating;

But when she awoke she found it a joke,

For still they all were fleeting.

Then up she took her little crook,

Determined for to find them;

She found 'em indeed, but it made her heart bleed,

For they'd left their tails behind 'em.

It happened one day, as Bo-Peep did stray

Unto a meadow hard by,

There she espied their tails, side by side,

All hung on a tree to dry.

She heaved a sigh, and wiped her eye,

And ran o'er hill and dale-o,

And tried what she could, as a shepherdess should,

To tack to each sheep its tail-o.

Little Bo-Peep has lost her sheep,

And doesn't know where to find them;

Wagging their tails behind them.

How does your garden grow?

With silver bells and cockle shells,

And pretty maids all in a row.

Jack and Jill went up the hill

To fetch a pail of water;

Jack fell down and broke his crown,

And Jill came tumbling after.

Who cut off their tails with a carving knife,

Did you ever see such a sight in your life

Bake me a cake as fast as you can;

Pat it and prick it, and mark it with T,

Put it in the oven for Tommy and me.

He put in his thumb,

And pulled out a plum,

Under the haystack, fast asleep!

Up went Pussy-Cat, down went he,

Down came Pussy-Cat, away Robin ran,

Rock-a-bye baby, on the tree top!

When the wind blows, the cradle will rock;

When the bough breaks, the cradle will fall;

Down will come baby, cradle and all.