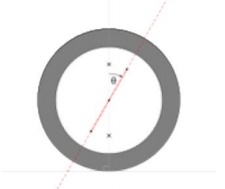 Curves described by the rear wheels of a conventional automobile. While the vehicle moves with a constant speed its inner and outer rear wheels do not.

The basic aim of steering is to ensure that the wheels are pointing in the desired directions. This is typically achieved by a series of linkages, rods, pivots and gears. One of the fundamental concepts is that of caster angle – each wheel is steered with a pivot point ahead of the wheel; this makes the steering tend to be self-centering towards the direction of travel.

The steering linkages connecting the steering box and the wheels usually conforms to a variation of Ackermann steering geometry, to account for the fact that in a turn, the inner wheel is actually travelling a path of smaller radius than the outer wheel, so that the degree of toe suitable for driving in a straight path is not suitable for turns. The angle the wheels make with the vertical plane also influences steering dynamics (see camber angle) as do the tires. 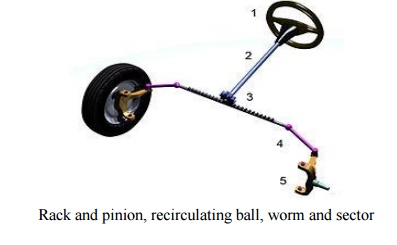 Rack and pinion unit mounted in the cockpit of an Ariel Atom sports car chassis. For most

high volume production, this is usually mounted on the other side of this panel

Steering box  of a motor vehicle, the traditional (non-assisted), you may notice that  the

system allows you to adjust the braking and steering systems, you can also see the attachment

system to the frame.

Many modern cars use rack and pinion steering mechanisms, where the steering wheel turns the pinion gear; the pinion moves the rack, which is a linear gear that meshes with the pinion, converting circular motion into linear motion along the transverse axis of the car (side to side motion). This motion applies steering torque to the swivel pin ball joints that replaced previously used kingpins of the stub axle of the steered wheels via tie rods and a short lever arm called the steering arm.

The rack and pinion design has the advantages of a large degree of feedback and direct steering "feel". A disadvantage is that it is not adjustable, so that when it does wear and develop lash, the only cure is replacement.

Older designs often use the recalculating ball mechanism, which is still found on trucks and utility vehicles. This is a variation on the older sector design; the steering column turns a large screw (the "worm gear") which meshes with a sector of a gear, causing it to rotate about its axis as the worm gear is turned; an arm attached to the axis of the sector moves the Pitman arm, which is connected to the steering linkage and thus steers the wheels. The recalculating ball version of this apparatus reduces the considerable friction by placing large ball bearings between the teeth of the worm and those of the screw; at either end of the apparatus the balls exit from between the two pieces into a channel internal to the box which connects them with the other end of the apparatus, thus they are "recalculated".

The recirculating ball mechanism has the advantage of a much greater mechanical advantage, so that it was found on larger, heavier vehicles while the rack and pinion was originally limited to smaller and lighter ones; due to the almost universal adoption of power steering, however, this is no longer an important advantage, leading to the increasing use of rack and pinion on newer cars.

The recirculating ball design also has a perceptible lash, or "dead spot" on center, where a minute turn of the steering wheel in either direction does not move the steering apparatus; this is easily adjustable via a screw on the end of the steering box to account for wear, but it cannot be entirely eliminated because it will create excessive internal forces at other positions and the mechanism will wear very rapidly. This design is still in use in trucks and other large vehicles, where rapidity of steering and direct feel are less important than robustness, maintainability, and mechanical advantage.

The worm and sector was an older design, used for example in Willys and Chrysler vehicles, and the Ford Falcon (1960s).

Other systems for steering exist, but are uncommon on road vehicles. Children's toys and go-karts often use a very direct linkage in the form of abellcrank (also commonly known as a Pitman arm) attached directly between the steering column and the steering arms, and the use of cable-operated steering linkages (e.g. the Capstan and Bowstring mechanism) is also found on some home-built vehicles such as soapbox cars and recumbent tricycles.