A Review of anatomy of the female reproductive system: 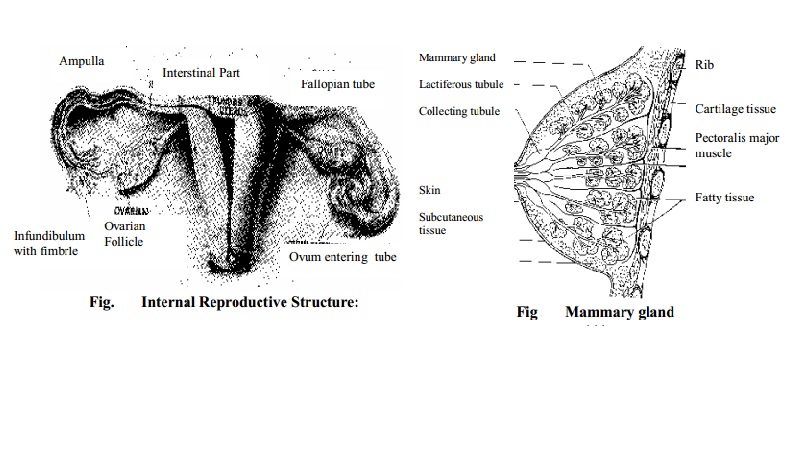 The female reproductive system consists of the external and internal structures.

A Review of anatomy of the female reproductive system:

The female reproductive system consists of the external and internal structures.

The term ' vulva' denotes the external female genital organs. It consists of the following structures.

Two folds of fat and areolar tissue, covered with skin and pubic hair on the outer surface.

Two smaller lips of delicate tissue, which lie within the labia majora.

A small rudimentary organ, which is highly sensitive.

External opening of the female urethra.

External orifice of the vagina.

Is situated on each side of the vaginal orifice.

It is a passage for the escape of menstrual flow and is the exit for the fetus during delivery. It is a canal lined with mucous membrane, which extends from the vulva to the cervix.

The uterus is a hollow, muscular, pear shaped organ situated in the true pelvis. It shelters the fetus during pregnancy and it expels the uterine contents at term.

The uterus consists of the following parts.

2.     The fundus is the domed upper wall above the insertion of the fallopian tubes.

3.     The cornua is the place where the fallopian tubes join the uterus.

4.     The cavity is the triangular shaped potential space between anterior and posterior wall inside the uterine cavity.

5.     The cervix or neck protrudes into the vagina, consists of internal OS and external OS.

Layers of the uterus:

The uterus has three layers:

The fallopian tubes propel the ovum towards the uterus, receive the spermatozoa as they travel upwards and provide a site for fertilization. It supplies nutrition to the fertilised ovum during its journey towards the uterus.

The uterine tubes extend laterally from the cornua of the uterus towards the side-walls of the pelvis, arching over the ovaries.

The ovaries produce ovum and the female hormones oestrogen and progesterone. The cortex of the ovary is the functioning part of the ovary. It contains the ovarian follicles in different stages of development surrounded by stroma.

The breasts are two hemispherical organs, are also linked with the female reproductive system. They are secretary glands reaching full development in female only.

They are composed mainly of glandular tissue arranged in lobes. Each lobe is divided into lobules called alveoli, which are lined with secreting cells, which produce milk. The nipple is composed of erectile tissue covered which epithelium which contains plain muscle fibres which act as sphincter to control the flow of milk. The loose skin sorrounding the nipple is called the areola.

Progesterone and oestrogen stimulate the development and secretary functions of the mammary gland. The hormone prolactin initiates the production of milk.

The female pelvis (gynaecoid pelvis) is well adapted for childbearing by nature. The gynaecoid pelvis has the characteristics giving rise to no difficulties in childbirth with a normal size baby.

The size and shape of the female pelvis is the most important factor during childbearing and childbirth. Fetal head makes certain movements during its descent through pelvis so that the smallest diameter of the fetal head is easily brought to the largest diameter of the bony pelvis.

Pelvic is made up of four bones

Innominate bones are made up of three

The true pelvis is the bony canal through which fetus must pass during birth. It consists of a brim, cavity and outlet.