The clinically important α-blockers fall primarily into three chemical groups: the haloalkylamines ( e.g., phe- noxybenzamine), the imidazolines (e.g., phentolamine), and the quinazoline derivatives (e.g., prazosin). Of these three classes of α-adrenoceptor antagonists, the quina-zoline compounds are of greatest clinical utility. The use of the haloalky-lamines and imidazolines has diminished in recent years because they lack selectivity for α1- and α 2-receptors. Comparative information concerning the three chemi-cal classes of antagonists is presented in Table 11.1 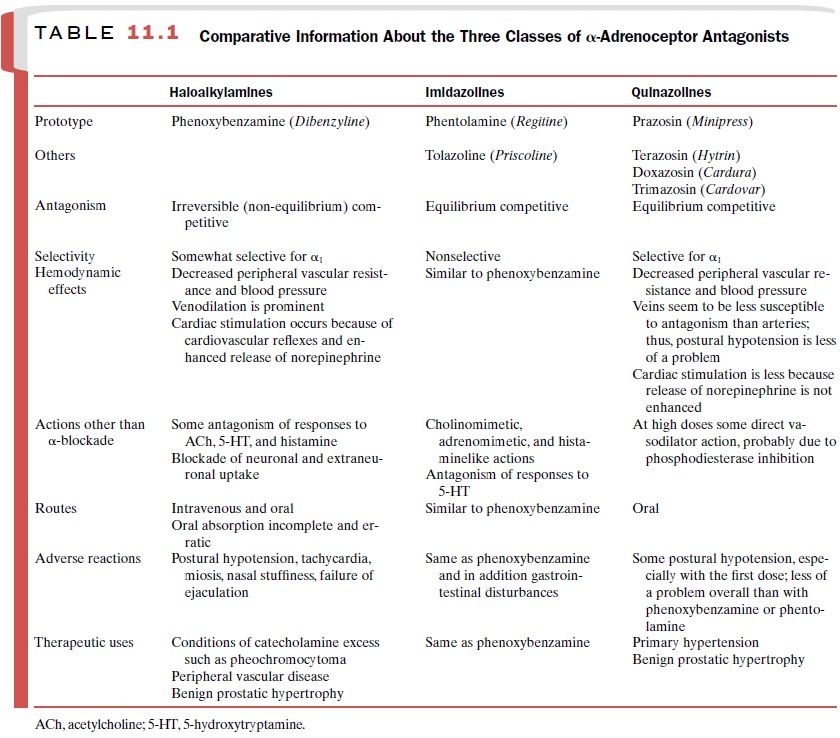 The chief use of these drugs is in the management of pri-mary hypertension. Examples of quinazoline α-blockers include prazosin (Minipress), trimazosin (Cardovar), terazosin (Hytrin), and doxazosin (Cardura).

The -antagonism produced by prazosin and the other quinazoline derivatives is of the equilibrium-competi-tive type. The drugs are selective for α1-adrenoceptors, so that at usual therapeutic concentrations there is little or negligible antagonism of α2-adrenoceptors. However, selectivity is only relative and can be lost with high drug concentrations. While most of the pharmacological ef-fects of prazosin are directly attributable to 1-antago-nism, at high doses the drug can cause vasodilation by a direct effect on smooth muscle independent of -recep-tors. This action appears to be related to an inhibition of phosphodiesterases that results in an enhancement of intracellular levels of cyclic nucleotides.

Prazosin is readily absorbed after oral administration, peak serum levels occur approximately 2 hours after a single oral dose, and the antihypertensive effect of pra-zosin persists for up to 10 hours. Its half-life in plasma ranges from 2.5 to 4 hours, and elimination from plasma appears to follow first-order kinetics. The drug is exten-sively (perhaps as high as 97%) bound to plasma pro-teins; this observation partially explains the lack of cor-relation between plasma drug levels and persistence of antihypertensive effect.

Hepatic O-dealkylation and glucuronide formation appear to be major pathways of biotransformation. Only about 10% of orally administered prazosin is ex-creted in the urine. Plasma levels of prazosin are in-creased in patients with renal failure; the nature of this interaction is unknown.

The most important pharmacological effect of prazosin is its ability to antagonize vascular smooth muscle contrac-tion that is caused by either sympathetic nervous activity or the action of adrenomimetics.

Hemodynamically, the effects of prazosin differ from those of phenoxybenza-mine and phentolamine in that venous smooth muscle is not as much affected by prazosin. Postural hypotension during chronic treatment is also less of a problem. Also, increases in heart rate, contractile force, and plasma renin activity, which normally occur after the use of va-sodilators and α-blockers, are much less prominent fol-lowing chronic treatment with prazosin.

Phenoxybenzamine and phentolamine, in addition to blocking postsynaptic α -receptors, also block α 2-receptors on nerves and therefore can enhance the re-lease of norepinephrine. When norepinephrine exerts a postsynaptic action by means of β-adrenoceptors (e.g., cardiac stimulation, renin release), blockade of presy-naptic α2-receptors by phenoxybenzamine and phentol-amine may actually potentiate the responses. Prazosin blocks responses mediated by postsynaptic α 1-receptors but has no effect on the presynaptic α 2-receptors. Thus, stimulation of the heart and renin release is less promi-nent with this drug.

Prazosin is effective in reducing all grades of hyper-tension. The drug can be administered alone in mild and (in some instances) moderate hypertension. When the hypertension is moderate or severe, prazosin gen-erally is given in combination with a thiazide diuretic and a β-blocker. The antihypertensive actions of pra-zosin are considerably potentiated by coadministra-tion of thiazides or other types of antihypertensive drugs.

Prazosin may be particularly useful when patients cannot tolerate other classes of antihypertensive drugs or when blood pressure is not well controlled by other drugs. Since prazosin does not significantly influence blood uric acid or glucose levels, it can be used in hy- pertensive patients whose condition is complicated by diabetes mellitus or gout.

Prazosin and other -antagonists find use in the management of benign prostatic obstruction, especially in patients who are not candidates for surgery. Blockade of α-adrenoceptors in the base of the bladder and in the prostate apparently reduces the symptoms of obstruc-tion and the urinary urgency that occurs at night.

Although less of a problem than with phenoxybenza-mine or phentolamine, symptoms of postural hypoten-sion, such as dizziness and light-headedness, are the most commonly reported side effects associated with prazosin therapy. These effects occur most frequently during initial treatment and when the dosage is sharply increased. Postural hypotension seems to be more pro-nounced during NA+ deficiency, as may occur in patients on a low-salt diet or being treated with diuretics, β- blockers, or both.