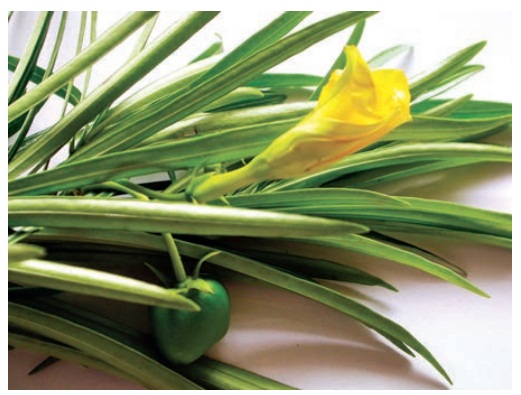 It is an ornamental shrub (that grows to about 30 feet height) belonging to family Apocynaceae with longish (about 15 cm long) leaves yielding a milky sap, and yellowish funnel-shaped flowers (Fig 25.6 ). The leaves are pointed, with dark green upper surface, and lighter green undersides. The edges are often rolled. Fruit is diamond shaped or clam shaped, and has 2 to 4 seeds in its stony inner section. It is about ½ inch in size, greenish at first, and turning yellow when ripe, and may even appear blackish in the later stages. The kernel (seed) is very toxic (Fig 25.7). All parts of the plant contain a milky juice or sap. 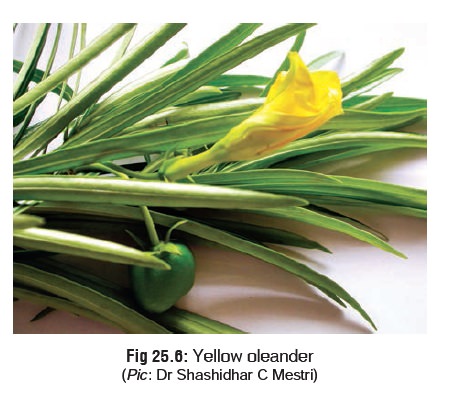 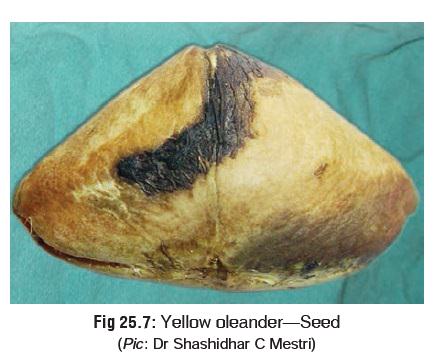 ■■   Like common oleander, yellow oleander is also used in traditional Indian medicine for the treatment of various ailments.

■■   Bark extracts containing cardenolides have been investigated as cytotoxic agents in cancer research.

The rest of the information is essentially the same as that for common oleander (vide supra), though toxicity is likely to be more severe.

The commonest manifestations associated with yellow oleander poisoning include bradycardia with AV block, hypo-tension, lethargy, dizziness, and GI distress. Convulsions, electrolyte disturbances, hypertension, and coma have also been reported. Mydriasis may occur. Numbness and burning sensation of the mouth may develop.

The sap of yellow oleander tree may cause blistering or dermatitis on contact.

Subendocardial and perivascular haemorrhage with focal myocardial oedema have been found during autopsies of some of the patients who died.

Cardiac glycosides of this plant are best identified by radioimmunoassay.

As far as specific treatment is concerned, it has been shown that anti-digoxin Fab fragments are effective in the management of yellow oleander-induced arrhythmias. They rapidly restore sinus rhythm, and revert bradycardia and hyperkalaemia back to normalcy. Digoxin Fab fragments are indicated if the potas-sium concentration exceeds the upper limit of the normal range (5 mEq/L), in association with other severe symptoms. Even if the exact cause is uncertain as to whether yellow oleander is the culprit in a given case, some investigators recommend the empiric administration of 10 vials of digoxin-specific Fab. However, serum potassium can drop steeply, and must be monitored frequently for several hours post-administration. This is especially likely to occur if Fab fragments have been given along with glucose, insulin, and bicarbonate. The latter combination therapy (glucose, insulin, and bicarbonate) must be tried only if Fab fragments are not available.

Certain steroid compounds such as spironolactone and pregnenolone-16alpha-carbonitrile have been shown to decrease glycoside toxicity by increasing biliary excretion. Although not yet tried in humans, these agents could be tried as a treatment modality.