Aconitum species, of which there are 350 worldwide. Aconitum napellus is the European variety, A. columbianum, A. reclinatum, and A. uncinatum are encountered in America, A. japonicum, and A. carmichaelii are Oriental varieties,while Indian species include A. ferox, A. chasmanthum, A.cordatum, and A. balfouri.

This plant belongs to family Ranunculaceae and grows well in the hilly regions of Northern and Eastern parts of India, extending from Assam to Kashmir. It is a perennial herb with distinctive helmet shaped flowers, which may be blue, purple, or pinkish white in colour (Fig 25.1). The root is stout and dark (Fig 25.2), and has a superficial resemblance to horseradish (Fig 25.3). 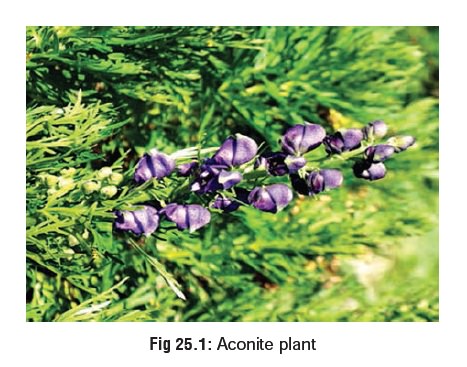 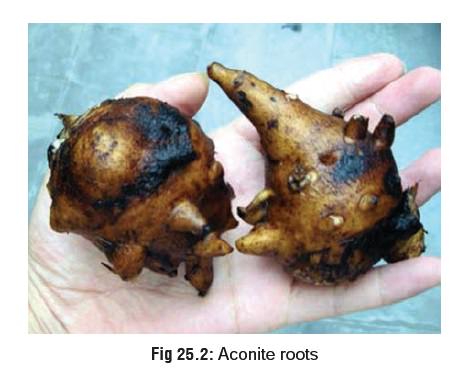 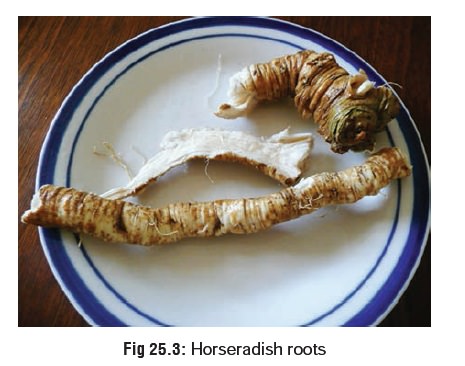 All parts, but the root is most toxic. It is said to have a bitter-sweet taste.*

·     Indian species contain hypoaconitine and mesoaconitine which are less potent.

Aconite species contain diterpene (C20) and norditerpene (C19) alkaloids, the nitrogen molecule of which is usually ethylated or methylated to make them alkamines. C20 diter-penes are relatively low in toxicity, but the esterified, nord-iterpene bases have high toxicity. If the ester functions are hydrolysed, toxicity is reduced to that of ordinary diterpenes.

·              The tuber is very popular in Chinese medicine for the treat-ment of various ailments. The root is usually processed by drying, soaking, or boiling, which significantly reduces its toxicity. Raw aconite roots are highly toxic. Herbal decoctions of aconite are generally prepared by soaking the roots in water or saturated lime water and then boiling. This causes hydrolysis of aconite alkaloids to less toxic benzylaconine and aconine derivatives.

·              Formerly, aconite found mention in the British Pharmacopoeia (until 1953), but today it is only used in allopathic medicine as a proarrhythmic agent in animal studies to test the efficacy of antiarrhythmic agents.

However, deaths have been reported with as little as 1 grams of root, 0.2 mg of aconitine, and 5 ml of aconite tincture. It has been estimated that an adult lethal dose is generally about 1 grams of plant part (root), 5 ml of a prepared tincture, or 2 mg of pure aconite.

Drying and storing these plants could result in changes in the composition and even transformation of the alkaloidal content, thus altering toxicity of individual exposures.

Aconitine acts on nerve axons by opening sodium channels, as well as by inhibiting complete repolarisation of the membrane of myocardial tissue, causing repetitive firing.

Symptoms generally begin within 10 to 20 minutes of ingestion. A tingling or burning sensation in the fingers and toes is usually seen first, followed by sweats and chills, a generalised paraes-thesia, dryness of mouth, and numbness. The following are seen:

·        GIT: Nausea, hypersalivation, vomiting, diarrhoea­.Chewing on a root may cause swelling of the lips, tongue, and mouth, making speech difficult.

·        CNS: Tingling and numbness of mouth and lips whichmay extend to the limbs, followed by convulsions. Initial feelings of numbness may progress to paralysis of the skeletal muscles. Vertigo is often present. The following have been reported: severe headache, restlessness, and confusion. Muscular fasciculations may lead to tonic or clonic seizures. Ataxia is often present.

·        Eye: Visual blurring, fluctuant pupils (hippus), mydriasis.Miosis may be seen until the patient develops hypoxia. Xanthopsia (yellow halos around objects) has been reported.

·        Metabolic acidosis has developed in a few patients.

·        Death usually occurs from ventricular arrhythmias or respiratory paralysis, and this may happen in just a few minutes, or take several days.

·            Extensive vomiting and diarrhoea often necessitate fluid and electrolytes to be given in substantial doses.

·            There is no specific antidote. Treatment is symptomatic and supportive after decontamination.

·            Treat convulsions with benzodiazepines, followed by phenytoin, if required.

·            Bradyarrhythmia and hypersalivation respond to atropine.

·            Institute continuous cardiac monitoring. Arrhythmias are unfortunately often refractory to drug management. No single antiarrhythmic agent has been found to be uniformly effective for controlling tachyarrhythmias. DC cardiover-sion is not effective. Calcium gluconate or chloride may help reverse arrhythmias in some cases. They must be followed up with magnesium sulfate.

·            In one animal study, flecainide, a sodium-channel blocker, as well as a beta blocker, was an effective antiarrhythmic for aconite poisoning.

·            In one patient with severe aconite-induced cardiotoxicity, cardiopulmonary bypass and a left ventricular assist device were found to be beneficial.

·              Poisoning with aconite has never been common. Most reported cases are accidental in nature, resulting from thera-peutic misadventures. Aconite is used in herbal medicines (cold preparation, antipyretic, digestive and general tonic, etc.), or to increase the intoxicating effect of alcoholic beverages. Fatalities have been reported with the use of tincture aconite added to liquor.

·     A few cases result from mistaken identity with horse-radish.* Rarely, suicides and homicides have been reported.