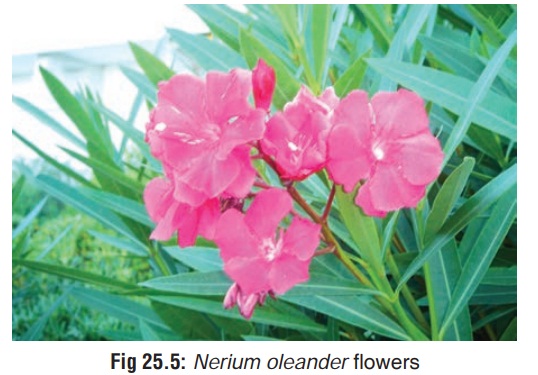 This plant belonging to family Apocynaceae is a large evergreen ornamental shrub with long lanceolate leaves and clusters of whitish or pinkish flowers (Fig 25.4 and Fig 25.5). The leaves produce a clear, thick sap. 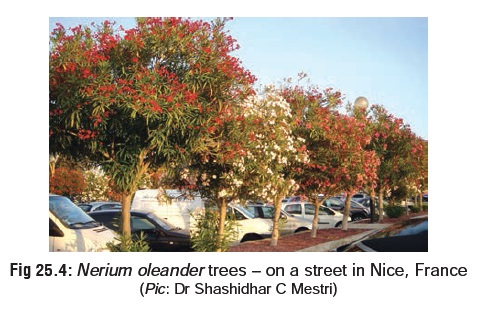 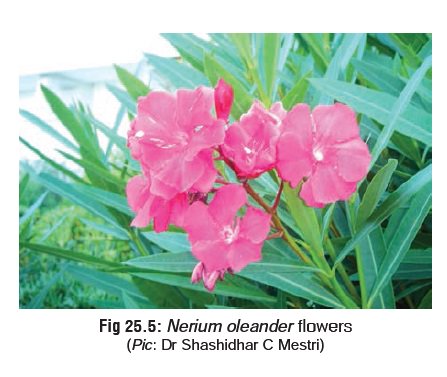 All parts, especially the root.

·              Decoction of the leaves and root are used in Indian tradi-tional medicine as local applications for various skin ailments.

All the glycosides have digoxin-like effects; they inhibit sodium-potassium ATPase.

Symptoms generally begin within 10 to 20 minutes of inges-tion. A tingling or burning sensation in the fingers and toes is usually seen first, followed by sweats and chills, a generalised paraesthesia, dryness of mouth, and numbness. The following are seen:

·      CNS: Delirium, lethargy, dizziness, drowsiness.Occasionally there may be seizures, and coma.

·      Because oleander-derived cardiac glycosides are cross-reactive with the frequently used radio-immunoassays for digoxin, an elevated level may help confirm suspicion of oleander poisoning.

·      Thin-layer chromatography and fluorescence spectropho-tometry can also be used to identify oleander glycosides.

·              All patients with a history of cardiac glycoside-containing plant ingestion should have a baseline ECG and electrolytes. Patients who at presentation show signs of toxicity, independent of the dose ingested, should be admitted to the ICU for at least 24 hours of observation and treatment.

·              Gastric lavage, activated charcoal: Gastric lavage is of limited benefit in patients ingesting plant parts, particularly children, because of the size of the plant parts relative to the lavage tube. Also, the procedure may worsen bradycardia secondary to vagal stimulation. Whole gut lavage may be more useful in such situations.

·      Careful measurement of serum potassium is one of the most important laboratory tests to be done, since hyperkalaemia is quite common. The emergency management of life-threatening hyperkalaemia (potassium levels greater than 6.5 mEq/L) includes IV bicarbonate, glucose, and insulin (administer 0.2 unit/kg of regular insulin with 200 to 400 mg/kg glucose). Concurrent administration of IV sodium bicarbonate (about 1 mEq/kg) is of additive value in rapidly lowering serum potassium levels.

·      Atropine for sinus bradycardia and AV block: 1 mg IV; repeat in 3 to 5 minutes if asystolic cardiac arrest persists. 3 mg (0.04 mg/kg) IV is generally considered to be a fully vago-lytic dose in most adults. Insertion of a pacemaker should be considered in those patients with severe bradycardia, and/ or slow ventricular rate due to second degree AV block who fail to respond to atropine (and/or phenytoin).

·      Antiarrhythmics (e.g. lignocaine): Lignocaine is useful in the management of ventricular tachy-arrhythmias, PVCs, and bigeminy.

·      Digoxin-specific Fab fragment therapy is said to be effec-tive. Treatment with Fab fragments should be considered in those severely intoxicated patients who fail to respond to immediately available conventional therapy.

·      Haemodialysis is ineffective in removing cardiac glyco-sides, but may assist in restoring serum potassium to normal levels.

·              Accidental poisoning from its use in traditional medicine. Suicidal ingestion of decoction prepared from leaves or root is fairly common in rural areas.

·              Homicidal cases are rare, but have been reported. In one attempeted case of murder, a middle-aged male presented to the ED with a two-month history of nausea, anorexia, colicky abdominal pain, vomiting, diarrhoea, lethargy, confusion, dry mouth, dizziness, paraesthesias, tremor, and episodes of slurred speech with blurred, yellowish vision. Subsequent police investigation revealed that the wife was attempting to poison him by using water boiled with roots of Nerium oleander for making coffee over an eight-week period.