The XML Path Language (XPath) is a standard for creating expressions that can be used to find specific pieces of information within an XML document. XPath expressions are used by both XSLT (for which XPath provides the core functionality) and XPointer to locate a set of nodes. To understand how XPath works, it helps to imagine an XML doc-ument as a tree of nodes consisting of both elements and attributes. An XPath expression can then be considered a sort of roadmap that indicates the branches of the tree to follow and what limbs hold the information desired. The complete documentation for the XPath recommendation can be found at http://www.w3c.org/TR/xpath.

TABLE 5.1      Operators and Special Characters for the XML Path Language 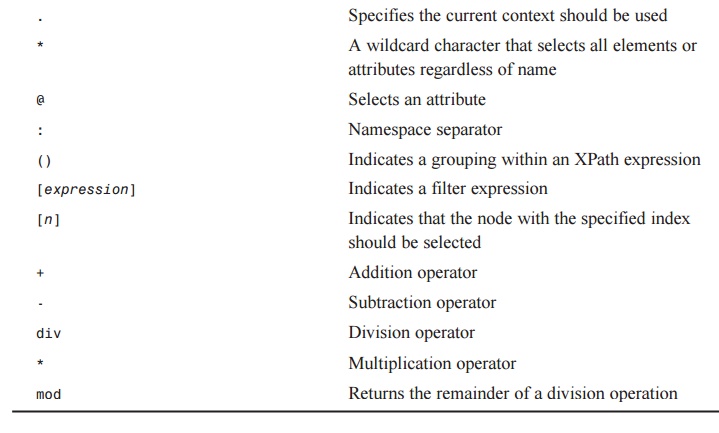 Table 5.1 only provides a list of operators and special characters that can be used within an XPath expression. However, the table does not indicate what the order of precedence is. The priority for evaluating XPath expressions is as follows:

The XML Path Language provides a declarative notation, termed a pattern, used to select the desired set of nodes from XML documents. Each pattern describes a set of matching nodes to select from a hierarchical XML document. Each pattern describes a “navigation” path to the desired set of nodes similar to the Uniform Resource Identifier (URI) syntax. However, instead of navigating a file system, the XML Path Language navigates a hierarchical tree of nodes within an XML document.

Each “query” of an XML document occurs from a particular starting node that defines the context for the query. The context for the query has a very large impact on the results. For instance, the pattern that locates a node from the root of an XML document will most likely be a very different pattern when looking for the same node from some-where else in the hierarchy.

As mentioned earlier in this chapter, one possible result from performing an XPath query is a node set, or a collection of nodes matching a specified search criteria. To receive these results, a “location path” is needed to locate the result nodes. These location paths select the resulting node set relative to the current context. A location path is, itself, made up of one or more location steps. Each step is further comprised of three pieces:

Therefore, the basic syntax for an XPath expression would be something like this:

Using this basic syntax and the XML document in Listing 5.1, we could locate all the <c> nodes by using the following XPath expression:

Alternatively, we could issue the following abbreviated version of the preceding expression:

This is what’s known as a “relative” XPath expression.

The axis portion of the location step identifies the hierarchical relationship for the desired nodes from the current context. An axis for a location step could be any of the items listed within Table 5.2. 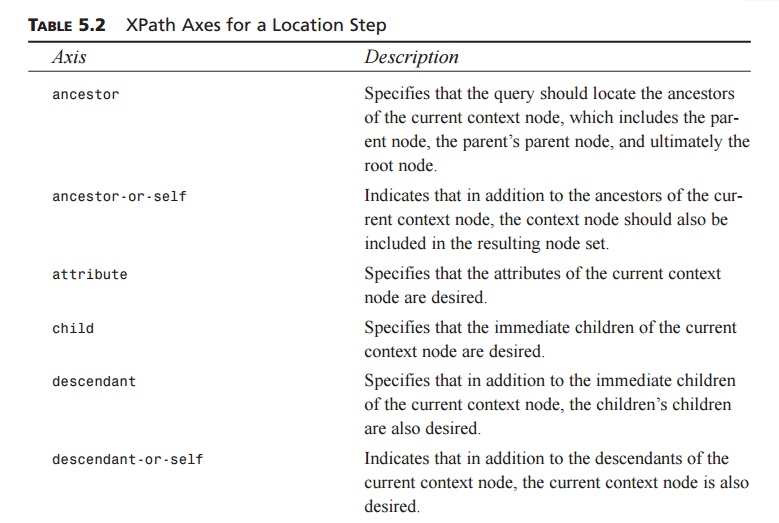 Using this sample XML document as a reference, and the following XPath query, we can examine how the current context node is determined: 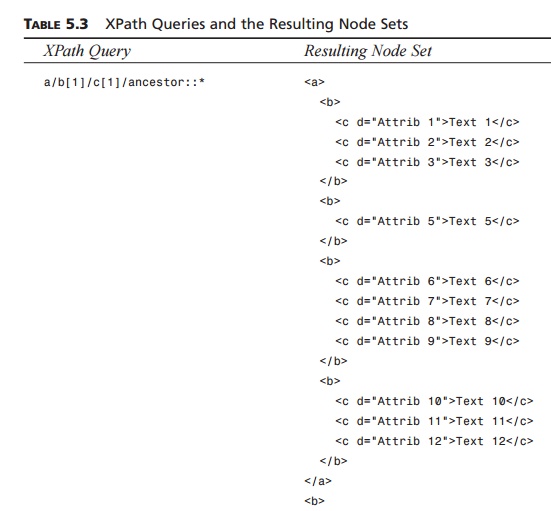 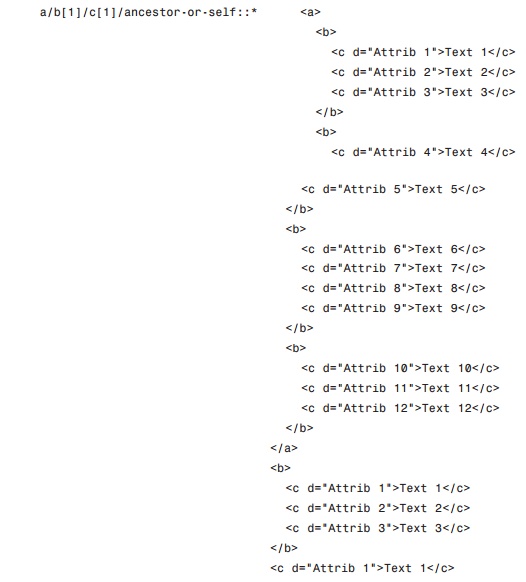 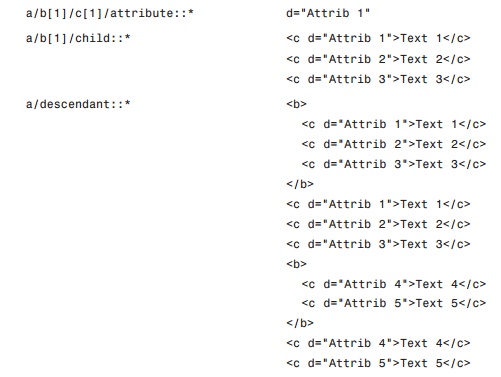 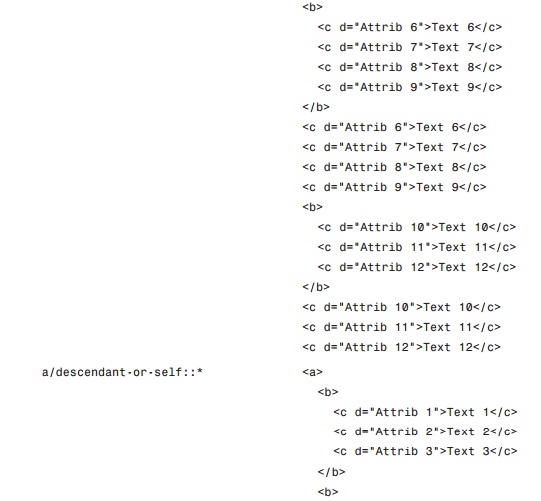 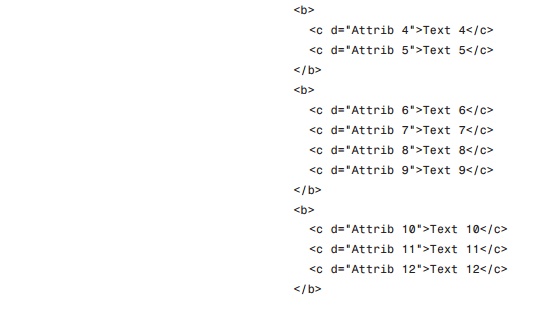 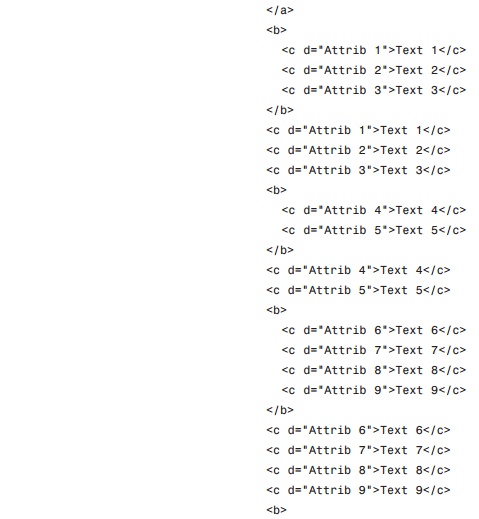 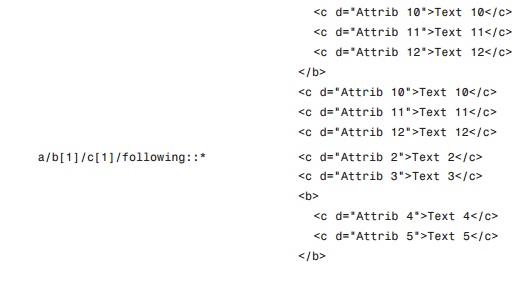 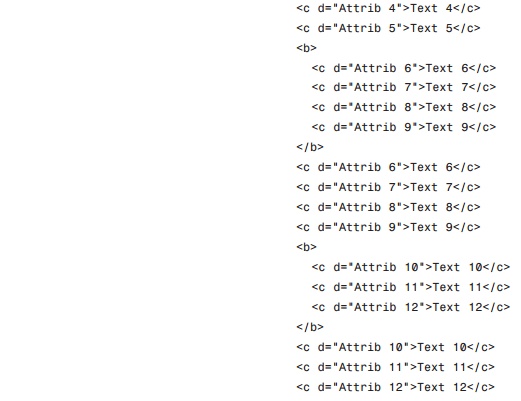 From the contents of Table 5.3, you can see what may be some strange results. However, it’s important to remember that a resulting node set contains the entire hierarchy for the nodes contained within the set. Keeping that in mind, the results for the XPath queries in Table 5.3 begin to make more sense.

A node test may also contain a node name, or QName. In this case, a node with the speci-fied name is sought, and if found, it’s returned in the node set. However, the nodes selected in this manner must be the principal node type sought and have an expanded name equal to the QName specified. This means that if the node belongs to a namespace, the namespace must also be included in the node test for the node to be selected. For instance, ancestor::div and ancestor::test:div will produce two entirely different node sets. In this first case, only nodes that have no namespace specified and have a name of div will be selected. In the second case, only those div nodes belonging to the test namespace will be selected.

In addition to specifying an actual node name, other node tests are available to select the desired nodes. Here’s a list of these node tests:

The predicate portion of a location step filters a node set on the specified axis to create a new node set. Each node in the preliminary node set is evaluated against the predicate to see whether it matches the filter criteria. If it does, the node ends up in the filtered node set. Otherwise, it doesn’t.

A predicate within a location step may contain an expression that, when evaluated, results in a Boolean (or logical) value that can be either True or False. For instance, if the result of the expression is a number, such as in the expression /a/b[position()=2], then the predicate [position()=2] is evaluated for each node in the axis to see whether it is the second node, and if so, it returns True for the predicate. In fact, the expressions for a predicate can get rather complex because you are not limited to one test condition within a predicate—you may use the Boolean operators and and or. Using these two operators, you can create very powerful filter conditions to find the desired node set. Predicates may also consist of a variety of functions.

XPath predicates may, and most probably will, contain a Boolean comparison, as listed in Table 5.4. 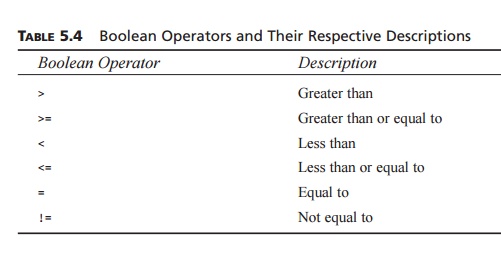 XPath functions are used to evaluate XPath expressions and can be divided into one of four main groups:

Each of these main groups contains a set of functions that deal with specific operations needed with respect to the items covered. Table 5.5 lists each XPath function available as well as the arguments accepted, the return type, and a brief description. 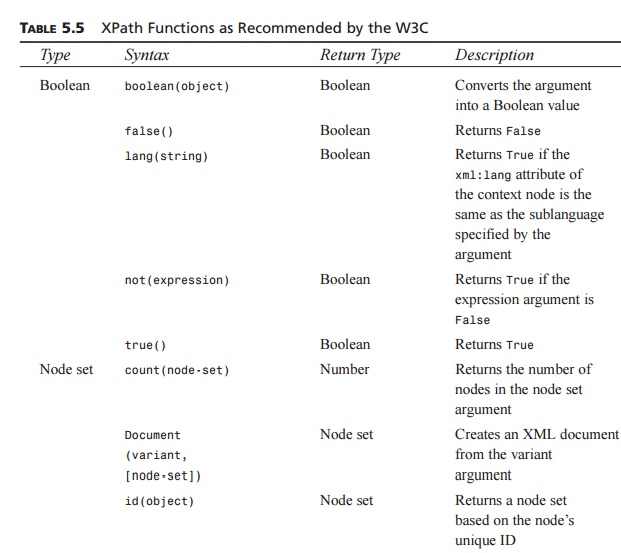 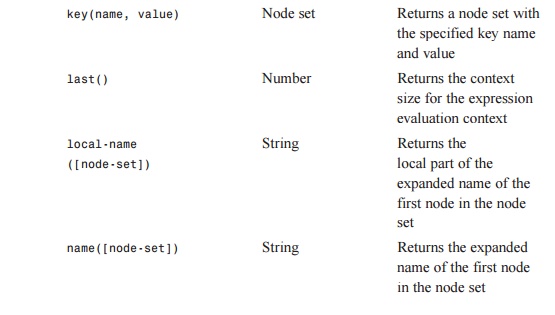 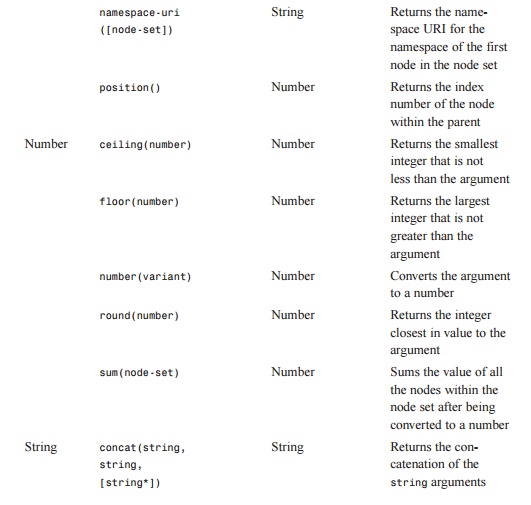 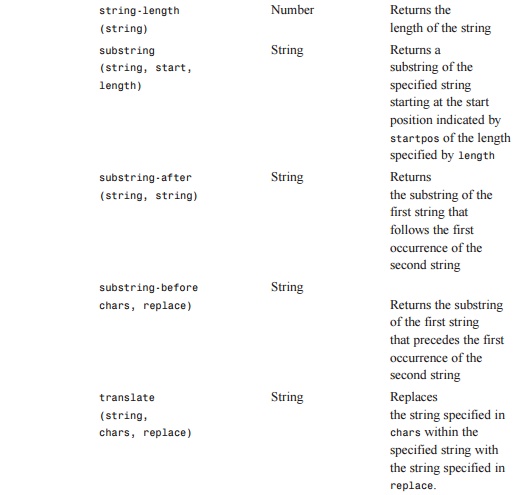 As you can see in Table 5.5, a large number of functions are available that perform a myriad of operations. These functions can be used within a location-step predicate to help filter out undesired nodes. They also help in providing functionality that without which would make the XPath language quite limiting.

You have seen the basic construction of each piece of an XPath query, but in truth, it helps to see the XPath expressions and the results for them. Therefore, to help with this and to provide as many examples as possible, we will use the code in Listing 5.2, which provides a good baseline sample XML document we can use for the XPath examples

LISTING 5.2 Sample2.xml Provides the XML Document Against Which the Sample XPath Expressions Will Be Evaluated

As you can see, Listing 5.2 looks very similar to Listing 4.1. This is basically the same sample XML document we used in Chapter 4, “Creating XML Schemas,” but it has been slightly modified to perform as a better example for XPath queries. Using this sample XML document, Table 5.6 contains sample XPath expressions and their respective results. 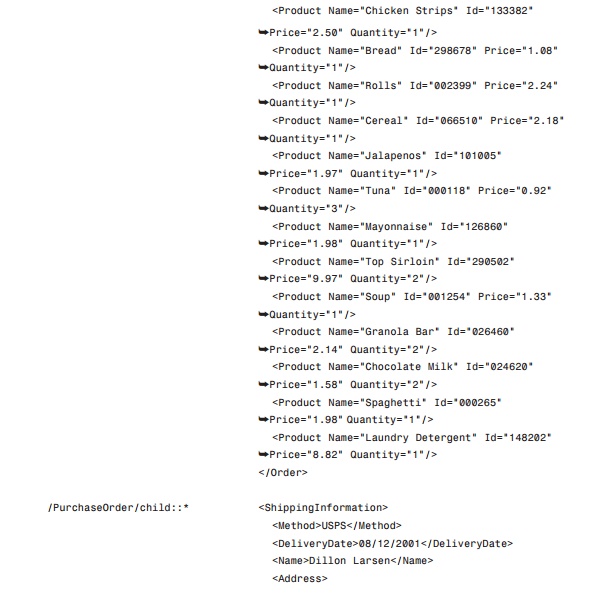 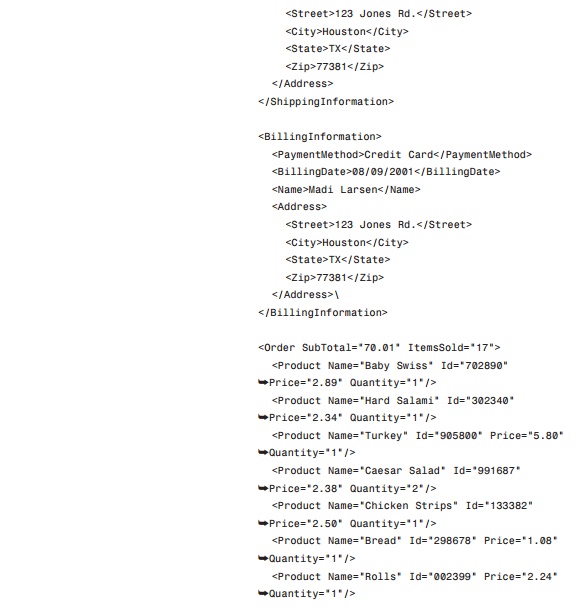 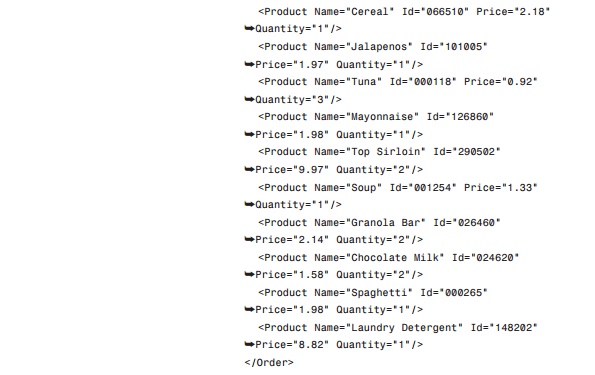 As you can see from the examples in Table 5.6, XPath expressions can get rather long and complex. For this reason, an abbreviated syntax has also been introduced. Table 5.7 lists the XPath expressions and their respective abbreviations.

TABLE 5.7      XPath Expressions and Their Abbreviations