One of the simplest sine wave oscillators which uses a RC network in place of the conventional LC tuned tank circuit to produce a sinusoidal output waveform, is the Wien Bridge Oscillator.

One of the simplest sine wave oscillators which uses a RC network in place of the conventional LC tuned tank circuit to produce a sinusoidal output waveform, is the Wien Bridge Oscillator.

The Wien Bridge Oscillator is so called because the circuit is based on a frequency-selective form of the Whetstone bridge circuit. The Wien Bridge oscillator is a two-stage RC coupled amplifier circuit that has good stability at its resonant frequency, low distortion and is very easy to tune making it a popular circuit as an audio frequency oscillator 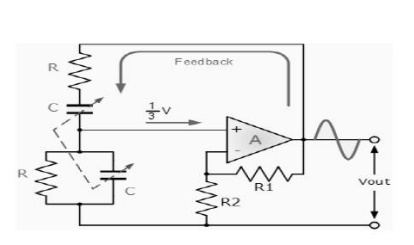 The output of the operational amplifier is fed back to both the inputs of the amplifier. One part of the feedback signal is connected to the inverting input terminal (negative feedback) via the resistor divider network of R1 and R2 which allows the amplifiers voltage gain to be adjusted within narrow limits.

Also the voltage gain of the amplifier circuit MUST be equal to three "Gain =3" for oscillations to start. This value is set by the feedback resistor network, R1 and R2 for an inverting amplifier and is given as the ratio -R1/R2.

Also, due to the open-loop gain limitations of operational amplifiers, frequencies above 1MHz are unachievable without the use of special high frequency op-amps. Then for oscillations to occur in a Wien Bridge Oscillator circuit the following conditions must apply.

2. The Wien Bridge Oscillator can produce a large range of frequencies.

3. The Voltage gain of the amplifier must be at least 3.

4. The network can be used with a Non-inverting amplifier.

5. The input resistance of the amplifier must be high compared to R so that the RC network is not overloaded and alter the required conditions.

6. The output resistance of the amplifier must be low so that the effect of external loading is minimised.

7.  Some  method  of  stabilizing  the  amplitude  of  the  oscillations  must  be  provided because  if the voltage gain of the amplifier is too small the desired oscillation will decay and stop and if it is too large the output amplitude rises to the value of the supply rails, which saturates the op-amp and causes the output waveform to become distorted.

8. With amplitude stabilisation in the form of feedback diodes, oscillations from the oscillator can go on indefinitely.