Home | | Clinical Cases in Anesthesia | What are the treatment options for each of the discussed dysrhythmias? What would you do for this patient?
Posted On :  08.09.2017 08:25 pm

What are the treatment options for each of the discussed dysrhythmias? What would you do for this patient?

Complete discussion of all the treatment options for every dysrhythmia is beyond the scope of this discussion.

What are the treatment options for each of the discussed dysrhythmias? What would you do for this patient?

Complete discussion of all the treatment options for every dysrhythmia is beyond the scope of this discussion.

Sinus tachycardia should be treated by identification and correction of the underlying cause (e.g., hypovolemia, hypoxemia, anemia, pain, side-effect of medication). In the absence of a treatable cause in a patient at risk for developing ischemia from the tachycardia, a trial of β-blocker administration may be warranted. A short-acting agent such as esmolol should be used so that the therapy may be rapidly stopped if side-effects, such as hypotension, supervene.

In patients who develop new-onset atrial fibrillation or flutter complicated by significant hypotension, congestive heart failure, or ischemia, synchronized cardioversion start-ing at 100 joules (J) (50 for flutter) is the therapy of choice. 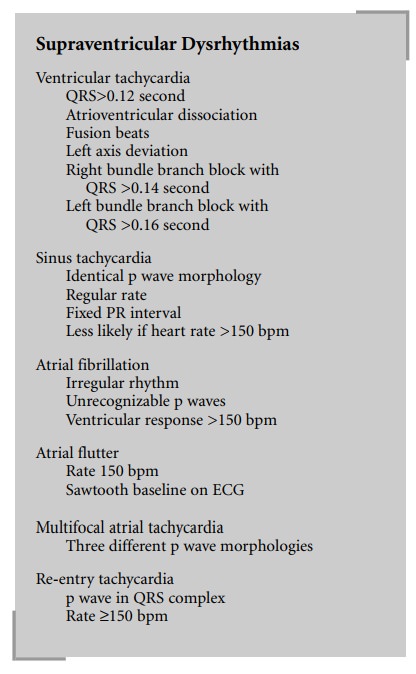 In the absence of such life-threatening side-effects, chemi-cal conversion to sinus rhythm may be accomplished with:

·  Calcium-channel blockers: Diltiazem, 5–10 mg IV q5 min up to 30 mg, is usually preferred over verapamil, 5 mg IV, because it is less of a negative inotrope.

·  Digoxin: 0.5 mg IV, then 0.25 mg IV q6h × 2; additional 0.25 mg doses can be given if the rate is not controlled. It is effective in controlling the rate, but equivalent to placebo for conversion to sinus rhythm. Digoxin will generally require a minimum of 30 minutes to have an effect but it is hemodynamically well tolerated. The other agents will act within minutes of administration but may cause hypotension.

Re-entry (“paroxysmal supraventricular”) tachycardia is treated like atrial flutter but will more often convert to sinus rhythm when treated with intravenous diltiazem. Intravenous adenosine (6 mg IV push, then 12 mg up to 2 times) may also be used, but because of its very short half-life, the rhythm may quickly revert to the re-entry tachycardia.

Multifocal atrial tachycardia usually results from a primary respiratory problem such as decompensated chronic obstructive pulmonary disease. Treatment should be aimed at the underlying cause, most often hypoxemia and/or hypokalemia, although rate control can sometimes be achieved by administration of intravenous diltiazem or β-blockers.

Unstable patients with ventricular tachycardia should immediately be cardioverted (start with 100 Joules), whereas stable patients should be given intravenous amiodarone (150 mg IV infusion over 10 minutes). Wide complex dysrhythmias that cannot be clearly identified as aberrantly conducted supraventricular dysrhythmias should not be treated with calcium-channel blockers because these can lead to intractable cardiac arrest if given to patients with ventricular tachycardia. In this context, adenosine given for diagnostic purposes is no longer recommended. Untreated ventricular tachycardia will usually deteriorate into ven-tricular fibrillation, which should be immediately treated with DC defibrillation starting with 200 Joules. If a defib-rillator is not immediately available, a precordial thump can be used in an attempt to restore sinus rhythm. If this fails, cardiopulmonary resuscitation (CPR) should be initi-ated until defibrillation is possible.

Remember to avoid calcium-channel blockers (as well as adenosine) in patients with pre-excitation syndromes such as Wolff-Parkinson-White syndrome who develop atrial fibrillation, because of the risk of increased conduc-tion through the accessory pathway causing ventricular fibrillation. 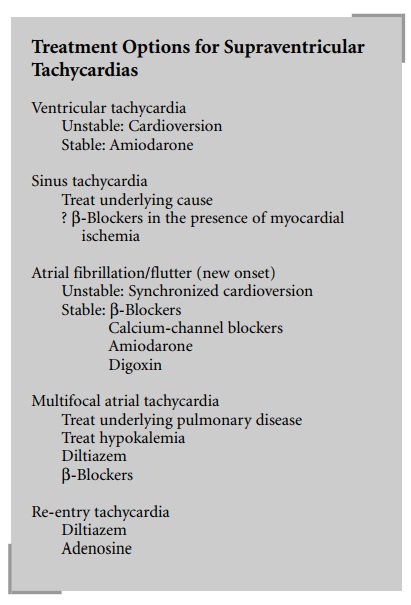 Study Material, Lecturing Notes, Assignment, Reference, Wiki description explanation, brief detail
Clinical Cases in Anesthesia : Shock : What are the treatment options for each of the discussed dysrhythmias? What would you do for this patient? |