Bradycardia is said to exist when the heart rate is less than 60 beats per minute.

Bradycardia is said to exist when the heart rate is less than 60 beats per minute. Bradydysrhythmias are usually noncardiogenic in etiology, reflecting stimuli such as increased vagal tone, drug side-effects, hypoxemia, and hypercarbia. The bradycardia may be either a sinus brady-cardia, which is almost always benign, junctional rhythm, or second- and third-degree atrioventricular blocks, which require a greater sophistication in diagnosis and management.

Sinus bradycardia is usually well tolerated in the absence of hypovolemia, systemic vasodilation and myocardial hypocontractility. The treatment for sinus bradycardia is directed at removing the cause. Surgical stimulation that results in increased vagal tone, such as the oculocardiac reflex or peritoneal traction, should be stopped. Medications that cause bradycardia, such as phenylephrine and fentanyl, should be replaced by alterna-tive drugs or combined with a vagolytic drug (e.g., pan-curonium). In the event that removing the stimulus cannot be accomplished or is ineffective and there is a direct hemodynamic consequence of the bradycardia, atropine 0.4–1.0 mg intravenously (IV) or glycopyrrolate in incre-ments of 0.2 mg IV may be administered. Glycopyrrolate may be preferable because it is longer acting and is less likely to induce severe tachycardia. If necessary, a dopamine infusion of 5–10 μg/kg/min can be used to increase the heart rate. Isoproterenol is now rarely used because of the concomitant potent vasodilation that can lead to severe hypotension. As a last resort, transcutaneous or transvenous pacing may be required.

Junctional rhythms are due to decreased automaticity of or damage to the sinus node. Cells further down the path-way leading to the bundle of His take over but with a lower heart rate. The p waves on electrocardiogram (ECG) are morphologically different from those seen on an ECG recorded when the patient was in sinus rhythm. Depending on the level of escape focus, the PR interval can be shortened or the p waves can be seen within the QRS complex. Junctional rhythms are often seen with volatile anesthetics, especially halothane, and after cardiac surgery. They are usually benign and well tolerated, unless the loss of atrial “kick” leads to a significant decrease in cardiac output, as in patients with diastolic dysfunction and impaired ven-tricular filling. Atropine or dopamine can be used to restore sinus node activity. If this fails, atrial or atrioven-tricular (AV) pacing may be necessary.

Second-degree AV block may be further classified into two major groups. Mobitz I (Wenckenbach) block is char-acterized by a progressive increase in the PR interval result-ing in a periodic failure to transmit the atrial impulse. The cause is usually an intrinsic heart disease involving the AV node or digitalis toxicity. Because the AV node is usually supplied by the right coronary artery, this dysrhythmia commonly complicates inferior wall myocardial infarc-tions. It is usually a benign and self-limited problem rarely requiring treatment. Mobitz II AV block originates below the AV node and is characterized by a failure of atrial depo-larization to conduct. This failure to conduct may occur in an unpredictable manner or in a manner characterized by the “dropping” of every other or every third beat, respec-tively termed 2:1 and 3:1 block. Importantly, the PR inter-val for the conducted beats remains constant. Progression to complete heart block is frequent and pacemaker inser-tion is usually necessary. 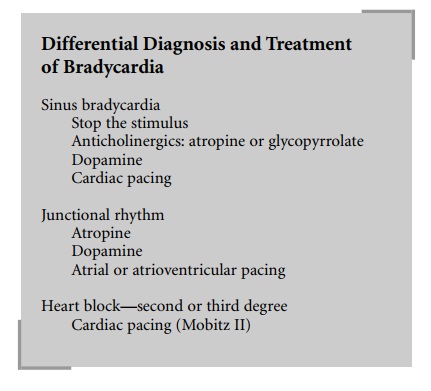