Classification, Properties, Identification and Uses of Salts - What are Salts? | 9th Science : Acids, Bases and Salts

When you say salt, you may think of the white stuff sprinkled on chips, but that is just one kind of salt called as common salt. Seawater contains many salts dissolved in it. Sodium chloride is separated from these salts.

When you say salt, you may think of the white stuff sprinkled on chips, but that is just one kind of salt called as common salt. Seawater contains many salts dissolved in it. Sodium chloride is separated from these salts.

There are many other salts used in other fields. Salts are the products of the reaction between acids and bases. Salts produce positive ions and negative ions when dissolved in water.

A normal salt is obtained by complete neutralization of an acid by a base.

It is derived from the partial replacement of hydrogen ions of an acid by a metal. When a calculated amount of a base is added to a polybasic acid, acid salt is obtained.

Basic salts are formed by the partial replacement of hydroxide ions of a diacidic or triacidic base with an acid radical.

Double salts are formed by the combination of the saturated solution of two simple salts in equimolar ratio followed by crystallization. For example, Potash alum is a mixture of potassium sulphate and aluminium sulphate. 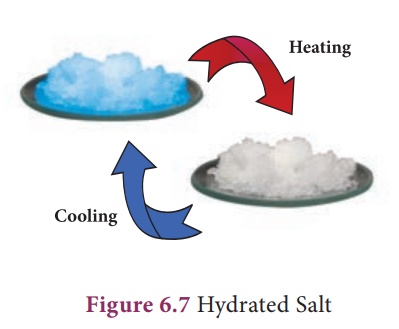 (i) Physical examination of the salt.

The physical examination of the unknown salt involves the study of colour, smell and density. This test is not much reliable.

is test is performed by heating a small amount of salt in a dry test tube. A er all the water get evaporated, the dissolved salts are sedimented in the container.

Certain salts on reacting with concentrated hydrochloric acid (HCl) form their chlorides. The paste of the mixture with con.HCl is introduced into the ame with the help of platinum wire.

(iv) When HCl is added with a carbonate salt, it gives o CO2 gas with brisk e ervescence.

It is used in our daily food and used as a preservative.

i. It is used in softening hard water.

ii. It is used in glass, soap and paper industries.

i. It is used in making of baking powder which is a mixture of baking soda and tartaric acid.

ii. It is used in soda-acid fire extinguishers.

iii. Baking powder is used to make cakes and bread, soft and spongy.

iv. It neutralizes excess acid in the stomach and provides relief.

i. It is used as disinfectant.

ii. It is used in textile industry for bleaching cotton and linen.

i. It is used for plastering bones

ii. It is used for making casts for statues.