Classification, Properties and Uses of Acids, Aquaregia - What are Acids? | 9th Science : Acids, Bases and Salts

Look at the pictures of some of the materials used in our daily life given below: 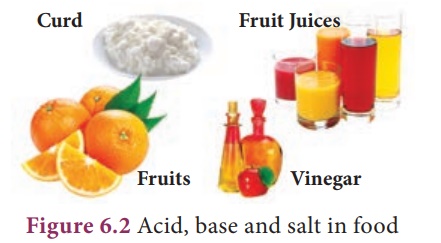 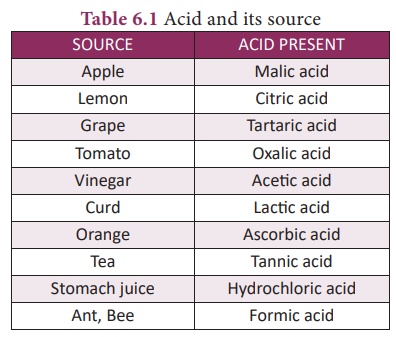 In 1884, a Swedish chemist Svante Arrhenius proposed a theory on acids and bases. According to Arrhenius theory, an acid is a substance which furnishes H+ ions or H3O+ ions in aqueous solution. They contain one or more replaceable hydrogen atoms. For example, when hydrogen chloride is dissolved in water, it gives H+ and Cl- ions in water.

What happens to an acid or a base in water? Do acids produce ions only in aqueous solution?

Hydrogen ions in HCl are produced in the presence of water. The separation of H+ ion from HCl molecules cannot occur in the absence of water.

Thus, hydrogen ions must always be H+ (or) Hydronium (H3O+)

The following table enlists various acids and the ions formed by them in water. 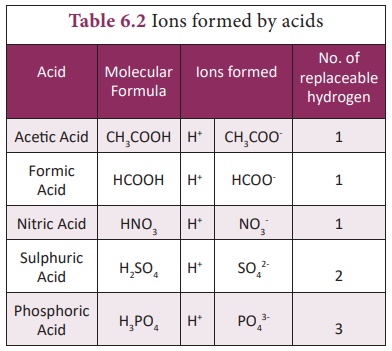 Acids are classified in different ways as follows:

Based on their sources:

Acids prepared from rocks and minerals are inorganic acids or mineral acids.

Based on their Basicity

Acid that contain only one replaceable hydrogen atom per molecule is called monobasic acid. It gives one hydrogen ion per molecule of the acid in solution.

An acid which gives two hydrogen ions per molecule of the acid in solution.

An acid which gives three hydrogen ions per molecule of the acid in solution.

Acids get ionised in water (produce H+ ions) completely or partially. Based on the extent of ionisation acids are classified as follows:

These are acids that ionise completely in water. Example: HCl

These are acids that ionise partially in water. Example: CH3COOH.

It has relatively large amount of acid dissolved in a solvent.

It has relatively smaller amount of acid dissolved in solvent.

a) They have sour taste

b) Their aqueous solutions conduct electricity since they contain ions

d) Acids react with active metals to give hydrogen gas.

f) Acids react with metallic oxides to give salt and water.

g) Acids react with bases to give salt and water.

Role of water in acid solution

Acids show their properties only when dissolved in water. In water, they ionise to form H+ ions which determine the properties of acids. They do not ionise in organic solvents.

For example, when HCl is dissolved in water it produces H+ ions and Cl- ions whereas in organic solvent like ethanol they do not ionise and remain as molecule. 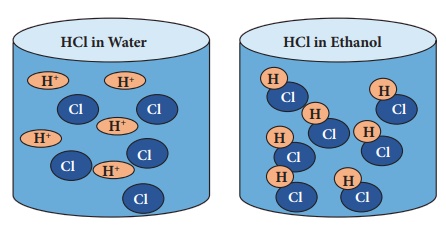 ·           Sulphuric acid is called King of Chemicals because it is used in the preparation of many other compounds. It is used in car batteries also.

·           Citric acid is used in the preparation of effervescent salts and as a food preservative.

·           Nitric acid is used in the manufacture of fertilizers, dyes, paints and drugs.

·           Oxalic acid is used to clean iron and manganese deposits from quartz crystals. It is also used as bleach for wood and removing black stains.

We know that metals like gold and silver are not reactive with either HCl or HNO3. But the mixture of these two acids can dissolve gold. This mixture is called Aquaregia. It is a mixture of hydrochloric acid and nitric acid prepared optimally in a molar ratio of 3:1. It is a yellow-orange fuming liquid. It is a highly corrosive liquid, able to attack gold and other resistant substances.

Solubility in Water : Miscible in water

The term aquaregia is a Latin phrase meaning “King’s Water”. The name reflects the ability of aquaregia to dissolve the noble metals such as gold, platinum and palladium.

1. It is used chiefly to dissolve metals such as gold and platinum.

2. It is used for cleaning and refining gold.