Fungi constitute a group of heterotrophic organisms, which contain no chloro-phyll and are historically compared to plants.

Fungi constitute a group of heterotrophic organisms, which contain no chloro-phyll and are historically compared to plants. They are usually filamentous and multicellular, although some are non-filamentous and unicellular. The fila-ments known as hyphae (sing. hypha) constitute the body of a fungus. These filaments elongate by apical growth (growth is active at hyphal tips), in con-trast to intercallary growth of other filamentous organisms. The hyphae are ei-ther septate (divided by cross walls) or non-septate(coenocytic, without cross walls) (Fig. 4-1). They branch successively behind the tips, resulting in a net-work of hyphae calledmycelium (pl. mycelia). 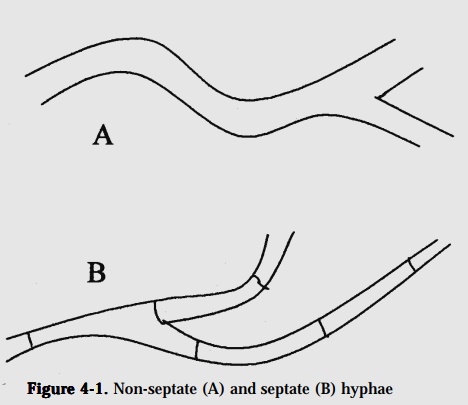 Most parts of the fungal body (also known as soma or thallus) are potentially capable of growth. A minute fragment from most parts of the organism is able to produce a new growing point, and to start a new individual. In general, fungi reproduce by both asexual and sexual means (Fig. 4-2), producing different kinds of spores as end products. The reproductive structures are usually differ-entiated from the somatic structures. They occur in a variety of forms, which are usually the basis for classifying different species. 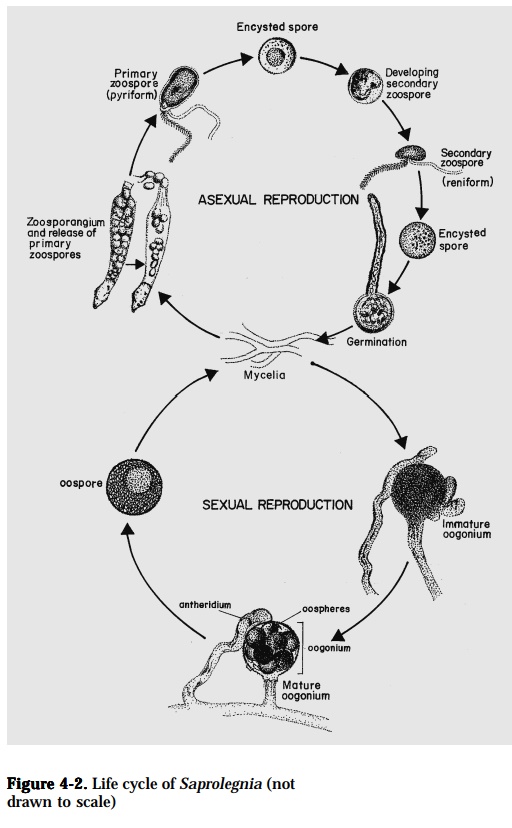 Fungal cell walls are primarily made up of chitin. This characteristic is one of the basis for separating lower fungi (also known as zoosporic fungi) into an-other kingdom – Kingdom Stramenopila; as the cell wall of this group of organisms is made up primarily of cellulose. Lower fungi are now referred to as stramenopiles or straminipilous organisms. This group of zoosporic organisms causes most fungal diseases of aquatic animals.

As heterotrophs, fungi exhibit absorptive nutrition. They have a remarkable ability to utilize almost any carbon source as food. Many fungi are saprobes (saprotrophs), which obtain their food from dead or decaying organic matter. On the other hand, a con-siderable number of species live as parasites of plants, animals, and in some cases, even other fungi. Majority of fungi are also capable of living on dead organic materials, as shown by their ability to grow on synthetic media. These organisms are known as facultative parasitesor facultative saprobes. Thereare some parasitic species, which cannot be cultured in synthetic media, referred to as obligate parasites or biotrophs. Still others can form mutualistic rela-tionships with either animal or plant host.

a)  placing of appropriate substrate on a more or less selective medium supple-mented with antibiotics to inhibit bacterial growth; and,

b)  baiting water with selective substrate such as pollen, insect exuviae, and cellulose.

Freshwater oomycetes (e.g. Saprolegnia and Achlya) are readily isolated by baiting pond waters, and from fish with fungal infection. Holocarpic oomycetes such as Lagenidium callinectes and Haliphthoros milfordensis, which are facul-tative parasites of eggs and larvae of marine crustaceans, may also be isolated with a bit more effort and at the appropriate season, when female crabs and shrimps are carrying eggs.

Isolation of pathogenic oomycetes is usually done by inoculating infected tissues into a suitable medium. Using this method, the inoculated medium needs to be observed for fungal growth within a week (sometimes after 24 to 48 h) to facilitate subculture and identification. Isolation using baits may stand for sev-eral weeks without being overgrown by contaminants.

Identification of fungal pathogens are usually based on the fruiting bodies (zoosporangia or conidia) produced by the organism, either on the infected tissues or from axenic cultures. Hyphae of straminipilous organisms are usually wide, hyaline, and non-septate, while those of the higher fungi are thin and septate.