Sudden onset of mortalities in larval stages of shrimps and crabs. Crab eggs are also susceptible for mycotic infection.

Sudden onset of mortalities in larval stages of shrimps and crabs. Crab eggs are also susceptible for mycotic infection. The commonly affected larval stages among shrimp species are the protozoeal and mysis stages.

Progressive systemic mycosis that is accompanied by little or no host inflamma-tory response can be observed. Infection is apparently lethal, accumulating mortality of 20-100% within 48-72 h after onset of infection.

Microscopic examination of affected larvae will reveal extensive, non-septate, highly branched fungal mycelia throughout the body and appendages (Fig. 4-5). Specialized hyphae or discharge tubes, with or without terminal vesicles, may be present, and could be the basis for identification of the caus-ative agent. Motile zoospores may be observed being released from the dis-charge tubes in the case of some species. Classification of the type of organism causing particular epizootic of larval mycosis is dependent upon the micro-scopic examination of sporogenesis as follows: 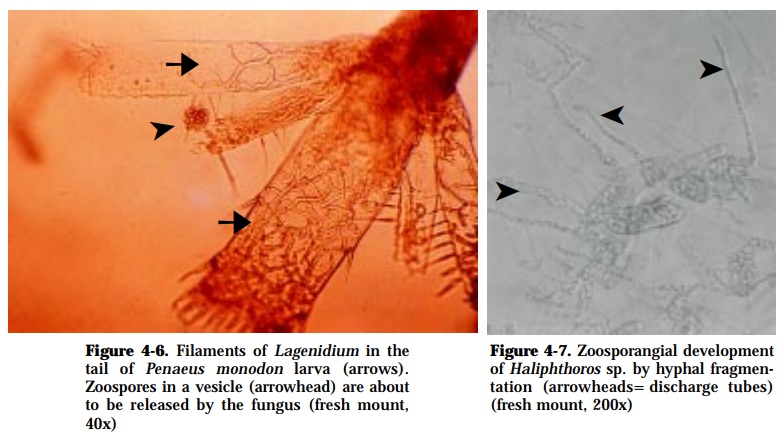 Disinfection of contaminated larval rearing tanks and chlorination and/or filtra-tion of the incoming water can prevent outbreaks. Different antimycotic com-pounds have been tested in vitro. Recommended chemicals for therapeutic and prophylactic treatments include the following: