Aphanomyces invadans is associated with the disease outbreak together with rhabdovirus and the bacteria Aeromonas hydrophila.

Aphanomyces invadans is associated with the disease outbreak together with rhabdovirus and the bacteria Aeromonas hydrophila(Lio-Po 1988).  Other straminipilous organisms that may superinfect

Early signs observed among affected fish are: darker discoloration and loss of appetite; fish floats just below the water surface, or in some species, with the head just breaking the water surface; occasionally, fish may be hyperactive

with a very jerky movement. Ulcerative lesions can be observed throughout the body, which may vary from small areas of rosacea occasionally on the side of the jaw or head, to larger, deep, ulcerative lesions found anywhere on the body.

Fish affected by the disease become lethargic (inactive or comatose in later stages). Advanced stage of the disease often results in exposed head and bone tissues, visceral organs, and vertebral column. Total erosion of the tail is also common. There is severe hydration problem. Histopathologically, massive infiltration of the muscle tissues by the fungus (Fig. 4-4) accompanied by severe tissue necrosis and minimal inflammatory response can be observed. Fungal hyphae may reach the cranium, kidney, and spinal cord. 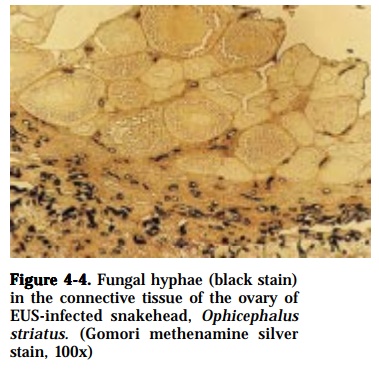 Outbreaks occur at certain times of the year, normally after flooding followed by cool weather (usually from December until February). Presence of mycotic granulomas which can spread throughout the le-sions and also affect some internal organs.Isolation ofA. invadans from internal tissues.

Since EUS mostly occurs among wild fish stocks, it can be very difficult to con-trol outbreaks within a local area. Therefore, where EUS is not endemic, the most effective means of control would be to prevent entry of any infected fish into the area.

For areas where EUS is presently considered endemic, prevention program should include:

•      Eradication of the causative agent (e.g. fungi) by removal of all fish from ponds, reservoirs and water channels prior to restocking; drying-out and liming of ponds; and disinfection of contaminated equipment.

•      Once the causative agent has been eradicated from an affected site, reintro-duction should be prevented.

•      Farming of EUS-resistant fish species (e.g. tilapia) would also be effective in preventing the occurrence of the disease.

Potentially useful treatments for the causative fungus include: