Chapter: Nutrition and Diet Therapy: Diet During Pregnancy and Lactation

Weight gain during pregnancy is natural and necessary for the infant to develop normally and the mother to retain her health.

Weight gain during pregnancy is natural and necessary for the infant to develop normally and the mother to retain her health. In addition to the developing in-fant, the mother’s uterus, breasts, placenta, blood volume, body fluids, and fat must all increase to accommodate the infant’s needs (Table 11-1). 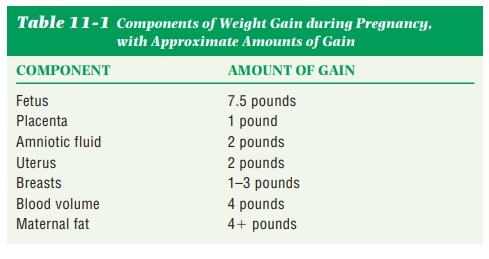 Weight gain varies, of course. A pregnant adolescent who is still growing should gain more weight than a mature woman of the same size. Underweight women should gain 28 to 40 pounds. Women of average weight should avoid excessive weight gain and try to stay within the 25- to 35-pound average gain. If the woman is pregnant with twins, then the recommended weight gain is 35 to 45 pounds. Overweight women can afford to gain less than the average woman, but not less than 15 pounds.

No one should lose weight during pregnancy, because it could cause nutrient deficiencies for both mother and infant. On average, a pregnant adult requires no additional calories during the first trimester of pregnancy and only an additional 300 calories a day during the second and third trimesters.