The weather map is a symbolic representation of the atmospheric conditions of an area at a given time.

The weather map is a symbolic representation of the atmospheric conditions of an area at a given time. On a weather map, you will find isobars and symbols related to pressure, direction and velocity of winds, clouds, precipitation and sea condition on a base map with political boundaries. These details are recorded at different weather stations at specified time.

Meteorological Departments forecast weather conditions by evaluating these weather elements shown on a weather map. This weather map is used in predicting weather conditions for a day, a week or a month in advance, which helps in taking precautions and safety measures. Weather forecasts help farmers, fishermen and crew of ships. It also helps air flights in predicting atmospheric condition a few hours ahead.

Weather maps are the collection of weather information from various meteorological stations pertaining to the particular map area. 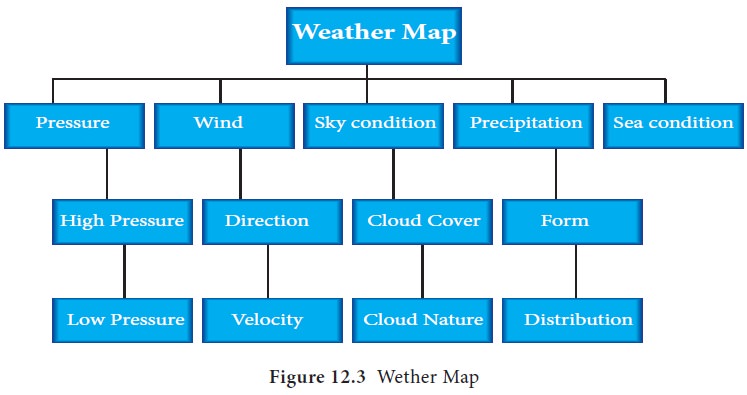 Weather map interpretation includes study and interpretation of all the weather parameters. The given weather map depicts the observed weather conditions on Monday 1st June 1992 at 08.30 Hrs I.S.T (0300 HRS GMT). Generally in India this observation is predicted as the southwest monsoon season that gives rain.

The key elements for weather map interpretation are:

Range of Isobars: From the given weather map it is observed that the isobars range from 1002 mb to 1010mb. The lowest value of 1002 mb is found over Bihar and West Bengal as an enclosed isobar. The 1010 mb is the highest value and is observed in the extreme south western part of the Arabian Sea. 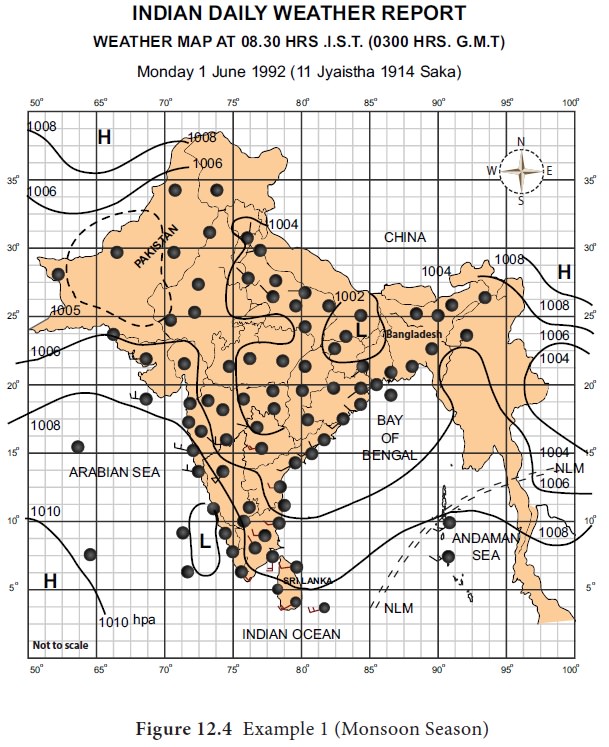 Gradient of Pressure: On this map, the pressure gradient is steep along the western coast of India.

Wind Direction: The wind moves from west to east in the extreme southern part of India, The wind flows from North West to the south east in the rest of the Plateau region. The wind velocity ranges from 5 – 15 knots in most of the places on the given day.

The wind is not strong in North but comparatively strong in south.

Cloud Cover: Clear sky is noticed in the North and north western part of India. Eastern coastal states are partly clouded and the southern states show extreme cloudiness and or overcast.

Precipitation: The rainfall occurred in Assam and Meghalaya because low pressure prevails in near Assam, southern parts of Karnataka, Kerala and Lakshadweep.

Departure of Maximum and Minimum temprature from Normal

Day temperature is above normal in the west, Karnataka and eastern parts of India.

Below normal in the places like northwest India and extend over the adjoining areas.

Conclusion: The general prevalence of the South Westerly winds the location of low pressure over the land and high pressure over the ocean, the occurrence of rainfall over South and eastern part of India. This season is observed as the monsoon season.

b.        High Pressure: Central part of India, the plateau region is marked with High pressure. High pressure also prevails over Gujarat and Rajasthan. The other two high pressure areas are located in Afghanistan (1014mb), to the East of India. The pressure gradient is gentle throughout India.

c.         Wind  Condition:  Calm   weather prevails in north western coast of Orissa. Winds are northern in Tamilnadu, Southerly in Gujarat. In Central India, it is from the northeast. 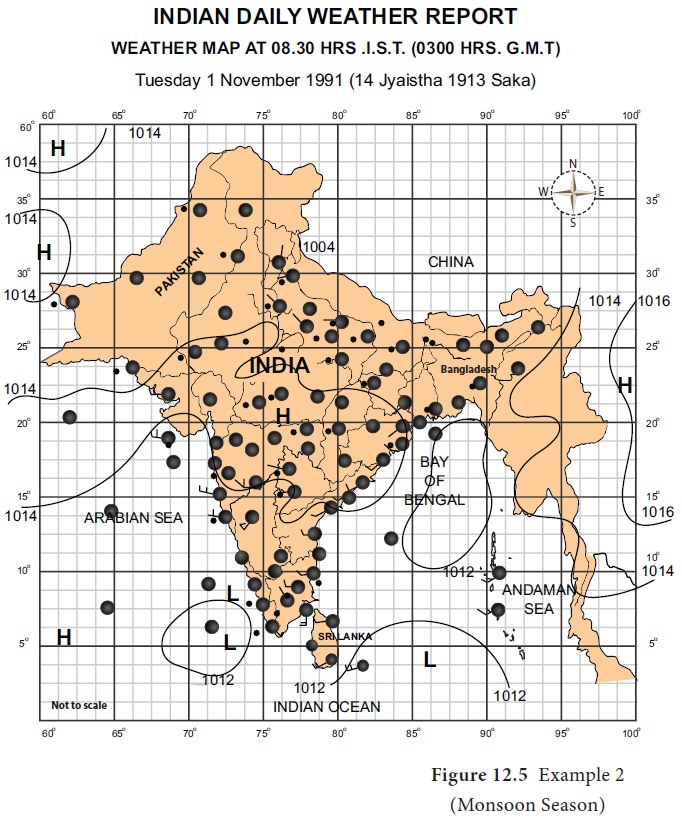 d.        Sky Cover: Sky cover is almost clear in North. In the South, it is partially cloudy. Sea condition is moderate. Haze is found near north eastern part of India.

e.         Precipitation: Rain or thundershowers have occurred at a few places in coastal Andhra Pradesh, Tamil Nadu and South Interior Karnataka at one or two places in Telangana, Rayalasaema and Kerala.