The members of this group are B-complex vitamins and vitamin C .

The members of this group are B-complex vitamins and vitamin C . They are readily soluble in water and can be transported freely in the blood and the watery fluids between the cells. However, vitamin B12 needs a binding protein for the transport. Excess of these vitamins are eliminated via kidneys. Unlike other members of this family the vitamin B12 is eliminated through bile. As these are readily soluble in water these vitamins are easily lost during cooking.

The vitamin B has a group of vitamins (B1, B2, B3, B5, B6, B12, biotin and folate). All these vitamins needs to be converted into the corresponding coenzymes which is their active form. They are useful in the synthesis of many neurotransmitters such as acetylcholine.

i. Vitamin B1 (Thiamine) 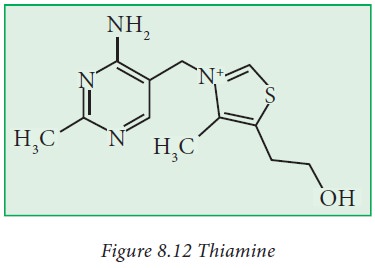 Liver, pork, meat, and rice are rich sources. Other good sources are beans and nuts (Figure 8.13). 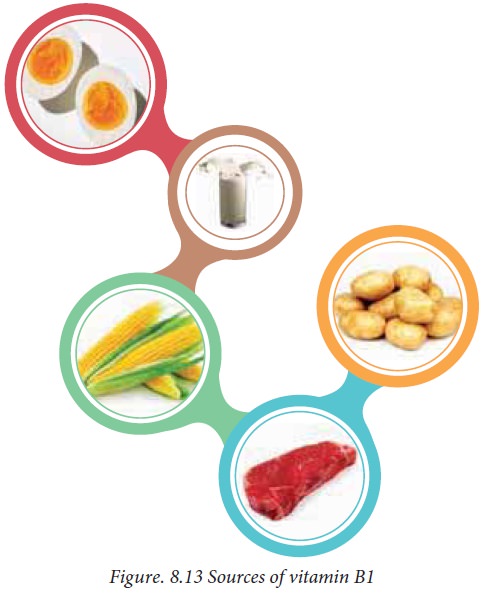 ·     Thiamine act as a coenzyme in the form of thiamine pyrophosphate (TPP) in many enzymatic reactions. These are involved mainly in the breakdown of glucose to yield energy.

·     Thiamine pyrophosphate (TPP) also acts as a coenzyme for transketolase reactions in the phosphogluconate oxidative pathway of carbohydrate metabolism. This reaction is essential for ribose formation, a constituent of DNA and RNA.

·     Vitamin B1 is also required in tryptophan metabolism for the activity of the enzyme tryptophan pyrolase.

Free thiamine is readily absorbed by the small intestine. Thiamine is not stored in the human body. The excess thiamine is excreted in urine and also degraded by the enzyme thiaminase.

The symptoms of thiamine deficiency occur because the tissue cells are unable to receive sufficient energy from glucose. Therefore, they cannot carry out their normal functions. Early symptoms of thiamine deficiency include fatigue, irritability, depression and numbness of the leg and poor tone of the gastrointestinal tract together with constipation.

Beriberi is the disease caused by thiamine deficiency. Beriberi is characterized by oedema in the legs. Usually, beriberi is caused by carbohydrate rich and low thiamine diets such as polished rice. 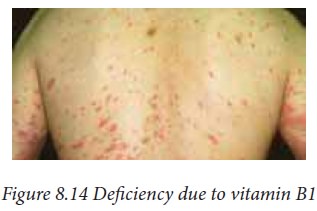 Vitamin B2 which is also known as riboflavin consists of a heterocyclic isoalloxazine ring attached to ribitol (a pentose alcohol). It is a yellow coloured compound. 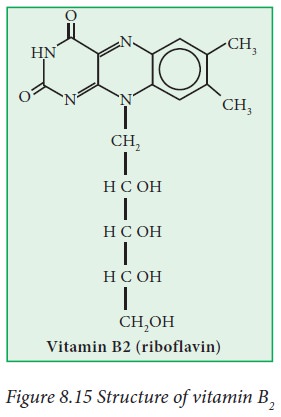 It is widely distributed in plants. Soy beans, green vegetables are good sources of this vitamin. High concentration occurs in yeasts, milk and egg (Figure 8.16). 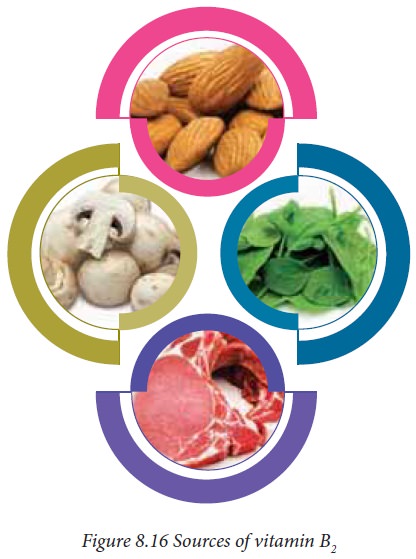 FMN and FAD are synthesized as follows.

FMN and FAD combine with different apoenzymes to form a large number of redox enzymes.

Eg. FMN is associated with the enzyme cytochrome c reductase.

FAD is found in xanthine oxidase and acyl CoA dehydrogenase

Riboflavin is essential for a healthy skin and for good vision in bright light.

The vitamin is phosphorylated in the intestinal mucosa during absorption. It is absorbed by the small intestine through the portal vein and is distributed to all tissues. The major part is excreted in urine and a small part is metabolized in the body.

Riboflavin deficiency leads to cheilosis. It is characterised by the development of fissures developing in the lips and at the corners of the mouth. 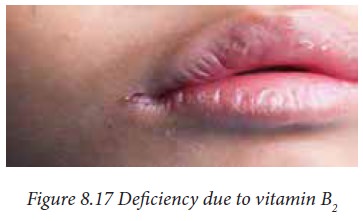 Riboflavin is extremely sensitive to strong light. Due to sensitivity, riboflavin deficiency may occur in new born infants with hyper bilirubinemia who are treated by phototherapy.

Vitamin B3 which is also called as niacin or nicotinic acid is pyridine 3-carboxylic acid.

It occurs in tissues as nicotinamide (Figure 8.18). 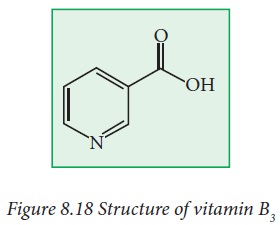 This vitamin is widely distributed in cereals, dark green leafy vegetables. Liver and kidney are rich sources of this vitamin. 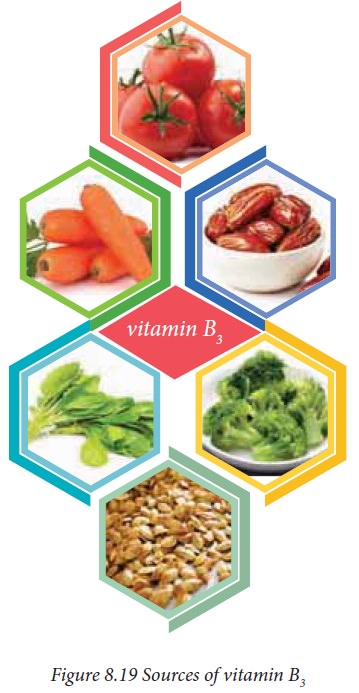 ·     It promotes the formation of fat from carbohydrates.

·     Niacin is essential for healthy skin, normal functions of the gastro intestinal tract and maintenance of the nervous system.

Nicotinic acid and nicotinamide are absorbed by the intestine through the portal vein into the general circulation. Excess nicotinic acid is not stored in the body.

·     Dermatitis-skin exposed to the sun, soreness of the mouth and swelling of the tongue.

·     Dementia-mental changes including depression and confusion.

Vitamin B6 or Pyridoxine is also called as adermin. Vitamin B6 consists of three closely related pyridine derivatives.

The metabolically active form of vitamin B6 is pyridoxal phosphate. It is formed from pyridoxal. 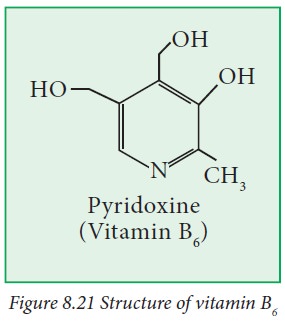 Rich sources of this vitamin are yeast, whole grain, cereals and egg-yolk. Moderate amounts are present in organ meats like liver and kidney. 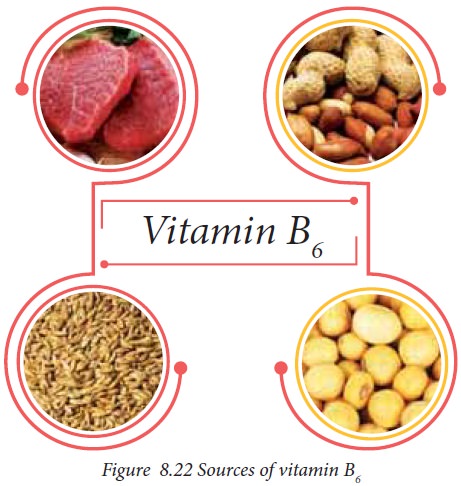 ·     It is involved in the formation of heme in hemoglobin.

·     Pyridoxal phosphate acts as a coenzyme for the decarboxylase in decarboxylation reactions.Amino acids are decarboxylated to form their corresponding amines.

·     Vitamin B6 is involved in the synthesis of coenzyme A from pantothenic acid.

·     It is also involved in the production of antibodies.

Pyridoxine is readily absorbed by the small intestine. The excess amount if ingested is not stored in the body, and is excreted in urine.

Deficiency of vitamin B6 is extremely rare. In infants its deficiency causes irritabilities, insomnia, muscular weakness and convulsion. The cause of the convulsions are severe impairment of the activity of the enzyme glutanate ecarboxylase, which is dependant on pyridoxal phosphate. The product of Glutamate decarboxcylase in γ-aminobutyric acid (GABA), which is a reguletory neurotransmitter in the central nervous system.

Vitamin B12 has complex ring structure, similar to porphyrin ring which has a cobalt ion (Co3+) at its center (Figure. 8.23). The active coenzyme forms of vitamin B12 are methylcobalamine and deoxyadenolsyl cobalamine. The six co-ordination valencies of cobalt ion (Co3+) are satisfied by the four nitrogens of reduced terapyrrole and the fifth by the nitrogen of 5, 6 dimethyl benzimidazole moiety and the sixth one either by CN‒ (cyanocobalamine) 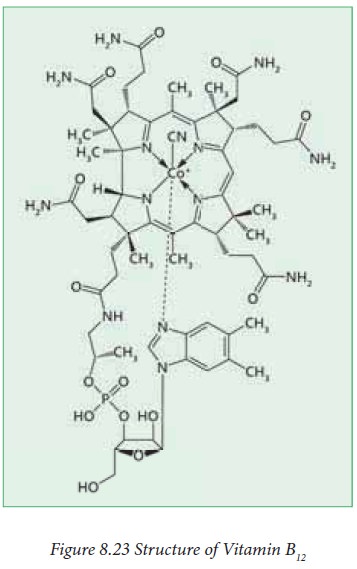 Vitamin B12 is found in animal but not in vegetable foods and is unique in that it is the only known vitamin that holds an ion of metal (cobalt) in its molecule. Eggs and meat supply ample amounts of this vitamin.

·     Many microorganisms require vitamin B12 for growth.

·     Vitamin B12 is required as coenzyme for the conversion of L-methylmalonyl CoA to Succinyl CoA by the enzyme methylmelonyl CoA mutase. This reaction is essential for in the metabolisom of some branched-chain amino acids and odd-chain fatty acids

·     Vitamin B12 is required for the maturation of red blood cells in the bone marrow and for the synthesis of proteins.

Vitamin B12 is absorbed from ileum. For the absorption of vitamin B12 from the intestines, a factor called “Intrinsic Factor” (IF) secreted by the stomach is essential. Vitamin B12 is stored in fair amounts in the liver.

When absorption is prevented by lack of intrinsic factor, it leads to the condition called pernicious anemia. It is characterized by a drastic decrease in red blood cell count and leads to formation of macrocytic red blood cells. 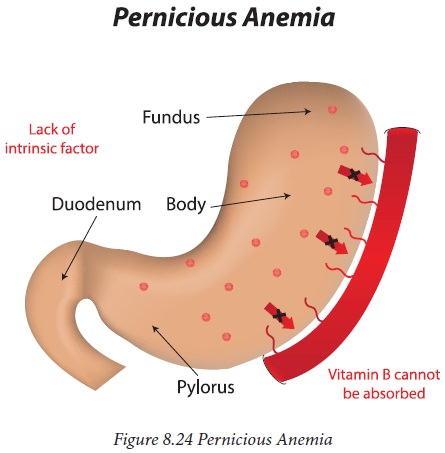 Biotin is a heterocyclic monocarboxylic acid. It is a Sulphur-containing water soluble vitamin. 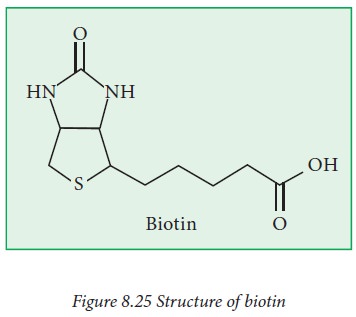 ·     It is essential for the synthesis of lipids.

·     It helps in the conversion of pyruvic acid to oxaloacetic acid. The enzyme that catalyzes this reaction is pyruvate carboxylase.

·     It helps to maintain the skin and the nervous system in good condition.

·     It involves in deamination of certain amino acids like aspartate, serine and threonine. 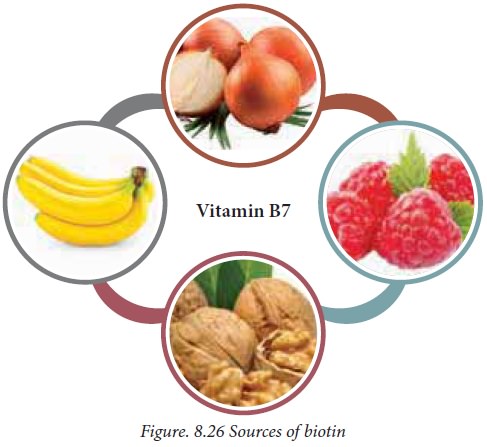 Folic acid otherwise known as vitamin B9, folavin or folate is essential for cell division. Its active coenzyme is tetrahydrofolate (THF). The naturally occuring folate is susceptible to high heat and UV light and also be subject to oxidation.

Folate naturally occurs in a wide variety of foods, including dark green leaf vegetables, fruits, nuts, soybeans, chickpeas, dairy products, poultry and meat, eggs, seafood, grains. Vegetables such as avocado, beetroot, spinach, liver, yeast, asparagus, kale, and brussels and sprouts are among the foods with the highest levels of folate.

·     Folic acid is essential for cell division and growth

·     It is important for preventing birth defects.

·     It is used in the synthesis of amino acid methionine.

·     Tetrahydrofolate (THF) is needed to transfer one carbon units in the biosynthetic reactions.

Folates are absorbed in the small intestine. The body can store a small amount in liver.

The excess is removed from liver via bile.

Folate deficiency signs include anemia (megaloblastic anemia) and dysfunction of the gastrointestinal tract. The anemia is caused by the abnormal blood cell division resulting in fewer and larger red blood cells.

Lack of folate in the diet can cause neural tube defects in an embryo of a pregnant woman. These can cause fatal birth defects.

Pantothenic acid is found in every living cell including plant, animal and microbes. It is a part of coenzyme A which is an essential coenzyme involved in the catabolism of carbohydrates, proteins and fat.

Pantothenic acid is present in dried mushrooms, avocado, dried egg yolks and sunflower seeds in high amounts. Outer layer of whole grains contains the vitamin, but milling removes much of the pantothenic acid.

·     Pantothenic acid forms a part of coenzyme A which is an essential coenzyme for metabolising carbohydrates, fat and proteins.

·     It is necessary to synthesise vitamin D, steroid hormones and red blood cells

·     It also helps to boost the immunity

Pantothenic acid deficiency is very rare and seen only in cases of severe malnutrition. Pantothenic acid is found in many common foods and average diets are thought to have an adequate amount of it.

Vitamin C is called as ascorbic acid. Ascorbic acid is an enediol-lactone of an acid with configuration similar to that of the sugar L-glucose. 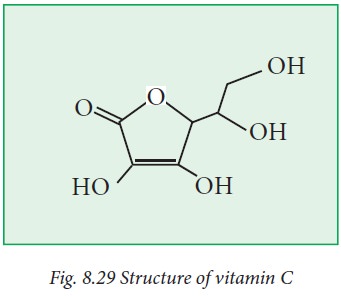 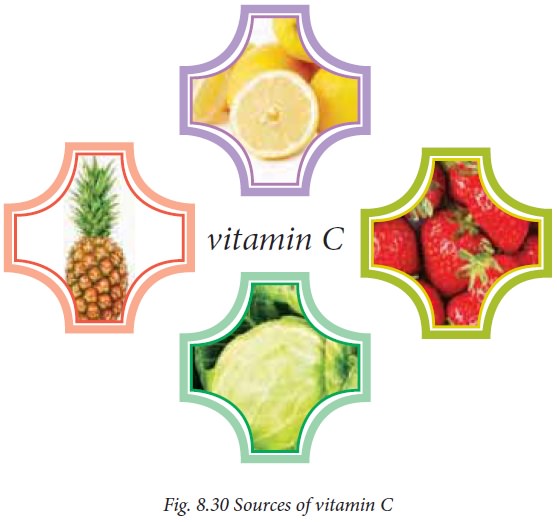 ·     Vitamin C is involved in cellular oxidation-reduction reactions inside the cell as hydrogen carrier.

·     Vitamin C is essential for building collagen, the connective tissue protein which cements the cells and tissues together.

·     Vitamin C is required as coenzyme for the enzyme dopamine hydroxylase which catalyzes the conversion of dopamine to nor-epinephrine.

·     It is involved in the maturation of red blood cells.

·     The absorption of iron is significantly enhanced by the presence of vitamin C.

·     It has a general antioxidant role , especially in the regeneration of oxidized vitamin E in membranes. 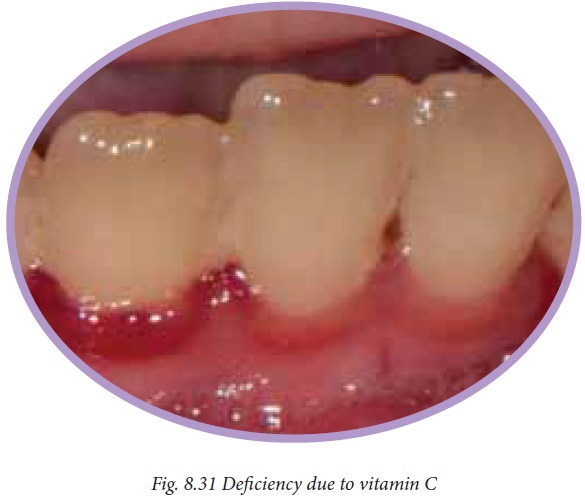 Ascorbic acid is rapidly absorbed from the intestines and passed on through the portal vein to the general circulation. Vitamin C is found in highest concentrations in the adrenals, the pituitary and retina than in circulation. Excessive intake of the vitamin do not increase beyond the optimal levels.

Scurvy is the classical syndrome of vitamin C deficiency. It is related to defective collagen synthesis which is indicated by fragile skin, muscle weakness, bleeding of the gums, loose teeth and delayed wound healing. 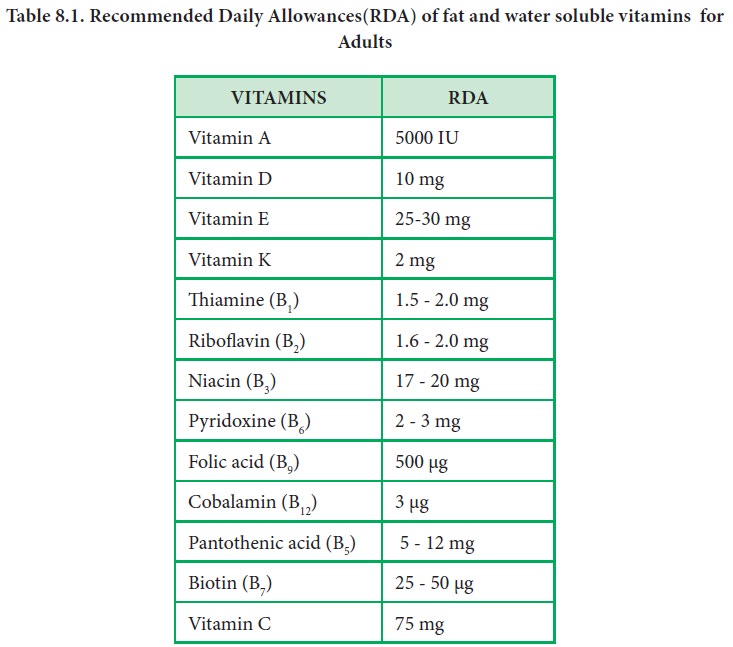