The members of this group are vitamin A, vitamin D, vitamin E and vitamin K.

Vitamin A or Retinol is a poly isoprenoid compound containing a cyclohexenyl ring (Fig. 8.1) . It is found only in foods of animal origin. It is present in almost all species of fish, birds and mammals. The precursor of vitamin A, carotenoid is found in foods of plant origin. The body has the ability to convert carotenoid compound present in the diet into vitamin A. For example beta carotene found in vegetables such as carrot is converted into vitamin A by the symmetrical cleavege by the enzyme β-carotene -15,15’-dioxygenase.

Table 8.1 Comparison of fat and and water soluble vitamins 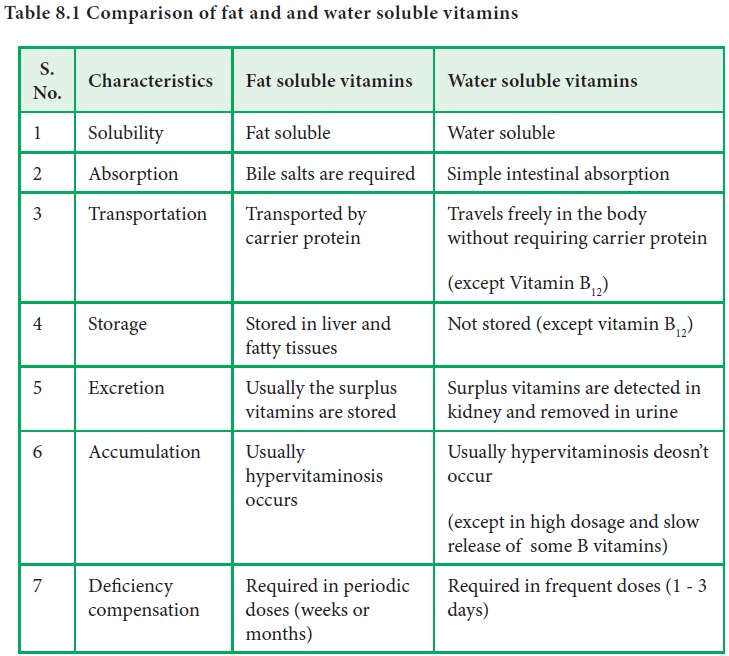 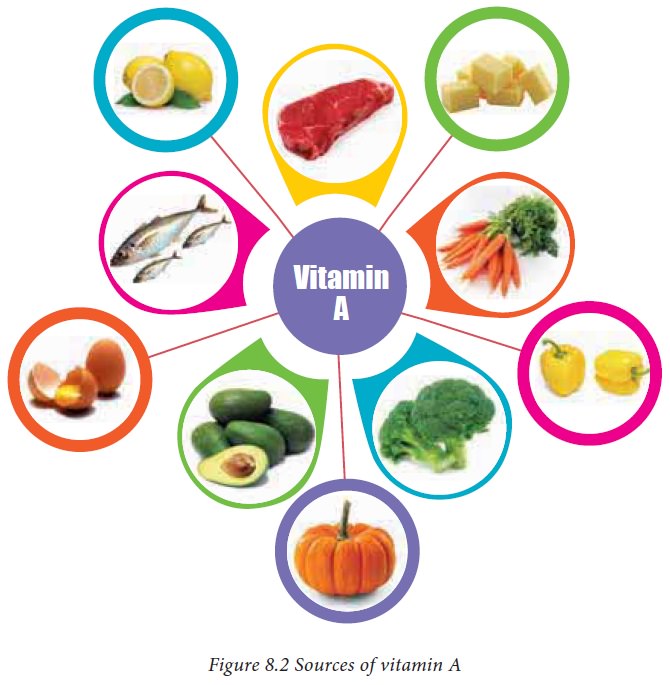 Functions of vitamin A:

·     Vitamin A plays a significant role in the visual cycle (as a component of rhodopsin).

·     It is essential for the normal structure and functions of epithelial tissues.

·     Retionic acid inhibits the enzyme collagenase and thus prevents the breakdown of collagen.

·     Retinoic acid is essential for sulfation of the mucopolysaccharides.

·     It is needed for the formation of bone and teeth.

·     β-carotene is an antioxidant and plays a role in trapping peroxy radicals in tissues.

Vitamin A and carotene are absorbed from the small intestine into the lymphatic system. The maximum absorption is reached after 3 to 5 hours of food consumption. The rate of absorption of vitamin A is more rapid than that of carotene. In the adult healthy human only 3% of β-carotene is converted into vitamin A. About 95% of the vitamin A stored in our body is found in the liver and small amount is present in the lungs, adipose tissue and kidneys.

The earliest sign of vitamin A deficiency is concerned with vision. Initially, there is a loss of sensitivity to green light, followed by impairment to adapt to dim light. This condition leads to night blindness. On prolonged or severe deficiency, ulceration of cornea occurs and this condition is known as xerophthalmia or keratomalacia (Figure 8.3). 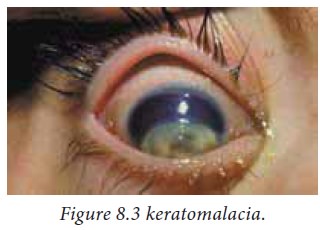 Vitamin D is a sterol compound. It is represented by a group of steroids occuring chiefly in animals, plants and yeast. There are two distinct forms of Vitamin D, namely Vitamin D2 and Vitamin D3. Vitamin D3 is more active than D2.

Vitamin D2 is also known as ergocalciferol. It is produced by the exposure of ergosterol to UV radiation. Ergosterol occurs in plants, milk and yeast.

Vitamin D3 is also known as cholecalciferol. It is the natural form of the vitamin ingested from food. It can also be formed by the exposure of 7-dehydrocholesterol present in the skin to sunlight (UV radiation).

Transformation from inactive provitamin D to the active form is accomplished by exposure to sunlight(UVrays).

·     Vitamin D is required for normal growth in mammals. This is probably related to absorption and utilization of calcium and phosphorous.

·     It helps in the normal development of bone and teeth.

Vitamin D absorption occurs from small intestine. Fat and bile are essential for its absorption. Vitamin D enters into the general circulation via lymph and stored mainly in liver and kidneys. 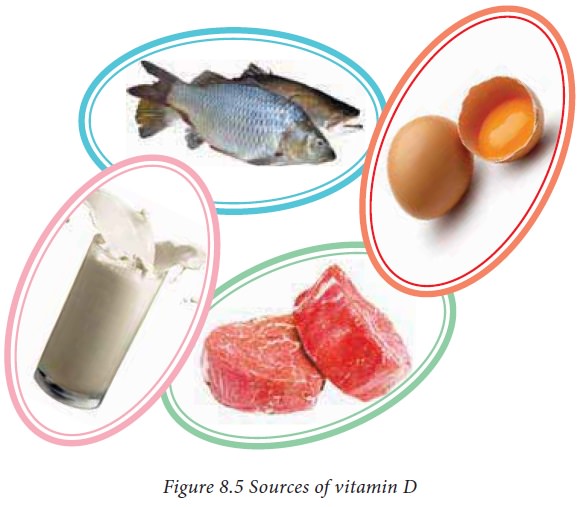 Deficiency of this vitamin causes rickets in growing children and osteomalacia in adults (Fig. 8.6). It is due to softening of bones resulting from lack of calcium and phosphate. 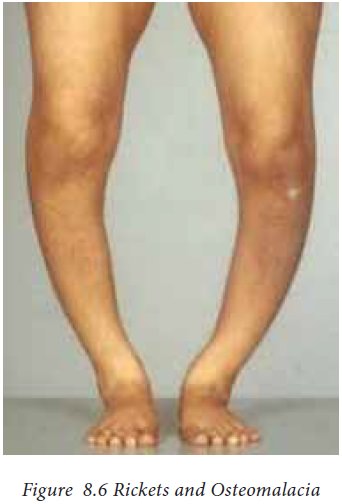 Vitamin D toxicity can occur if one consumes over 10,000 IU per day (1000 IU per day in children) for several months. This causes hypervitaminosis D, which increases the blood calcium levels. This results in bone loss and kidney stones. Long-term overconsumption of vitamin D can cause calcification of organs such as the heart, blood vessels and the kidneys. 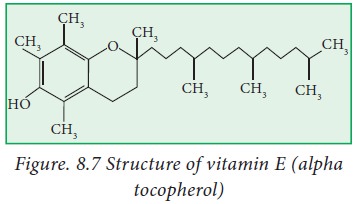 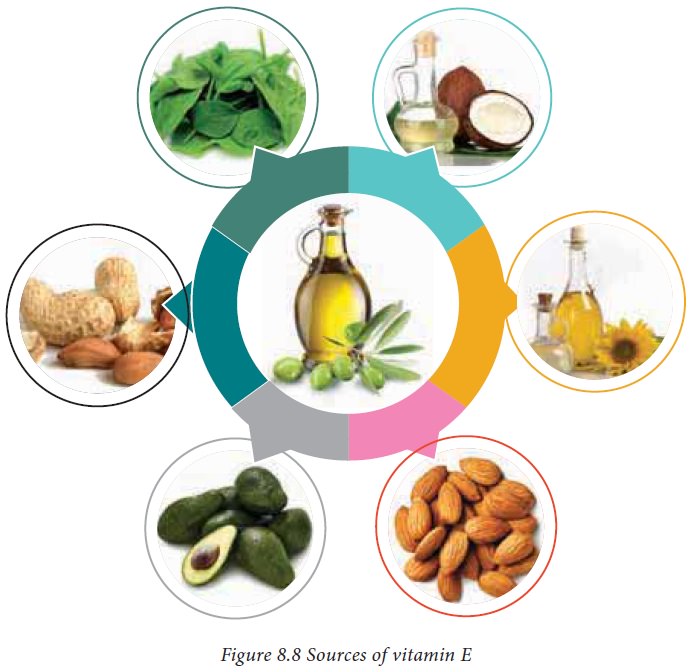 Vitamin E is involved in removal of free radicals and prevents their effects on unsaturated lipids of membrane and thus helps maintain the integrity of cell membrane.

·     It protects the red blood cells against hemolysis.

·     It plays a role in normal functioning of muscles.

·     It plays an important protective role during ageing of cells.

·     Vitamin E is essential for biosynthesis of coenzyme Q.

Vitamin E, like other fat soluble vitamins, is absorbed along with fat in the small intestines. It is stored in the liver, muscle and body fat.

It is known as the anti-hemorrhagic vitamin.

Three compounds which have the biological activity of vitamin K are:

·     Menaquinones, which are a family of closely related compounds synthesized by the intestinal bacteria, with different lengths of the side chain.

·     Menadione, a synthetic compound which can be metabolized to yield phylloquinone. 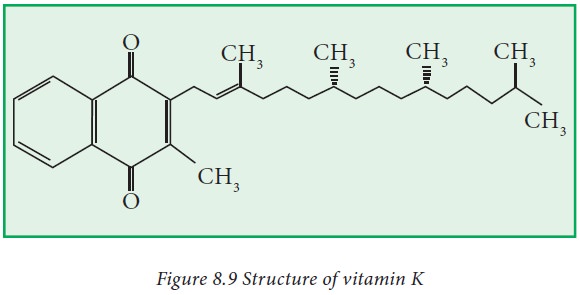 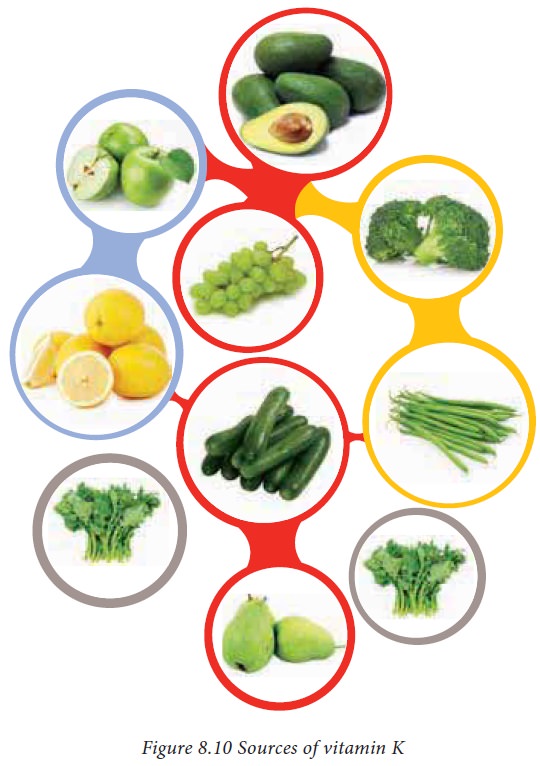 ·     Vitamin K is essential for the synthesis of prothrombin, a substance necessary for blood clotting. That is why it is called as an anti-haemorrhagic vitamin.

·     Vitamin K is needed to carboxylate specific glutamate residues of calcium binding proteins of bones, spleen and kidneys. This enhances the capacity of these proteins to deposit calcium in the tissues concerned.

·     It plays a key role in the respiratory chain mechanism and oxidative phosphorylation.

Absorption occurs in intestine. Being fat-soluble, its absorption is enhanced by sufficient amount of bile salts. mainly in the jejunum by the way of lymphatus. Liver stores appreciable amounts of vitamin K.

·     Deficiency of vitamin K is very rare, as most of the daily foods contain this vitamin. In addition, intestinal flora of micro organisms synthesize adequate quantity of vitamin K.

·     The deficiency of vitamin K leads to a lowering of prothrombin level and increased clotting time of blood. This may lead to hemorrhagic conditions (Figure. 8.11). 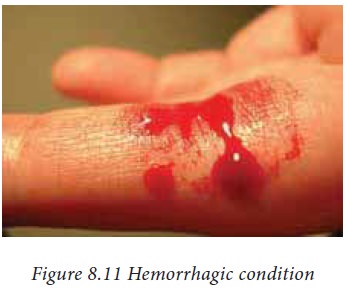