Chapter: Aquaculture Principles and Practices: Selection of Sites for Aquaculture

Water quantity and quality - Selection of Sites for Aquaculture

The availability of water of appropriate quality is important for all systems of aquaculture, but the quantity is particularly important for land-based systems.

The availability of water of appropriate quality is important for all systems of aquaculture, but the quantity is particularly important for land-based systems. It is therefore necessary to investigate, as thoroughly as possible, the extent and seasonality of water sources as well as liability to pollution. Since predictions of long-term water conditions have to be made, it is desirable to have data for a reasonably long period of time. In areas with controlled irrigation, reliability of supplies can generally be expected. This, together with the availability of cheap electricity, has made water management fairly easy for fish farmers in southern China, in spite of dense stocks of fish and heavy loading of manures in pond farms. On the other hand, when rainfed or ground-water ponds are used, as in eastern India, water levels in the ponds become dangerously low due to seepage and evaporation in summer months, when the ponds have generally the maximum biomass of fish. Access to other reliable sources of water, such as rivers, streams, lakes and reservoirs or even tube wells which can yield enough water are essential for the enterprise to succeed. Loss of water due to seepage and evaporation varies considerably. For example, the average loss in Europe is reported to be about 0.4–0.8 cm per day, whereas in tropical regions it may be as much as 2.5 cm per day. When ground water is the major source of water supply, the effect of pumping on the water table and possible land subsidence have to be considered.

The need to investigate the elevation and ranges of tides for coastal aquaculture has already been referred to. This is most important when tidal movements have to be depended on for filling and draining the ponds. The constant flushing of newly constructed ponds to leach out toxic elements from the soil has also been mentioned. It is believed that if pumping were to be used for water management, the costs of construction of dikes and sluice gates would be minimized and the ponds could be constructed and operated without disturbing the acid soils, allowing a non-acidic layer of sediment to deposit on the bottom. In the long run, this may be more economical, despite the increased energy costs. However,it will be necessary to make rough calculations of the comparative costs before finally selecting the site and deciding on the system of management to be adopted.

The temperature of the water will be an important criterion when deciding whether the species selected can be cultured on the site. Although in hatcheries and in systems with a recirculating water supply the temperature can be controlled, it is extremely difficult, if not impossible, to do so at an affordable cost in large pond farms. Industrial waste heat can to a certain extent be used to raise temperatures in aquaculture areas, but very often practical problems of quality of heated water or irregularity in availability limits its use, except in well-controlled environments or where the animals can stand considerable variations in temperature.

Salinity and variations thereof are also important environmental factors which have tobe taken into account. Some species have wide salinity tolerance limits and it has been noted that some fresh-water fish grow faster in slightly saline water and some brackish-water fish faster in fresh water. However, they still have their limits of tolerance. Even if they survive, their growth and reproduction may be affected. For example, the common carp (Cyprinuscarpio) can grow well in salinities up to 5 ppt,but at 11.5 ppt the salinity becomes lethal. Similarly, the tiger shrimp (Penaeus monodon) can tolerate 0.2 to 0.4 ppt salinity, but grows well only between 10 and 25 ppt.

As will be discussed, salinity and water temperature are important considerations in deciding on the sites for hatcheries. Not only do these require higher water quality but the levels of salinity and water temperature required for spawning and larval rearing may differ from those needed for grow-out to market size. This may sometimes make it necessary to select separate sites for hatcheries and growout farms for certain species.

High turbidity of water caused by suspended solids can affect productivity and fish life. It will decrease light penetration into the water and thus reduce primary production. This would naturally also affect secondary production. In certain cases, oxygen deficiency has also been reported as a result of a sudden increase in turbidity. The suspended solids may clog the filter-feeding apparatus and digestive organs of planktonic organisms. The gills of fish may be injured by turbid water.Although the effect will depend on the species and the nature of the suspended matter, pronounced effects are seen when the water contains about 4 per cent by volume of solids. The use of turbid water in hatcheries should be avoided, as it can greatly affect the hatching and rearing of larvae.

If it becomes necessary to select sites with highly turbid water, which the candidate species cannot tolerate, suitable methods of reducing turbidity have to be adopted. The use of settling tanks, different types of filters and repeated application of gypsum (200 kg per 1000 m3 initially, followed if necessary by an additional application of 50 g per 1000 m3) have been recommended. All these will involve higher capital or operational cost, but in cases where there are no alternatives the possibility of absorbing the costs will have to be examined in feasibility

studies. Improvements in drainage from catchment areas, often the cause of high turbidity, may also be considered.

Among other water-quality criteria of importance in site selection are acidity and alkalinity. The most suitable pH of water for aquaculture farms is considered to lie in the range 6.7–8.6 and values above or below this inhibit growth and production, although the extent of their effect will depend on the species concerned and environmental conditions such as the concentration of carbon dioxide or the presence of heavy metals such as iron.

The prevalence of low pH in brackish-water areas and the problems of improving soil and water quality in farms built in such areas have been described earlier. Water of low pH is also common in fresh-water areas with soils low in calcium and rich in humic acids. Acid water with a pH range of 5.0–5.5 can be harmful to the eggs and fry of most fish and the adults of many. Acidity reduces the rate of decomposition of organic matter and inhibits nitrogen fixation, thereby affecting the overall productivity.

The most common method of correcting low pH is by liming to neutralize the acidity. The dose will depend on the pH value and the chemical composition of the water, especially the concentration of calcium bicarbonate [Ca(HCO3)2]. It will also depend on the type of lime applied. The relative quantities of quick lime (calcium oxide, CaO), slaked lime or agricultural lime (calcium hydroxide, Ca(OH)2) and limestone (calcium carbonate, CaCO3) required will be in proportions of 1 : 1.5 : 2 respectively. The actual dosage has to be determined by titrating the water to neutrality and calculating the equivalent amount of lime to be added. The additional costs involved will have to be taken into account before selecting sites with acid water.

High pH, indicating excessive alkalinity, can also be harmful. However, it should be noted that in productive water pH may reach higher values of 9 to 10 due to the uptake of carbon dioxide during photosynthesis in the daily pH cycle. This is why it will be better to take pH measurements before daybreak to determine suitability for aquaculture. A pH level of 11 may be lethal to fish.

Toxic substances in water supplies can affect aquaculture, particularly in hatcheriesLiebmann (1960) summarizes the threshold levels of toxicity and maximum permissible concentration of toxic substances in indoor fish hatcheries, as shown in Table 4.2. 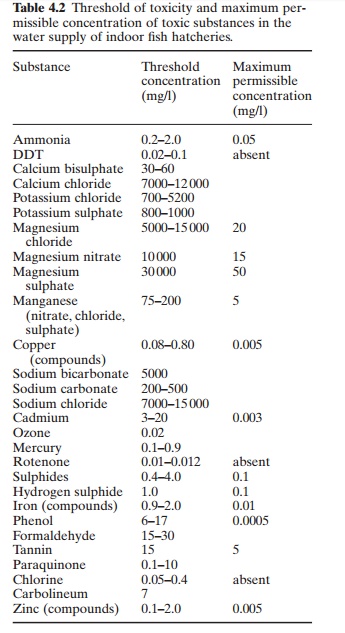