Chapter: 12th English : UNIT 5 : Prose : The Status of Tamil as a Classical Language

A comparison of one thing with another thing that has similar features is known as analogy. In an analogy, the last two words must be related in the same manner in which the first two are related.

felicitation   : congratulation ADULATION is the synonym of APPRECIATION,

similarly congratulation  is the synonym of felicitation.

Here are some analogies formed with words selected from the lesson you have just read.

Now complete each analogy with appropriate words from the list given below: 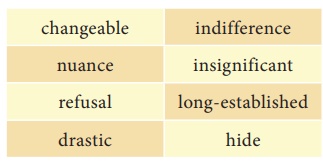 In the letter of Prof. George L Hart, we come across the words ‘linguistics’, and ‘aesthetics’ .The suffix ‘- ics’ means ‘pertaining to’ or ‘ relating to’. The word ‘linguistics’ means the scientific study of a language.

Match the –ics words with their appropriate meanings. You can make use of a dictionary. 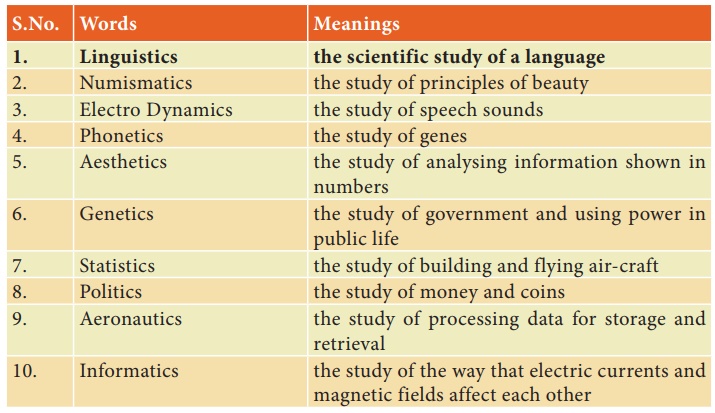 1. Linguistics :  the scientific study of a language

2. Numismatics : the study of money and coins

3. Electro Dynamics : the study of the way that electric currents and magnetic fields affect each other

4. Phonetics : the study of speech sounds

5. Aesthetics : the study of principles of beauty

6. Genetics : the study of genes

7. Statistics : the study of analysing information shown in numbers

8. Politics : the study of government and using power in public life

9. Aeronautics : the study of building and flying air-craft

10. Informatics : the study of processing data for storage and retrieval

“The greatest works of ancient Tamil, the Sangam anthologies and the Pattupattu, date to the first two centuries of the current era”.

Note: In the above sentence, the words ‘to’ and ‘two’ sound the same but they have different meaning.

Complete the following with appropriate words from the box given.

1  My mother brought an expensive watch as a birthday present

2  Everybody accepted the fact that overeating could easily  lead to obesity.

3  In the middle ages, people were trained to become a knight at a young age.

4  Akshitha´s brother plays the bugle in his school band .

5  The weather is fine and the air is filled with the boughs of lemons.

6  What a splendid regin the emperor Alexander’s might have been!

7  Humans have foot, animals have paws.

8  They know how to sell their mobile phones online.

9  The teacher is so happy that all the students are present today.

10  The cars were banned in the traffic jam.

11  It is not easy for him to tie bows in his shoe laces.

Collocation: It is a pair or group of words that always appears in the same order. Here are some collocations picked from the lesson:

Some of the commonly used collocations are:

Go through the letter of Prof. George L Hart once again and enlist the words describing Tamil.

Identify the words that mean the following.

1  This is something that is related to ancient time antiquity

2  The word that describes pleasing in appearance aesthetics

3  Things that are not specifically religious secular

4  The word to mention a large number myriad

6  The thing that cannot be described indescribable

8 The quality of existing or involving everywhere universality