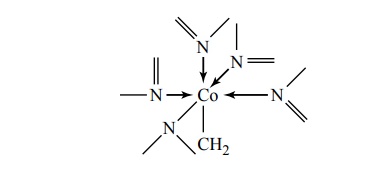 Note that this prosthetic group contains cobalt, which has bonds similar to those of iron in the hemoglobin molecule. It is likely that the cobalt atom functions in much the same way that the iron atom functions to combine reversibly with other substances.

Vitamin B12 Deficiency Causes Pernicious Anemia. Vitamin B12performs several metabolic functions, acting as a hydro-gen acceptor coenzyme. Its most important function is to act as a coenzyme for reducing ribonucleotides to deoxyribonucleotides, a step that is necessary in the replication of genes. This could explain the major func-tions of vitamin B12: (1) promotion of growth and (2) promotion of red blood cell formation and maturation. This red cell function is described in detail in relation to pernicious anemia, a type of anemia caused by failure of red blood cell maturation when vitamin B12 is deficient.

Vitamin B12  Deficiency Causes Demyelination of the Large Nerve Fibers of the Spinal Cord. The demyelination of nervefibers in people with vitamin B12 deficiency occurs espe-cially in the posterior columns, and occasionally the lateral columns, of the spinal cord. As a result, many people with pernicious anemia have loss of peripheral sensation and, in severe cases, even become paralyzed.

The usual cause of vitamin B12 deficiency is not lack of this vitamin in the food but deficiency of formation of intrinsic factor, which is normally secreted by the parietal cells of the gastric glands and is essential for absorption of vitamin B12 by the ileal mucosa.