When a person is driven by hunger to eat voraciously and rapidly, what turns off the eating when he or she has eaten enough? There has not been enough time for changes in the body’s energy stores to occur, and it takes hours for enough nutritional factors to be absorbed into the blood to cause the necessary inhibi-tion of eating. Yet it is important that the person not overeat and that he or she eat an amount of food that approximates nutritional needs. The following are several types of rapid feedback signals that are impor-tant for these purposes.

Gastrointestinal Filling Inhibits Feeding. When the gas-trointestinal tract becomes distended, especially the stomach and the duodenum, stretch inhibitory signals are transmitted mainly by way of the vagi to suppress the feeding center, thereby reducing the desire for food (Fig. 71–1). 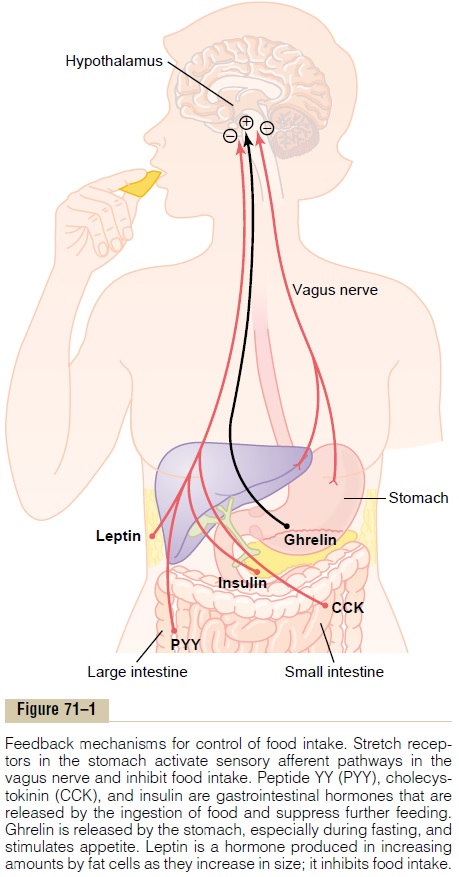 Gastrointestinal Hormonal Factors Suppress Feeding. Chole-cystokinin is released mainly in response to fat enter-ing the duodenum and has a direct effect on the feeding centers to reduce subsequent eating. Studies in experimental animals suggest that CCK may decrease feeding mainly by activation of the melanocortinpathway in the hypothalamus.

Peptide YY (PYY) is secreted from the entire gas-trointestinal tract, but especially from the ileum and colon. Food intake stimulates release of PYY, with blood concentrations rising to peak levels 1 to 2 hours after ingesting a meal. These peak levels of PYY are influenced by the number of calories ingested and the composition of the food, with higher levels of PYY observed after meals with a high fat content. Although injections of PYY into mice have been shown to decrease food intake for 12 hours or more, the impor-tance of this gastrointestinal hormone in regulating appetite in humans is still unclear.

For reasons that are not entirely understood, the presence of food in the intestines stimulates them to secrete glucagon-like peptide,which in turn enhances glucose-dependent insulin production and secretion from the pancreas. Glucagon-like peptide and insulin both tend to suppress appetite. Thus, eating a meal stimulates the release of several gastrointestinal hor-mones that may induce satiety and reduce further intake of food (see Fig. 71–1).

Ghrelin is a hormone released mainly by the oxynticcells of the stomach but also, to a much less extent, by the intestine. Blood levels of ghrelin rise during fasting, peak just before eating, and then fall rapidly after a meal, suggesting a possible role in stimulating feeding. Also, administration of ghrelin increases food intake in experimental animals, further supporting the possibility that it may be an orexigenic hormone.

However, its physiologic role in humans is still uncertain.

Oral Receptors Meter Food Intake. When an animal withan esophageal fistula is fed large quantities of food, even though this food is immediately lost again to the exterior, the degree of hunger is decreased after a reasonable quantity of food has passed through the mouth. This effect occurs despite the fact that the gas-trointestinal tract does not become the least bit filled. Therefore, it is postulated that various “oral factors” related to feeding, such as chewing, salivation, swal-lowing, and tasting, “meter” the food as it passes through the mouth, and after a certain amount has passed, the hypothalamic feeding center becomes inhibited. However, the inhibition caused by this metering mechanism is considerably less intense and of shorter duration, usually lasting for only 20 to 40 minutes, than is the inhibition caused by gastrointesti-nal filling.

Effect of Blood Concentrations of Glucose, Amino Acids, and Lipids on Hunger and Feeding. It has long been known thata decrease in blood glucose concentration causes hunger, which has led to the so-called glucostatictheory of hunger and feeding regulation. Similarstudies have demonstrated the same effect for blood amino acid concentration and blood concentration of breakdown products of lipids such as the keto acids and some fatty acids, leading to the aminostatic and lipostatic theories of regulation.That is, when the avail-ability of any of the three major types of food decreases, the desire for feeding is increased, eventu-ally returning the blood metabolite concentrations back toward normal.

Neurophysiologic studies of function in specific areas of the brain also support the glucostatic, amino-static, and lipostatic theories, by the following obser-vations: (1) A rise in blood glucose level increases therate of firing of glucoreceptor neurons in the satiety center in the ventromedial and paraventricular nuclei of the hypothalamus. (2) The same increase in bloodglucose level simultaneouslydecreases the firing of glu-cosensitive neurons in the hunger center of the lateral hypothalamus. In addition, some amino acids and lipidsubstances affect the rates of firing of these same neurons or other closely associated neurons.

Temperature Regulation and Food Intake. When an animalis exposed to cold, it tends to increase feeding; when it is exposed to heat, it tends to decrease its caloric intake. This is caused by interaction within the hypo-thalamus between the temperature-regulating system  and the food intake–regulating system. This is important, because increased food intake in a cold animal (1) increases its metabolic rate and (2) provides increased fat for insulation, both of which tend to correct the cold state.

Most of the stored energy in the body consists of fat, the amount of which can vary considerably in differ-ent individuals.What regulates this energy reserve, and why is there so much variability among individuals?

Recent studies suggest that the hypothalamus senses energy storage through the actions of leptin, a peptide hormone released from adipocytes. When the amount of adipose tissue increases (signaling excess energy storage), the adipocytes produce increased amounts of leptin, which is released into the blood. Leptin then circulates to the brain, where it moves across the blood-brain barrier by facilitated diffusion and occupies leptin receptors at multiple sites in the hypothalamus, especially the POMC neurons of the arcuate nuclei and neurons of the paraventricular nuclei.

Stimulation of leptin receptors in these hypothala-mic nuclei initiates multiple actions that decrease fat storage, including (1) decreased production in the hypothalamus of appetite stimulators, such as NPY and AGRP; (2) activation of POMC neurons, causing release of a-MSH and activation of melanocortin receptors; (3) increased production in the hypothala-mus of substances, such ascorticotropin-releasinghormone, that decrease food intake; (4) increased sympathetic nerve activity (through neural projectionsfrom the hypothalamus to the vasomotor centers), which increases metabolic rate and energy expendi-ture; and (5) decreased insulin secretion by the pan-creatic beta cells, which decreases energy storage. Thus, leptin may be an important means by which the adipose tissue signals the brain that enough energy has been stored and that intake of food is no longer necessary.

In mice or humans with mutations that render their fat cells unable to produce leptin or mutations that cause defective leptin receptors in the hypothalamus, marked hyperphagia and morbid obesity occur. In most obese humans, however, there does not appear to be a deficiency of leptin production, because plasma leptin levels increase in proportion with increasing adiposity. Therefore, some physiologists believe that obesity may be associated with leptin resistance; that is, leptin receptors or post-receptor signaling pathways normally activated by leptin may be defective in obese people, who continue to eat despite very high levels of leptin.

Another explanation for the failure of leptin to prevent increasing adiposity in obese individuals is that there are many redundant systems that control feeding behavior, as well as social and cultural factors that can cause continued excess food intake even in the presence of high levels of leptin.

Summary of Long-Term Regulation. Even though ourinformation on the different feedback factors in long-term feeding regulation is imprecise, we can make the following general statement: When the energy stores of the body fall below normal, the feeding centers of the hypothalamus and other areas of the brain become highly active, and the person exhibits increased hunger as well as searching for food; conversely, when the energy stores (mainly the fat stores) are already abundant, the person usually loses the sensation of hunger and develops a state of satiety.

The long-term regulatory system for feeding, which includes all the nutritional energy feedback mecha-nisms, helps maintain constant stores of nutrients in the tissues, preventing them from becoming too low or too high. The short-term regulatory stimuli serve two other purposes. First, they tend to make the person eat smaller quantities at each eating session, thus allowing food to pass through the gastrointestinal tract at a steadier pace, so that its digestive and absorptive mechanisms can work at optimal rates rather than becoming periodically overburdened. Second, they help prevent the person from eating amounts at each meal that would be too much for the metabolic storage systems once all the food has been absorbed.