A virus is a set of genes, composed of either DNA or RNA, packaged in a protein-containing coat.

A virus is a set of genes, composed of either DNA or RNA, packaged in a protein-containing coat. The resulting particle is called a virion. Viruses that infect humans are considered along with the general class of animal viruses; viruses that infect bacte-ria are referred to as bacteriophages, or phages for short. Virus reproduction requires that a virus particle infect a cell and program the cellular machinery to synthesize the constituents required for the assembly of new virions. Thus, a virus is considered an intracellular parasite. The infected host cell may produce hundreds to hundreds of thousands of new virions and usually dies. Tissue damage as a result of cell death accounts for the pathology of many viral diseases in humans. In some cases, the infected cells survive, resulting in persistent virus production and a chronic infection that can remain asymptomatic, produce a chronic disease state, or lead to relapse of an infection.

In some circumstances, a virus fails to reproduce itself and instead enters a latent state (called lysogeny in the case of bacteriophages), from which there is the potential for reac-tivation at a later time. A possible consequence of the presence of viral genes in a latent state is a new genotype for the cell. Some determinants of bacterial virulence and some malignancies of animal cells are examples of the genetic effects of latent viruses. Appar-ently vertebrates have had to coexist with viruses for a long time because they have evolved the special nonspecific interferon system, which operates in conjunction with the highly specific immune system to combat virus infections.

In the discussion to follow, the biological and genetic bases for these phenomena are presented; three themes are emphasized.

1.   Different viruses can have very different genetic structures, and this diversity is re-flected in their replicative strategies.

2.   Because of their small size, viruses have achieved a very high degree of genetic economy.

3.   Viruses depend to a great extent on host cell functions and, therefore, are difficult to combat medically. They do exhibit unique steps in their replicative cycles that are potential targets for antiviral therapy. 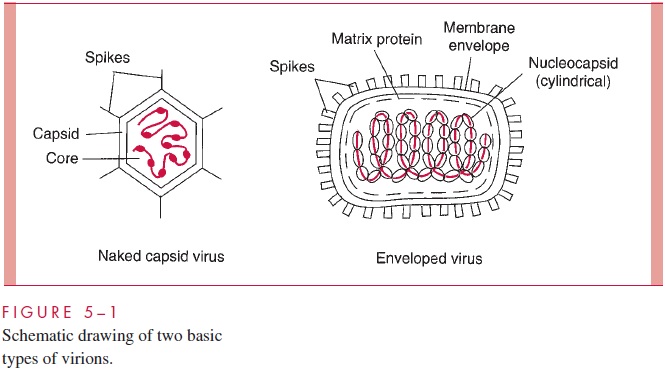