Viruses are obligate intracellular parasites that use many of the host cell’s biochemical mechanisms and products to sustain their viability.

Viruses are obligate intracellular parasites that use many of the host cell’s biochemical mechanisms and products to sustain their viability. A mature virus (virion) can exist outside a host cell and still retain its infective properties. However, to reproduce, the virus must enter the host cell, take over the host cell’s mecha-nisms for nucleic acid and protein synthesis, and direct the host cell to make new viral particles.

Viruses are composed of one or more strands of a nu-cleic acid (core) enclosed by a protein coat (capsid). Many viruses possess an outer envelope of protein or lipoprotein. Viral cores can contain either DNA or RNA; thus, viruses may be classified as DNA viruses or RNA viruses. Further classification is usually based on morphology, cellular site of viral multiplication, or other characteristics.

Although the specific details of replication vary among types of viruses, the overall process can be described as consisting of five phases: (1) attachment and penetra-tion, (2) uncoating, (3) synthesis of viral components, (4) assembly of virus particles, and (5) release of the virus. An overview of the viral replication cycle is shown in Figure 50.1. 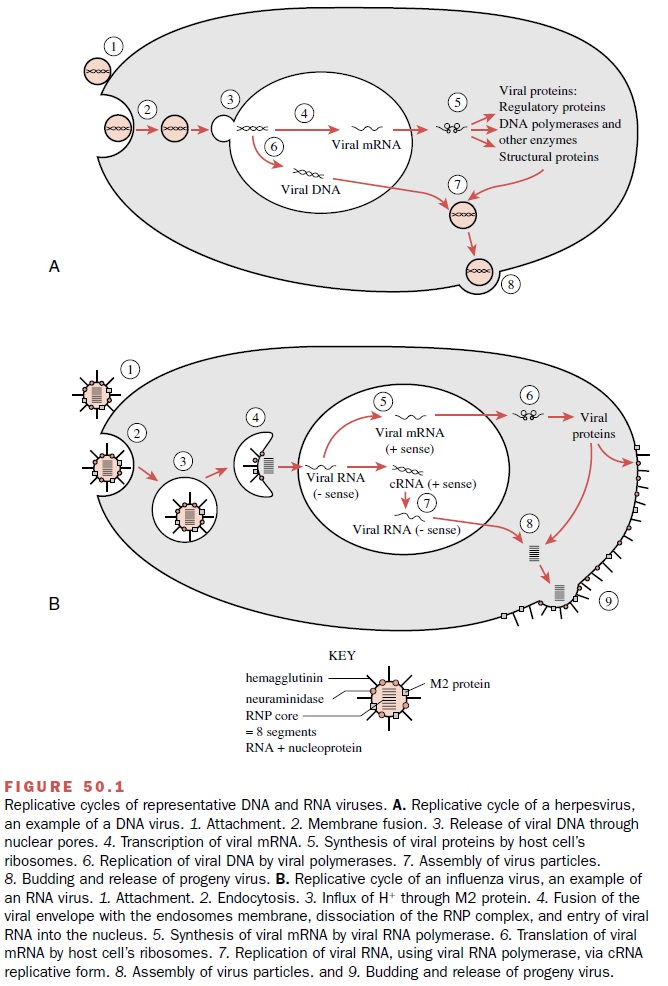 Infection begins when specific receptor sites on the virus recognize corresponding surface proteins on the host cell. The virus penetrates the host membrane by a mechanism resembling endocytosis and is encapsulated by the host cell’s cytoplasm, forming a vacuole. Next, the protein coat dissociates and releases the viral genome, usually into the host cell’s nucleus.

Following the release of its genome, the virus synthesizes nucleic acids and proteins in sequence. In DNA viruses, the first genes to be transcribed are the im-mediate–early genes. These genes code for regulatory proteins that in turn initiate the transcription of the early genes responsible for viral genome replication. After the viral DNA is replicated, the late genes are transcribed and translated, producing proteins required for the assembly of the new virions. RNA viruses have several major strate-gies for genome replication and protein expression. Certain RNA viruses contain enzymes that synthesize messenger RNA (mRNA) using their RNA as a template; others use their own RNA as mRNA. The retroviruses use viral reverse transcriptase enzymes to produce DNA using viral RNA as a template. The newly synthesized DNA integrates into the host genome and is transcribed into mRNA and genomic RNA for progeny virions.

Following their production, the viral components are assembled to form a mature virus particle. The viral genome is encapsulated by viral protein; in some cases (e.g. adenovirus, poliovirus), it is not encapsulated. In certain viruses, such as the poxviruses, multiple mem-branes surround the capsid. Release of the virus from the host cell may be rapid and produce cell lysis and death. A slower process resembling budding may allow the host cell to survive.

Three basic approaches are used to control viral dis-eases: vaccination, antiviral chemotherapy, and stimula-tion of host resistance mechanisms.Vaccination has been used successfully to prevent measles, rubella, mumps, poliomyelitis, yellow fever, smallpox, chickenpox, and hepatitis B. Unfortunately, the usefulness of vaccines ap-pears to be limited when many stereotypes are involved (e.g., rhinoviruses, HIV). Furthermore, vaccines have lit-tle or no use once the infection has been established be-cause they cannot prevent the spread of active infections within the host. Passive immunization with human im-mune globulin, equine antiserum, or antiserum from vaccinated humans can be used to assist the body’s own defense mechanisms. Intramuscular preparations of im-mune globulin may be used to prevent infection follow-ing viral exposure and as replacement therapy in indi-viduals with antibody deficiencies. Peak plasma concentrations of intramuscular immune globulins occur in about 2 days. In contrast, intravenously administered immune globulin provides immediate passive immunity.

the chemotherapy of viruses is finding a drug that is se-lectively toxic to the virus. Stimulation of host resistance is the least used of the antiviral intervention strategies.