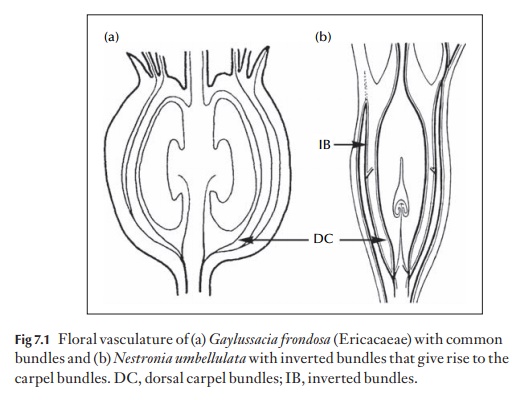 Many of the anatomical features used in comparative studies are to be found in the arrangement and number of vascular bundles and their types of branching in inflorescences, flowers and floral parts.

Many of the anatomical features used in comparative studies are to be found in the arrangement and number of vascular bundles and their types of branching in inflorescences, flowers and floral parts. These patterns can be hard to interpret. Are all or most of the bundle pathways genetically prede-termined? Could a significant proportion of bundles be present as respons-es to physiological demand, that is, related to physiological needs which are to be met rather than some archaic pattern recapitulating ancestral condi-tions? Despite the difficulties of observation and interpretation, many valuable studies have provided data on vascularization that enable us to un-derstand the interrelationships between many genera and families of flowering plants.

Those whose interests lie in the phylogeny of flowering plants, or in the origins of angiosperm flowers, make considerable use of the results of the studies on vascularization. It is widely held that the vascular systems inflowers are conservative, that is, they may remain relatively unchanged even when the general shape of the flower has altered by evolution. This may lead to the formation of odd-looking loops or curves in some of the vas-cular strands to accommodate changes in the relative positions of the floral parts. In some flowers, small branches of the vascular system end blindly. This could be taken to mean that in one or more of the ancestors of the plant similar strands served some organs or appendages that are lacking in the present-day representative. For example, a modern, unisexual female flow-er might have remnants of a vascular system that would have served stamens in a bisexual ancestor.

When organs are adnate, for example, a stamen fused with a petal, it often follows that the vascular supplies of the two become fused into one strand. Bundle fusions can make it more difficult to interpret the vascular systems of flowers in comparative studies.

The number of traces to each floral organ can vary. Often petals have only one trace, but petals in certain families regularly have three petal trac-es. The number of traces to each sepal is often the same as that to the foliage leaves of the same plant. Stamens may have one or three traces, but one is by far the most common number. Carpels may possess one, three, five or more traces. Dorsal and marginal or ventral traces are distinguished in descrip-tions, when three or more are present.

Sometimes a flower may have very unusual morphology that is difficult to interpret. This may be related to adaptations to particular pollinators. It could be that examination of its vasculature would help one to understand the true nature of the various parts. If other members of the same genus or family have more normal flowers, then comparative studies could prove most informative.

A number of theories concerning the origin of the angiosperm flower have their basis in comparative studies of floral and vegetative vascular pat-terns of both living and fossil plants. Despite the amount of work done by numerous people, there is no common consensus of opinion. Doubtless, new theories will be proposed. Some think that we have all the evidence we need, if only we will interpret it properly. Others consider that there are such large gaps in the fossil record that no one will ever be able to prove their theories! Modern molecular studies have led to the development of much less subjective phylogenies, and it has become profitable to study flower morphology in the light of the new information these contain.

Because the classifications of plants give a great deal of prominence to characters of flower and fruits, there is a wealth of data on these parts. Con-sequently, it is normal to try to identify plants with flowers or fruit attached by reference to floras and herbarium specimens. Anatomical studies may help if the floral parts are in poor condition. Floral vascular anatomy may also give clues to the plant family that a species belongs to when the flowers or fruits are found separate from the rest of the plant. A good example of this is the different vasculature patterns found in perigynous flowers and fruits from different plant families as shown in Fig. 7.1. There are two basic patterns. In one of them the vasculature to floral parts on the same radius arises from a common bundle in the ovary wall as in Gaylussacia frondosa (Fig. 7.1a) and all bundles as seen in cross-section have the xylem internal to the phloem. By contrast, in the other organization, the bundles that supply the carpel arise from a recurved bundle in the ovary wall as in Nestroniaumbellulata (Fig. 7.1b), where the recurved bundles in the fruit wall are in-verted, so that the phloem is interior to the xylem. These basic differences in vascular anatomy allow one to narrow the choices for unidentified fruits derived from inferior ovaries because the features are associated with par-ticular plant families. Thus, the first condition is found, for example, in the Rosaceae and Ericaceae as well as in other families, and the second condi-tion is found, for example, in the Cactaceae and Santalaceae as well as in other families. These features thus narrow the potential choices for identi-fication of archaeological as well as palaeontological specimens.