The wide use of seeds and fruits in human food and animal feedstuffs has made knowledge of their anatomy of paramount importance.

Although many species have been studied for seed and fruit structure, relatively few families have been carefully studied systematically and in de-tail, followed by documentation of the results.

Plants of economic importance have received most attention. The main cereals, oil seeds and edible leguminous seeds have been described anatom-ically, as have those of selected weeds and poisonous plants. Figure 7.4 shows some fruit walls and seed coats in transverse section. Good sources of infor-mation are the specialist books and reference books on the anatomy of food plants and only a very general overview is given here. 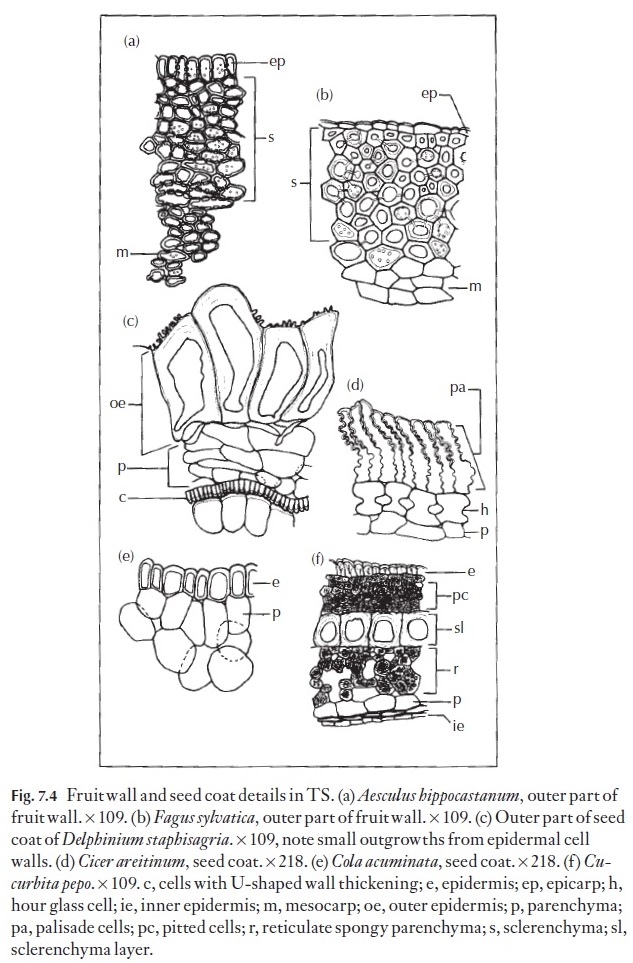 The fruit wall is termed the pericarp and it is divided into three regions, the outer or exocarp, the middle or mesocarp, and the inner or endocarp (Fig. 7.4). The surface of the fruit exhibits many of the features found in the epidermis of leaves and stems both in light microscopy and SEM. Some families have members with additional features that help in identification. An example of two features are the presence of slime cells and slime tri-chomes in some families such as the achenes of the Asteraceae (Figs 7.5, 7.6). The distribution of epidermal slime cells occurring either singly or in groups can be used to identify species as in Anthemis (Fig. 7.5). Slime tri-chomes (Fig. 7.6) are implicated in the adherence of the dry sclerified achenes to dispersal organisms and also in the uptake of water duration hy-dration of the fruits for germination of many Asteraceae. 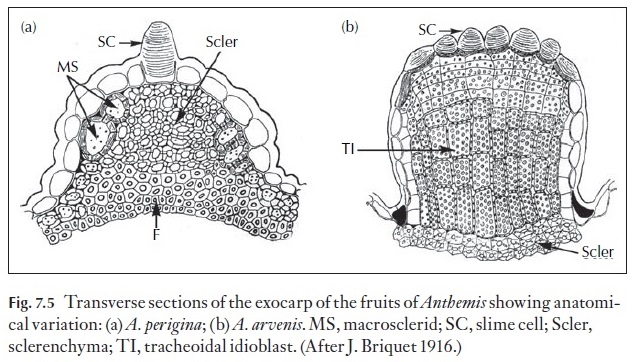 Other features of the exocarp include the distribution and types of cells. As shown in Fig. 7.5, the ribs of the fruits of Anthemis arvenis are composed of tracheoidal idioblasts and those of Anthemis periginaare composed of sclerenchyma. Thus, even though the external morphologies are similar, the anatomies are quite different. 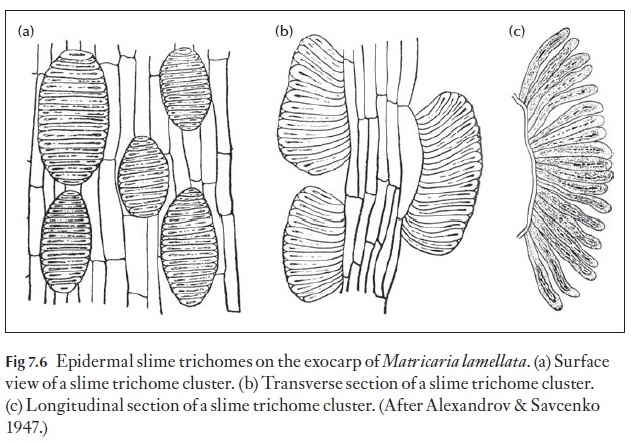 In the mint family (Lamiaceae), the nutlets have a unique anatomy in that the inner hypodermis appears as a heavily lignified sclerenchyma composed of elongated cells as seen in transverse section (Fig. 7.7). These sclereids appear as if they are lignified palisade cells. 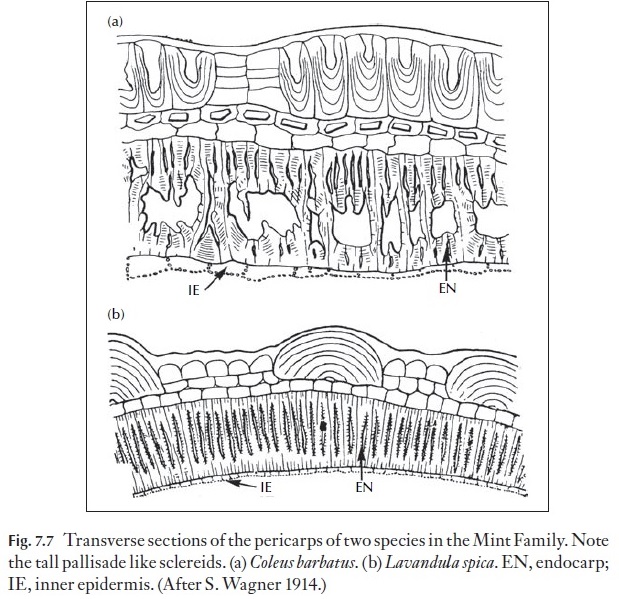 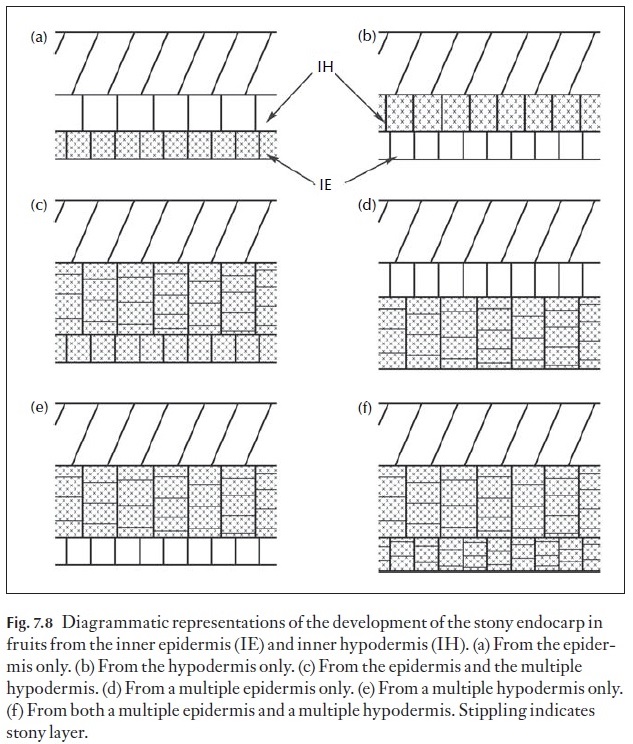 Enough is known for us to realize that good comparative studies of seeds can yield taxonomic characters of some significance. One excellent example of this is the presence of ruminate endosperm (Fig. 7.9), which is diagnostic of some plant families such as the Annonaceae (the custard apple family) and the Myristicaceae (the nutmeg family) where the ruminate endosperm is easily seem in hand sections of whole nutmeg seeds. 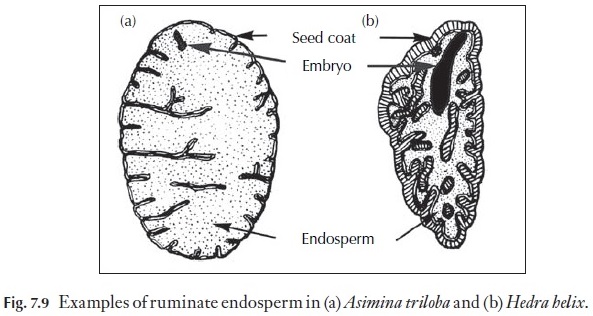 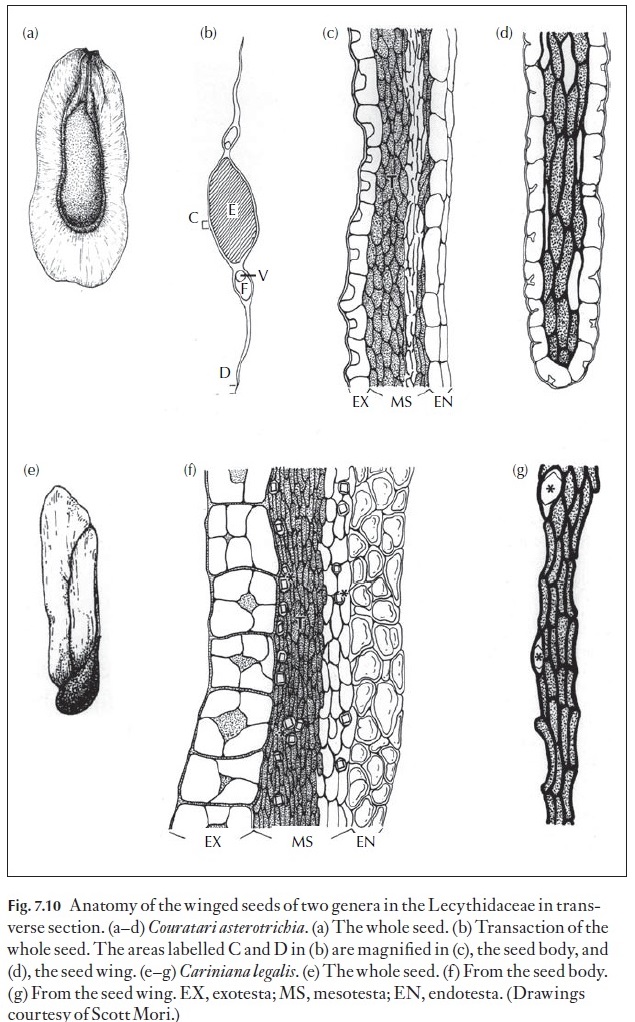 the anatomy of seeds can be found in the winged seeds (Fig. 7.10) of the bra-zil nut family (Lecythidaceae). Not only are the wings apparently different morphologically, they are also very different in their anatomy as is the body of the seeds. Thus, we see that the thickenings of exotestal cells of the body of the seed of Cariniana legalis are quite distinct as compared to those in Couratari asterotrichia, and that the exotesta is not present in the seed wingof the former but is quite distinct in the latter. Note also the difference in the anatomy of the mesotesta in the body of the seeds of these two species as well as in the wings.

As with pollen studies, interest in seed coat anatomy has been stimulated by the general availability of scanning electron microscopes. It is now often possible to detect minute differences in seed coat patterns which might ena-ble us to define species characteristics. Seeds do tend to vary a lot in size and sometimes in shape within a species. Their surface patterns go through de-velopmental stages and consequently only mature seeds should be studied for comparative purposes.

The adaptive or physiological significance of surface features is by no means clear, and valuable studies on the development of patterns to maturity are of current interest. Changes that take place during germina-tion are also studied, as are changes under storage conditions that could lead to deterioration of the seed and loss of viability.

The conditions required for germination are so specific and specialized for some seeds that elaborate experiments have to be conducted in order to discover them. Parallel anatomical studies can help in the interpretation of the results.