Pollen studies have increased enormously with the advent of transmission and scanning electron microscopy.

Pollen studies have increased enormously with the advent of transmission and scanning electron microscopy. However, a great deal of foundation work was carried out with the light microscope; indeed a very sound basis was established. New tools have meant that details of fine surface pattern-ing can be seen easily (Fig. 7.2). Surveys of families can now be carried out much more rapidly, and electron micrographs, particularly from the SEM, are easy to interpret. 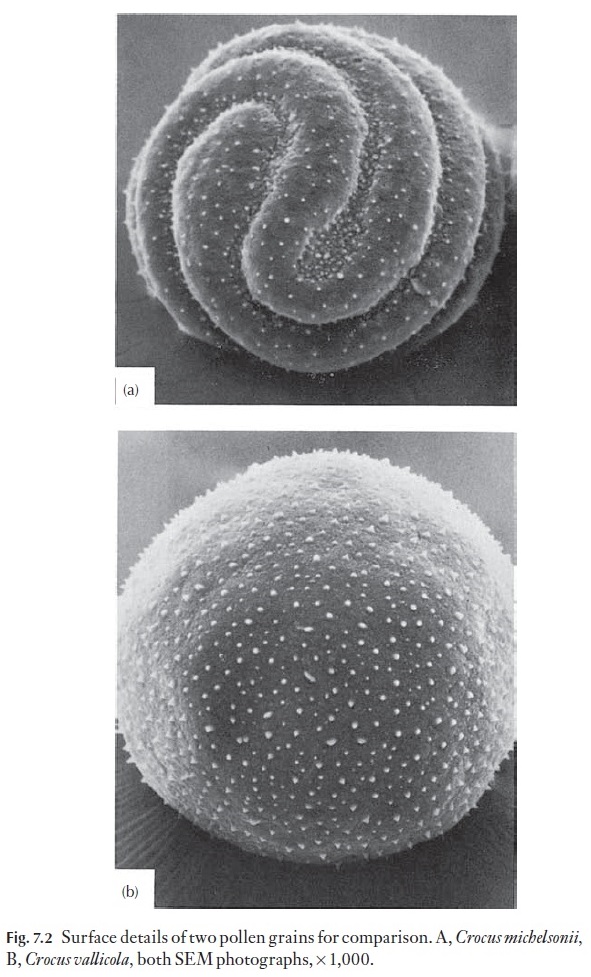 Pollen grains are often readily identified to the genus level, and some-times to the species level, if adequate reference material is available. In some families there is great variability in pollen grain morphology and surface features; in others there is uniformity.

Besides the taxonomic inferences which can be drawn from studies in comparative palynology, the subject has a number of other applied aspects. For example, honey purity and origin can be determined by a study of the pollen grains it contains – pure heather honey would not be expected to contain large quantities of Eucalyptus pollen. Adulteration can usually be detected microscopically. Pollen is often found on clothing and can provide useful evidence in forensic cases.

Pollen grains shed from plants remain in a recognizable form in peat de-posits for very long periods of time. By careful analysis of the pollen grains in successive layers of peat, or at successive levels, it is often possible to build up a picture of the vegetation of previous ages.

Most plants have mechanisms by which they can ‘recognize’ pollen grains from their own and other species. Stigmas often possess a complex of chem-icals that enable them to respond to chemicals contained in the outer layers of pollen grains. 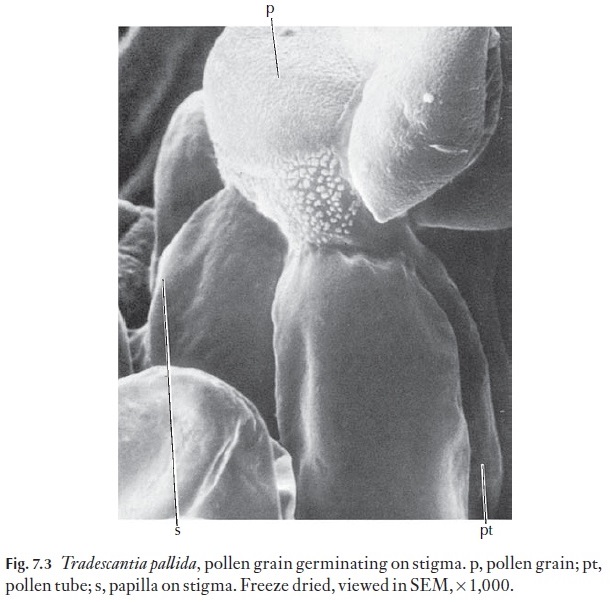 The chemicals are usually proteins. Figure 7.3 shows a pollen grain ger-minating on a stigma. In species which are not self-fertile, the stigma re-jects pollen from anthers produced by the same or other flowers on the plant. Many plants normally reject pollen from other species. However, some species are interfertile. In nature they might not normally be polli-nated by other species. Their flowering periods might not coincide, or they may be too distant from one another. In some plants, the stamens are ma-ture well before the stigma (protandry) and pollen is dispersed before the stigma is receptive. In others the stigma may mature and senesce before pollen from the same flower is released (protogyny).

Pollen can be stored alive at low temperatures, so we can try out crosses even if flowering periods are different. The horticulturalist attempting to maintain pure species is only too aware of the crossing which can go on be-tween related plants brought together in one glasshouse.

Some of the rejection mechanisms result in obvious physical changes in the stigma. For example, reactions may occur which cause the stigma to callus over, so that the pollen tube cannot enter. Sometimes the size of the stigmatic papillae may be too great for small pollen grains to germinate on them successfully, or they may be too small for large grains, and also pre-vent effective pollination. Although pollen from closely related species may be accepted by a stigma, this is not always the case – incompatibilities may arise. In another mechanism, which prevents different species from cross-ing, the length of the style may be much longer than the potential length of the pollen tube, so that fertilization cannot take place.

Where it is desirable horticulturally or agriculturally to produce hybrid plants, anatomical and histochemical studies of the pollen–stigma

interactions can help us to manipulate the process and override the block-ing mechanism.

The system which promotes outcrossing may simply rely on different relative heights of anthers and stigma in the flower, as in pin-eyed and thrum-eyed primulas. In the first, the stamens are short and the stigma is elevated on a long style; in the second anthers are at the outer end of the co-rolla tube, and a short style keeps the stigma at a low level. Insects visiting a pin-eyed flower are more likely to deposit pollen on the stigma of a thrum-eyed than of a pin-eyed flower.

Pollen itself can sometimes be cultured and made to produce haploid plants.