Chapter: Medical Physiology: Vascular Distensibility and Functions of the Arterial and Venous Systems

A valuable characteristic of the vascular system is that all blood vessels are distensible.

A valuable characteristic of the vascular system is that all blood vessels are distensible. We have seen one example of this: When the pres-sure in blood vessels is increased, this dilates the blood vessels and therefore decreases their resistance. The result is increased blood flow not only because of increased pressure but also because of decreased resistance, usually giving at least twice as much flow increase for each increase in pressure as one might expect.

Vascular distensibility also plays other important roles in circulatory function. For example, the distensible nature of the arteries allows them to accommodate the pulsatile output of the heart and to average out the pressure pulsations. This provides smooth, continuous flow of blood through the very small blood vessels of the tissues.

The most distensible by far of all the vessels are the veins. Even slight increases in venous pressure cause the veins to store 0.5 to 1.0 liter of extra blood. Therefore, the veins provide a reservoir function for storing large quan-tities of extra blood that can be called into use whenever required elsewhere in the circulation.

Units of Vascular Distensibility. Vascular distensibility normally is expressed as thefractional increase in volume for each millimeter of mercury rise in pressure, in accordance with the following formula:

That is, if 1 mm Hg causes a vessel that originally contained 10 millimeters of blood to increase its volume by 1 milliliter, the distensibility would be 0.1 per mm Hg, or 10 per cent per mm Hg.

Difference in Distensibility of the Arteries and the Veins. Anatomically, the wallsof the arteries are far stronger than those of the veins. Consequently, the arter-ies, on average, are about eight times less distensible than the veins. That is, a given increase in pressure causes about eight times as much increase in blood in a vein as in an artery of comparable size.

In hemodynamic studies, it usually is much more important to know the totalquantity of blood that can be stored in a given portion of the circulation foreach millimeter of mercury pressure rise than to know the distensibilities of the individual vessels. This value is called the compliance or capacitance of the respective vascular bed; that is,

The compliance of a systemic vein is about 24 times that of its corresponding artery because it is about 8 times as distensible and it has a volume about 3 times as great (8 x 3 = 24).

Volume-Pressure Curves of the Arterial and Venous Circulations

A convenient method for expressing the relation of pressure to volume in a vessel or in any portion of the circulation is to use the so-called volume-pressurecurve. The red and blue solid curves in Figure 15–1represent, respectively, the volume-pressure curves of the normal systemic arterial system and venous system, showing that when the arterial system of the average adult person (including all the large arteries, small arteries, and arterioles) is filled with about 700 milliliters of blood, the mean arterial pressure is 100 mm Hg, but when it is filled with only 400 milli-liters of blood, the pressure falls to zero.

In the entire systemic venous system, the volume normally ranges from 2000 to 3500 milliliters, and a change of several hundred millimeters in this volume is required to change the venous pressure only 3 to 5 mm Hg. This mainly explains why as much as one half liter of blood can be transfused into a healthy person in only a few minutes without greatly altering function of the circulation.

Effect of Sympathetic Stimulation or Sympathetic Inhibition on the Volume-Pressure Relations of the Arterial and Venous Systems.Also shown in Figure 15–1 are the effects thatexciting or inhibiting the vascular sympathetic nerves has on the volume-pressure curves. It is evident that increase in vascular smooth muscle tone caused by sympathetic stimulation increases the pressure at each volume of the arteries or veins, whereas sympathetic inhibition decreases the pressure at each volume. 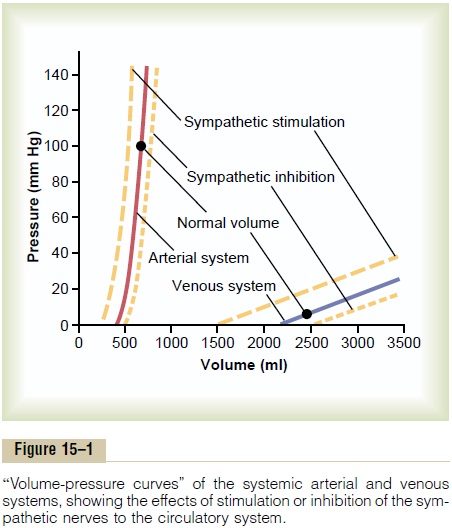 Control of the vessels in this manner by the sympa-thetics is a valuable means for diminishing the dimensions of one segment of the circulation, thus transferring blood to other segments. For instance, an increase in vascular tone throughout the systemic cir-culation often causes large volumes of blood to shift into the heart, which is one of the principal methods that the body uses to increase heart pumping.

Sympathetic control of vascular capacitance is also highly important during hemorrhage. Enhancement of sympathetic tone, especially to the veins, reduces the vessel sizes enough that the circulation continues to operate almost normally even when as much as 25 per cent of the total blood volume has been lost.

The term “delayed compliance” means that a vessel exposed to increased volume at first exhibits a large increase in pressure, but progressive delayed stretching of smooth muscle in the vessel wall allows the pressure to return back toward normal over a period of minutes to hours. This effect is shown in Figure 15–2. In this figure, the pressure is recorded in a small segment of a vein that is occluded at both ends. An extra volume of blood is suddenly injected until the pressure rises from 5 to 12 mm Hg. Even though none of the blood is removed after it is injected, the pressure begins to decrease immediately and approaches about 9 mm Hg after several minutes. In other words, the volume of blood injected causes immediate elastic distention of the vein, but then the smooth muscle fibers of the vein begin to “creep” to longer lengths, and their tensions corre-spondingly decrease. This effect is a characteristic of all smooth muscle tissue and is called stress-relaxation. 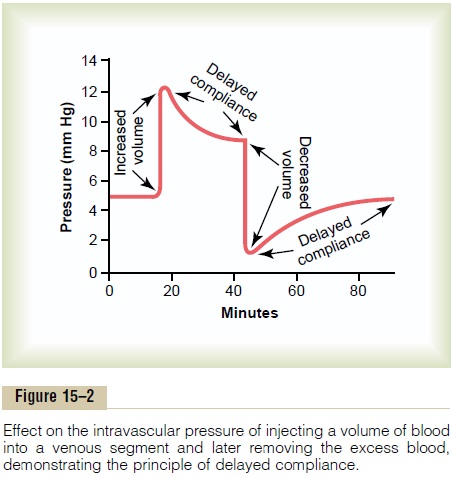