Chapter: Medical Physiology: Vascular Distensibility and Functions of the Arterial and Venous Systems

With each beat of the heart a new surge of blood fills the arteries.

With each beat of the heart a new surge of blood fills the arteries. Were it not for distensibility of the arte-rial system, all of this new blood would have to flow through the peripheral blood vessels almost instanta-neously, only during cardiac systole, and no flow would occur during diastole. However, normally the compli-ance of the arterial tree reduces the pressure pulsa-tions to almost no pulsations by the time the blood reaches the capillaries; therefore, tissue blood flow is mainly continuous with very little pulsation.

A typical record of the pressure pulsations at the root of the aorta is shown in Figure 15–3. In the healthy young adult, the pressure at the top of each pulse, called the systolic pressure, is about 120 mm Hg. 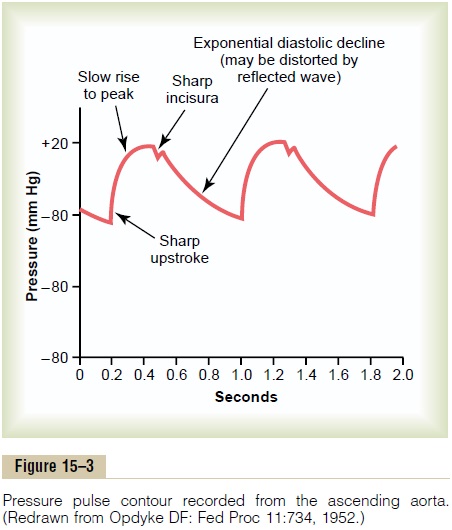 At the lowest point of each pulse, called the diastolicpressure, it is about 80 mm Hg. The difference betweenthese two pressures, about 40 mm Hg, is called the pulse pressure.

Two major factors affect the pulse pressure: (1) the stroke volume output of the heart and (2) the compli-ance (total distensibility) of the arterial tree. A third,less important factor is the character of ejection from the heart during systole. In effect, then, pulse pressure is determined ap-proximately by the ratio of stroke volume output tocompliance of the arterial tree. Any condition of the cir-culation that affects either of these two factors also affects the pulse pressure.

Some conditions of the circulation also cause abnor-mal contours of the pressure pulse wave in additionto altering the pulse pressure. Especially distinctive among these are aortic stenosis, patent ductus arterio-sus, and aortic regurgitation, each of which is shown in Figure 15–4.

In aortic stenosis, the diameter of the aortic valve opening is reduced significantly, and the aortic pres-sure pulse is decreased significantly because of dimin-ished blood flow outward through the stenotic valve.

In patent ductus arteriosus, one half or more of the blood pumped into the aorta by the left ventricle flows immediately backward through the wide-open ductus into the pulmonary artery and lung blood vessels, thus allowing the diastolic pressure to fall very low before the next heartbeat.

In aortic regurgitation, the aortic valve is absent or will not close completely. Therefore, after each heart-beat, the blood that has just been pumped into the aorta flows immediately backward into the left ventri-cle. As a result, the aortic pressure can fall all the way to zero between heartbeats. Also, there is no incisura in the aortic pulse contour because there is no aortic valve to close.

Transmission of Pressure Pulses to the Peripheral Arteries

When the heart ejects blood into the aorta during systole, at first only the proximal portion of the aorta becomes distended because the inertia of the blood prevents sudden blood movement all the way to the periphery. However, the rising pressure in the proxi-mal aorta rapidly overcomes this inertia, and the wave front of distention spreads farther and farther along the aorta, as shown in Figure 15–5. This is called trans-mission of the pressure pulse in the arteries. 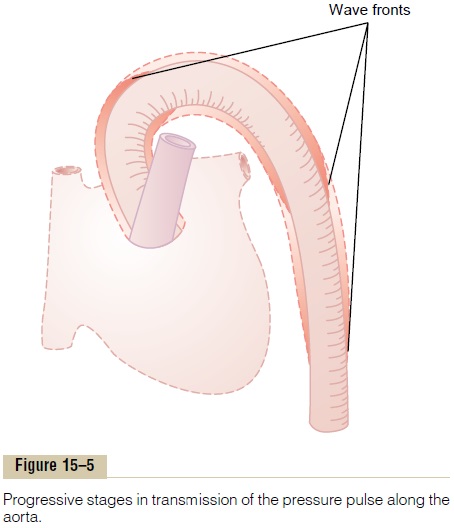 Damping of the Pressure Pulses in the Smaller Arteries, Arteri-oles, and Capillaries. Figure 15–6 shows typical changesin the contours of the pressure pulse as the pulse travels into the peripheral vessels. Note especially in the three lower curves that the intensity of pulsation becomes progressively less in the smaller arteries, the arterioles, and, especially, the capillaries. In fact, only when the aortic pulsations are extremely large or the arterioles are greatly dilated can pulsations be observed in the capillaries. 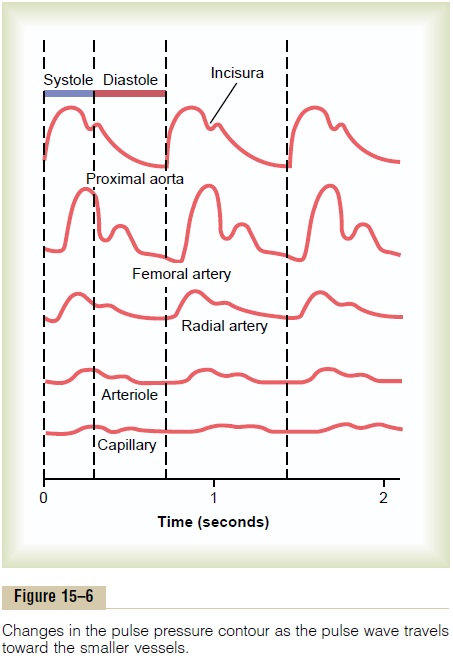 This progressive diminution of the pulsations in the periphery is called damping of the pressure pulses. The cause of this is twofold: (1) resistance to blood move-ment in the vessels and (2) compliance of the vessels. The resistance damps the pulsations because a small amount of blood must flow forward at the pulse wave front to distend the next segment of the vessel; the greater the resistance, the more difficult it is for this to occur. The compliance damps the pulsations because the more compliant a vessel, the greater the quantity of blood required at the pulse wave front to cause an increase in pressure. Therefore, in effect, the degree ofdamping is almost directly proportional to the product of resistance times compliance.

It is not reasonable to use pressure recorders that require needle insertion into an artery for making routine pressure measurements in human patients, although these are used on occasion when special studies are necessary. Instead, the clinician determines systolic and diastolic pressures by indirect means, usually by the auscultatory method.

Auscultatory Method. Figure 15–7 shows the auscultatorymethod for determining systolic and diastolic arterial pressures. A stethoscope is placed over the antecubital artery and a blood pressure cuff is inflated around the upper arm. As long as the cuff continues to compress the arm with too little pressure to close the brachial artery, no sounds are heard from the antecubital artery with the stethoscope. However, when the cuff pressure is great enough to close the artery during part of the arterial pressure cycle, a sound then is heard with each pulsation. These sounds are called Korotkoff sounds. 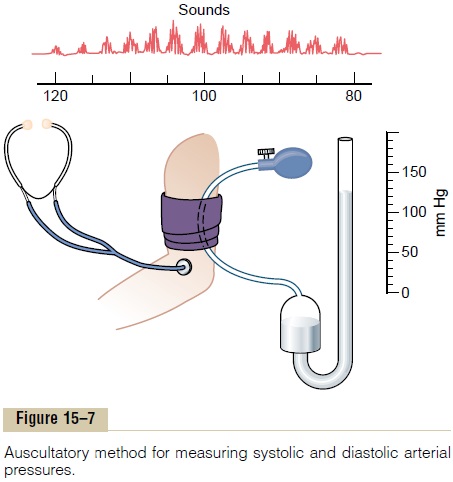 The exact cause of Korotkoff sounds is still debated, but they are believed to be caused mainly by blood jetting through the partly occluded vessel. The jet causes turbulence in the vessel beyond the cuff, and this sets up the vibrations heard through the stethoscope.

As the pressure in the cuff is lowered still more, the Korotkoff sounds change in quality, having less of the tapping quality and more of a rhythmical and harsher quality. Then, finally, when the pressure in the cuff falls to equal diastolic pressure, the artery no longer closes during diastole, which means that the basic factor causing the sounds (the jetting of blood through a squeezed artery) is no longer present. Therefore, the sounds suddenly change to a muffled quality, then dis-appear entirely after another 5- to 10-millimeter drop in cuff pressure. One notes the manometer pressure when the Korotkoff sounds change to the muffled quality; this pressure is about equal to the diastolic pressure. The auscultatory method for determining systolic and diastolic pressures is not entirely accurate, but it usually gives values within 10 per cent of those determined by direct catheter measurement from inside the arteries.

Normal Arterial Pressures as Measured by the Auscultatory Method. Figure 15–8 shows the approximate normal systolic and diastolic arterial pressures at different ages. The progressive increase in pressure with age results from the effects of aging on the blood pressure control mechanisms. We shall that the kidneys are primarily responsible for this long- term regulation of arterial pressure; and it is well known that the kidneys exhibit definitive changes with age, especially after the age of 50 years. A slight extra increase in systolic pressure usually occurs beyond the age of 60 years. This results from hardening of the arteries, which itself is an end-stage result of atherosclerosis. The final effect is a bounding systolic pressure with considerable increase in pulse pressure, as previously explained.