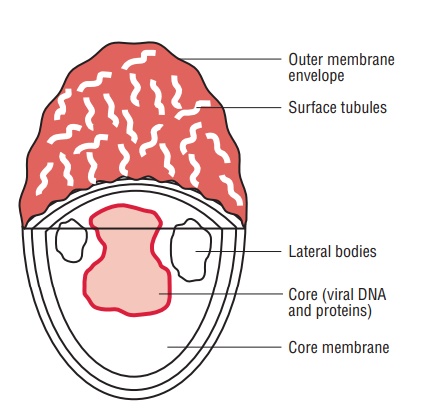 Vaccinia virus is unique in that it is an artificial virus and does not occur in nature as such.

Vaccinia virus is unique in that it is an artificial virus and does not occur in nature as such. Vaccinia virus was used as the smallpox vaccine. Edward Jenner originally used the cowpox virus for vaccination against smallpox. During subsequent years, the original virus strain was maintained by means of arm-to-arm inoculation, and was maintained as dry material on threads. Over a period of time, the virus mysteriously under-went some permanent changes from its original cowpox form in the strain of vaccinia now used in vaccines. This vaccinia virus could be readily differentiated from fresh isolates of cowpox and smallpox viruses.

Vaccinia virus is now being extensively studied in greater detail than variola, as it is safer to work with (Fig. 55-1). The virus is also being used as a vector for development of recombinant vaccines.

Both vaccinia and variola viruses show similarity in their morphology. They, however, can be differentiated by their growth properties and host range. 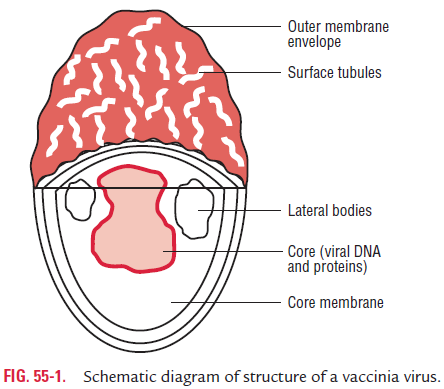 Vaccinia virus has recently been shown to be closely related to the New World orthopoxviruses, Cantagalo, and Aracatuba viruses.

Vaccinia virus, which is used for vaccination, can also cause infection in humans. Vaccinia causes infection by accidental inoculation of the skin. At the site of inoculation, the lesion begins as maculopapular rash, progressing to vesicles, pustules, and finally leading to formation of scab. The lesion heals with formation of marked scarring. Vaccinia virus in patients with eczema causes eczema vaccinata and in patients with immuno-deficiency causes progressive vaccinia.