Endometritis is inflammation of the endometrial lining in the uterus.

Endometritis is inflammation of the endometrial lining in the uterus. It can be acute or chronic.

•         Acute endometritis is an ascending infection from the cervix; it is associated with pregnancy and abortion.

•         Chronic endometritis is associated with PID and intrauterine devices; plasma cells are seen in the endometrium.

Endometriosis is the presence of endometrial glands and stroma outside the uterus. It most commonly affects women of reproductive age. Common sites of involvement are the ovaries, ovarian and uterine ligaments, pouch of Douglas, serosa of bowel and urinary bladder, and peritoneal cavity. It can present with chronic pelvic pain, dysmenorrhea and dyspareunia, rectal pain and constipation, abnormal uterine bleeding, or infertility.

Leiomyoma (fibroid), the most common tumor of the female genital tract, is a benign, smooth muscle tumor of the myometrium. Leiomyomas have a high incidence in African Americans, though they are common across all populations. Their growth is estrogen-dependent.

Grossly, leiomyomas form well-circumscribed, rubbery, white-tan masses with a whorled, trabeculated appearance on cut section. Leiomyomas are commonly mul-tiple, and may have subserosal, intramural, and submucosal location. The malignant variant is leiomyosarcoma.

o   Patients are at high risk for endometrial adenocarcinoma.

Endometrial adenocarcinoma is the most common malignant tumor of the lower female genital tract. It most commonly affects postmenopausal women who present with abnormal uterine bleeding. Risk factors are mostly related to estrogen: 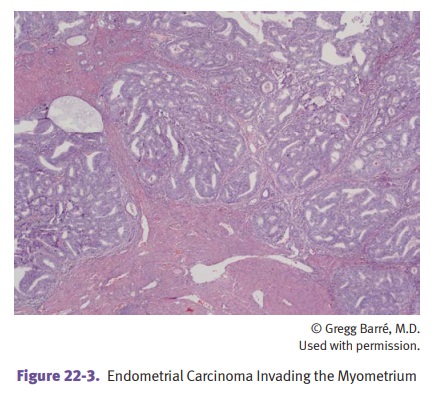 Adenomyosis is an invagination of the deeper layers of the endometrium into the myometrium, which causes menorrhagia and dysmenorrhea.

Anovulation can cause abnormal uterine bleeding, especially in women near men-arche and menopause. Biopsy shows glandular and stromal breakdown in a back-ground of proliferative phase endometrium.