“Using POSIX Threads.” The code creates two threads, both of which execute the routine func(). The main thread then waits for both the child threads to complete their work.

The code shown in Listing 4.3 contains a data race. The code uses POSIX threads, which will be introduced in Chapter 5, “Using POSIX Threads.” The code creates two threads, both of which execute the routine func(). The main thread then waits for both the child threads to complete their work.

Both threads will attempt to increment the variable counter. We can compile this code with GNU gcc and then use Helgrind, which is part of the Valgrind suite, to identify the data race. Valgrind is a tool that enables an application to be instrumented and its runtime behavior examined. The Helgrind tool uses this instrumentation to gather data about data races. Listing 4.4 shows the output from Helgrind.

The output from Helgrind shows that there is a potential data race between two threads, both executing line 7 in the file race.c. This is the anticipated result, but it should be pointed out that the tools will find some false positives. The programmer may write code where different threads access the same variable, but the programmer may know that there is an enforced order that stops an actual data race. The tools, however, may not be able to detect the enforced order and will report the potential data race.

Another tool that is able to detect potential data races is the Thread Analyzer in Oracle Solaris Studio. This tool requires an instrumented build of the application, data collection is done by the collect tool, and the graphical interface is launched with the command tha. Listing 4.5 shows the steps to do this.

The initial screen of the tool displays a list of data races, as shown in Figure 4.1. Once the user has identified the data race they are interested in, they can view the source code for the two locations in the code where the problem occurs. In the exam-ple, shown in Figure 4.2, both threads are executing the same source line. 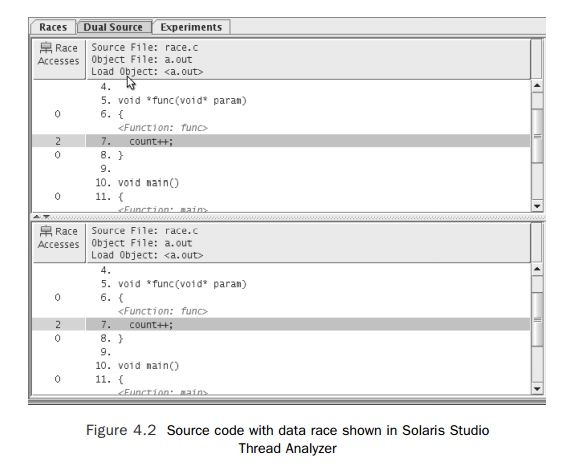