So far, we’ve demonstrated some fundamental ways to share access to resources between threads. We now need to discuss the situations where strategies might go wrong.

So far, we’ve demonstrated some fundamental ways to share access to resources between threads. We now need to discuss the situations where strategies might go wrong.

Listing 4.13 Two Threads in a Deadlock

The best way to avoid deadlocks is to ensure that threads always acquire the locks in the same order. So if thread 2 acquired the locks in the order A and then B, it would stall while waiting for lock A without having first acquired lock B. This would enable thread 1 to acquire B and then eventually release both locks, allowing thread 2 to make progress. A livelock traps threads in an unending loop releasing and acquiring locks. Livelocks

can be caused by code to back out of deadlocks. In Listing 4.14, the programmer has tried to implement a mechanism that avoids deadlocks. If the thread cannot obtain the second lock it requires, it releases the lock that it already holds.

The two routines update1() and update2() each have an outer loop. Routine update1() acquires lock A and then attempts to acquire lock B, whereas update2() does this in the opposite order. This is a classic deadlock opportunity, and to avoid it, the developer has written some code that causes the held lock to be released if it is not pos-sible to acquire the second lock. The routine canAquire(), in this example, returns immediately either having acquired the lock or having failed to acquire the lock.

Listing 4.14 Two Threads in a Livelock 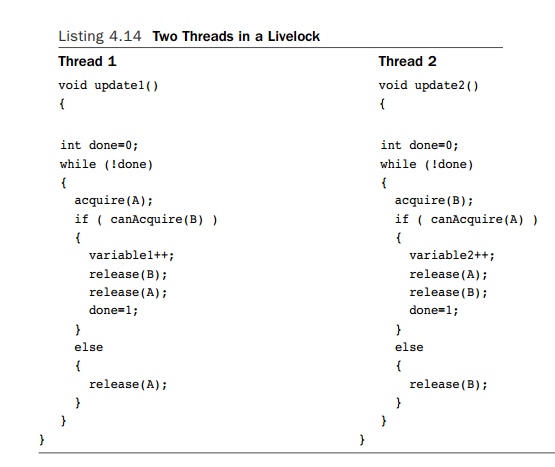 If two threads encounter this code at the same time, they will be trapped in a livelock of constantly acquiring and releasing mutexes, but it is very unlikely that either will make progress. Each thread acquires a lock and then attempts to acquire the second lock that it needs. If it fails to acquire the second lock, it releases the lock it is holding, before attempting to acquire both locks again. The thread exits the loop when it manages to successfully acquire both locks, which will eventually happen, but until then, the application will make no forward progress.