Use of Proteins for Energy

Once the cells are filled to their limits with stored protein, any additional amino acids in the body fluids are degraded and used for energy or are stored mainly as fat or secondarily as glycogen.

Use of Proteins for Energy

Once the cells are filled to their limits with stored protein, any additional amino acids in the body fluids are degraded and used for energy or are stored mainly as fat or secondarily as glycogen. This degradation occurs almost entirely in the liver, and it begins withdeamina-tion, which is explained in the following section.

The greatest amount of deamination occurs by the following transamination schema: 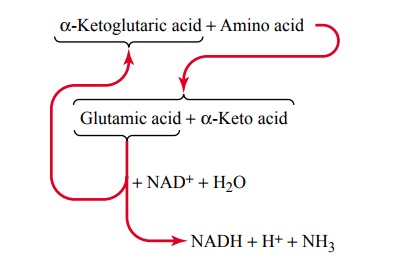 Note from this schema that the amino group from the amino acid is transferred to a-ketoglutaric acid, which then becomes glutamic acid. The glutamic acid can then transfer the amino group to still other substances or release it in the form of ammonia (NH3). In the process of losing the amino group, the glutamic acid once again becomes a-ketoglutaric acid, so that the cycle can be repeated again and again. To initiate this process, the excess amino acids in the cells, especially in the liver, induce the activation of large quantities of aminotrans-ferases, the enzymes responsible for initiating mostdeamination.

Urea Formation by the Liver. The ammonia releasedduring deamination of amino acids is removed from the blood almost entirely by conversion into urea; two mol-ecules of ammonia and one molecule of carbon dioxide combine in accordance with the following net reaction:

Essentially all urea formed in the human body is syn-thesized in the liver. In the absence of the liver or in serious liver disease, ammonia accumulates in the blood. This is extremely toxic, especially to the brain, often leading to a state called hepatic coma.

The stages in the formation of urea are essentially the following: 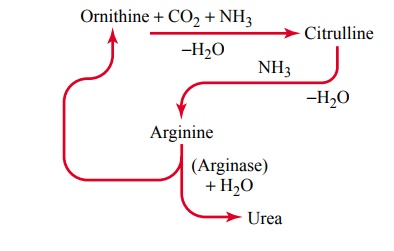 After its formation, the urea diffuses from the liver cells into the body fluids and is excreted by the kidneys.

Oxidation of Deaminated Amino Acids. Once amino acidshave been deaminated, the resulting keto acids can, in most instances, be oxidized to release energy for meta-bolic purposes. This usually involves two successive processes: (1) the keto acid is changed into an appro-priate chemical substance that can enter the citric acid cycle, and (2) this substance is degraded by the cycle and used for energy in the same manner that acetyl coen-zyme A (acetyl-CoA) derived from carbohydrate and lipid metabolism is used. In general, the amount of adenosine triphos-phate (ATP) formed for each gram of protein that is oxidized is slightly less than that formed for each gram of glucose oxidized.

Gluconeogenesis and Ketogenesis. Certain deaminatedamino acids are similar to the substrates normally used by the cells, mainly the liver cells, to synthesize glucose or fatty acids. For instance, deaminated alanine is pyruvic acid. This can be converted into either glucose or glycogen. Alternatively, it can be converted into acetyl-CoA, which can then be polymerized into fatty acids. Also, two molecules of acetyl-CoA can condense to form acetoacetic acid, which is one of the ketone bodies.