Of first infections, 90% are caused by Escherichia coli. The remaining 10% to 20% of UTIs are caused by other microorganisms, occasionally colonizing the vagina and periurethral area. Staphylococcus saprophyticus frequently causes lower UTIs.

An estimated 11% of U.S. women report at least one physician-diagnosed urinary tract infection (UTI) per year, and the lifetime probability that a woman will have a UTI is 60%. Most UTIs in women ascend from bacterial contamination of the urethra. Except in patients with tuberculosis or in immunosuppressed patients, infections are rarely acquired by hematogenous or lymphatic spread. The relatively short female urethra, exposure of the meatus to vestibular and rec-tal pathogens, and sexual activity that may induce trauma or introduce other organisms, all increase the potential for infection (Box 28.1). Estrogen deficiency also causes a decreasein urethral resistance to infection, which contributes to ascending contamination. This increased susceptibility may explain the20% prevalence of asymptomatic bacteriuria in women over the age of 65.

Of first infections, 90% are caused by Escherichia coli.The remaining 10% to 20% of UTIs are caused by other microorganisms, occasionally colonizing the vagina and periurethral area. Staphylococcus saprophyticus frequently causes lower UTIs. Proteus, Pseudomonas, Klebsiella, and

Use of spermicidal agents

Patients with lower UTIs typically present with symptoms of frequency, urgency, nocturia, or dysuria. The symp-toms found vary somewhat with the site of the infection. Symptoms caused by irritation of the bladder or trigone include urgency, frequency, and nocturia. Irritation of the urethra leads to frequency and dysuria. Some patients may report suprapubic tenderness or urethral or bladder-base tenderness. Fever is uncommon in women with uncompli-cated lower UTI. Upper UTI or acute pyelonephritis fre-quently occurs with a combination of fever and chills, flank pain, and varying degrees of dysuria, urgency, and frequency (Box 28.2).

The evaluation of the patient suspected of having a uri-nary tract infection should include a urinalysis.

Asymptomatic bacteriuria: considerablebacteriuria in a woman with no symptoms

Cystitis: infection that is limited to the lowerurinary tract and occurs with symptoms of dysuria and frequent and urgent urination and, occasionally, suprapubic tenderness

Acute pyelonephritis: infection of the renalparenchyma and pelvicaliceal system accompa-nied by significant bacteriuria, usually occurring with fever and flank pain

The initial treatment of a symptomatic lower UTI with pyuria or bacteriuria does not require a urine culture.

However, if clinical improvement does not occur within 48 hours or, in the case of recurrence, a urine culture is useful to help tailor treatment.

A urine culture should be performed in all cases of upper UTIs.

Urine for these studies is obtained through a “clean-catch midstream” sample, which involves cleansing the vulva and catching a portion of urine passed during the middle of uninterrupted voiding. Urine obtained from catheters or suprapubic aspiration may also be used. A standard uri-nalysis will detect pyuria, defined as 10 leukocytes per milliliter, but pyuria alone is not a reliable predictor of infection. However, pyuria and bacteriuria together on microscopic examination results markedly increase the probability of UTI.

“Dipstick” tests for infection based on the detection of leukocyte esterase are useful as screening tests. However, women with negative test results and symptoms should have a urine culture or urinalysis or both performed, because false-negative results are common.

Cultures of urine samples that show colony counts of more than 100,000 for a single organism generally indi-cate infection. Colony counts as low as 10,000 for E. coli are associated with infection when symptoms are present. If a culture report indicates multiple organisms, contami-nation of the specimen should be suspected.

Once infection is confirmed by urinalysis or culture, antibiotic therapy should be instituted.

Recent data have shown that 3 days of therapy is equivalent in efficacy to longer durations of therapy, with eradication rates exceeding 90%.

Recommended agents for the 3-day therapy include trimethoprim-sulfamethoxazole, trimethoprim, ciproflox-acin, levofloxacin, and gatifloxacin.

In cases of acute pyelonephritis, treatment should be initiated immediately. The choice of drug should be based on knowledge of resistance in the community. Once the urine and susceptibility culture results are available, therapy is altered as needed. Most women can be treated on an out-patient basis initially or given intravenous fluids and one par-enteral dose of an antibiotic before being discharged and given a regimen of oral therapy. Patients who are severely ill, have complications, are unable to tolerate oral medications or fluids, or who the clinician suspects will be noncompliant with outpatient therapy should be hospitalized and receive empiric broad-spectrum parenteral antibiotics.

Women with frequent recurrences and prior confir-mation by diagnostic tests and who are aware of their symptoms may be empirically treated without recurrent testing for pyuria. Management of recurrent UTIs should startwith a search for known risk factors associated with recurrence. These include frequent intercourse, long-term spermicide use, diaphragm use, a new sexual partner, young age at first UTI, and a maternal history of UTI. Behavioral changes, such as using a different form of contraception instead of spermicide, should be advised. The first-line intervention for the prevention of the recurrence of cystitis is prophylac-tic or intermittent antimicrobial therapy. For women with frequent recurrences, continuous prophylaxis with once-daily treatment with nitrofurantoin, norfloxacin, ciproflo-xacin, trimethoprim, trimethoprim–sulfamethoxazole, or another agent has been shown to decrease the risk of recur-rence by 95%. Drinking cranberry juice has been shown to decrease symptomatic UTIs, but the length of therapy and the concentration required to prevent recurrence long-term are not known.

Recurrence is most common in postmenopausal women; the hypoestrogenic state with associated genitourinary atrophy likely contributes to the increased prevalence. Oral and vaginal exoge-nous estrogens have been studied with varying results. 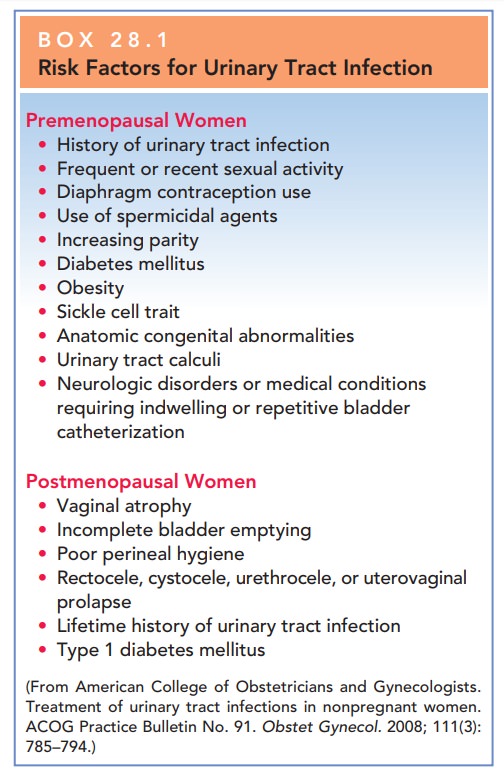 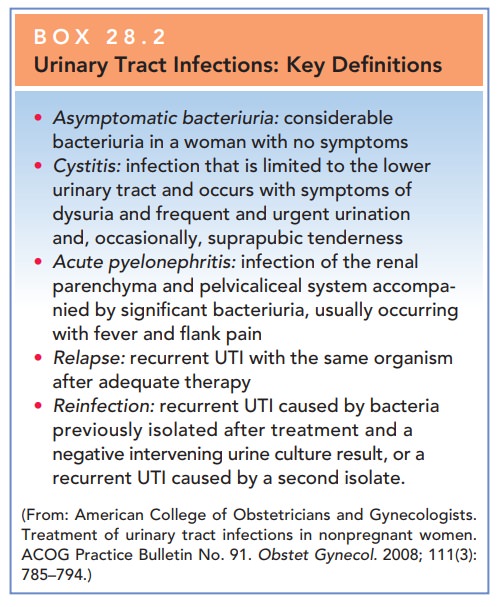